Euphoria and Beating the TV Disease

Despite its thoroughly mediocre writing, Euphoria has some of the best filmmaking and acting of any TV show airing now. 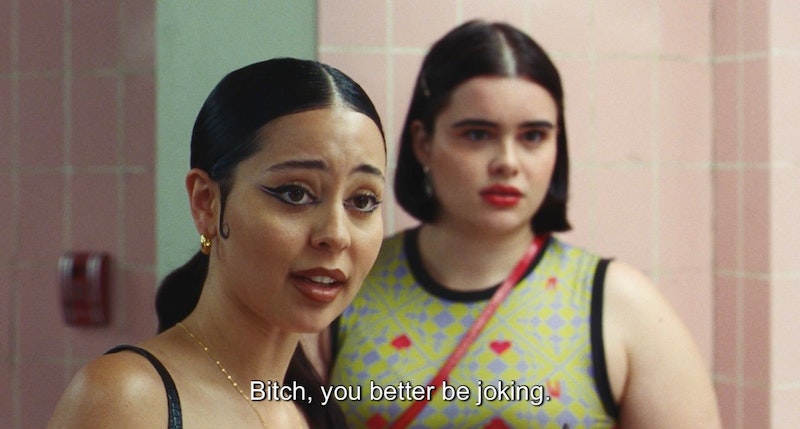 One of the most refreshing aspects of Euphoria is that it doesn’t suffer from the TV disease: dozens of setups and coverage for simple dialogue scenes, constant cutting, creating something “watchable” but visually incoherent. No wonder one feels so empty and unfulfilled after finishing a series or a season finale; television has no aesthetic of its own, as Richard Brody convincingly argued last week on Twitter (with his colleague at The New Yorker, Emily Nussbaum). A show like Mare of Easttown would’ve made a great two-and-a-half hour movie in the vein of Manchester by the Sea, and as good as the writing is on Succession, it’s a visual disaster, with horrendous handheld photography that belongs in 2007 and enough important shots that are out of focus that would disqualify a student film.

Euphoria—written, directed, and created by Sam Levinson—never approaches the quality of writing on Succession, but unlike so many other recent lauded series, it never feels uneven, with one character or one element far overdeveloped past the undercooked sidekicks and abandoned subplots. Levinson’s working methods are indefensible—how can you show up to a 16-hour shoot without a shot list?—but the filmmaking on Euphoria, particularly in this second season, is the best I’ve seen in contemporary television. It’s still not particularly good, with too many loose ends and inserts clearly meant to signal potential future “plot points” or to cover the creator’s ass when it comes time to write a new season.

Like Brody, I don’t want much TV (though I’m assuming he swears it off completely), but when I do, I wait until it’s all done, a series or a season. Television shows, particularly since hour-long episodes became standard, destroy your attention span and establish a completely different relationship with its audience than a film, play, book or an album. The way people watch TV and write about TV now is closer to the way people used to follow bands, and still do—look no further than Mitski being chastised for asking her crowds to put their phones away at her concerts… by people who called her ableist. The energy behind this is the same as always: ownership of entertainers and artists by a public that only wishes they could be them and have what they have. The crowd will always tear down their object of fascination.

A self-contained work isn’t burdened with this psychosis, but because of its format and a timeline that runs several years rather than a few hours, television will always produce writing this dumb: “But girl, the bullsh-t has got to stop somewhere. Besides the environment on set, Zendaya didn’t think Barbie’s storyline fizzling to almost nothing was weird? She thought McKay, who was left naked and crying after being hazed by fraternity brothers last season, was fine sitting this season out? […] As a viewer, this season is entertaining AF, but the product has room for improvement. As an actor on the show, it sounds like your experience can be wildly different depending on weather or not you’re Sam’s favourite. I think Zendaya, who is obviously Sam’s ultimate favourite, better not be oblivious to how her showrunner is running her show.”

“The product”? “Sam’s” favorite? Sam Levinson created the show. He and the actors can do whatever they want and owe the audience nothing. I love Euphoria’s formal flights of fancy, from the super-16mm sequences where Rue (Zendaya) gives a rundown on dick pics or plays out a good cop/bad cop manic fantasy with Lexi (Maude Apatow, the breakout star of the show), to the fake “behind the scenes” featurette on Lexi’s play, to the overture that opened last week’s episode, another dazzling exercise in swimming between reality, flashbacks, and a stage play. Perhaps the most inspired choice of the season was the use of Tupac Shakur’s “Hit ‘Em Up,” the best diss track of all-time and one of the most angry, violent, and invigorating songs ever recorded, to soundtrack Fezco (Angus Cloud) beating the shit out of Nate Jacobs (Jacob Elordi).

Beyond irresponsible working methods and clashes with actors, I have no idea why HBO is allegedly unhappy with the way season two came out compared to the first one. After the superb Christmas special last year, featuring, for the most part, just Rue and her sponsor Ali (Colman Domingo) in a diner talking about living as a drug addict (a companion special focused on Jules—Hunter Schafer—and her therapist should’ve just stuck to her and her therapist, like the other special; the constant cutting of the TV disease rears its ugly head here), I don’t know why so many fans were so upset with the “slow” pace of these new episodes. The first episode starts with Fezco’s grandma shooting his dad in the dick! His little buddy Ashtray kills a major drug dealer! This shit is fucking great! Why is HBO mad? It’s not more explicit or violent than the first season; if anything, it feels like every character, even Nate, is trying to pull back just a bit from the insanity that happened “last year.”

Since the 2020 Christmas specials, Euphoria has been shot on 35mm film, with a single camera. Once again, Levinson coming to work without a shot list and causing days to go twice as long as they should is inexcusable, but the filmmaking is just better than anything else on TV right now. It’s not Spielberg’s West Side Story, but on Euphoria, the camera flies, glides, and dances. It’s obvious they’re working with heavier equipment because the camera moves much more deliberately now, with complicated tracking and dolly shots involving mirrors and lasting multiple minutes, almost always completed with intent, not just another piece of coverage. Watching Euphoria reminds one that even if television may not have an aesthetic of its own, it doesn’t have to settle for being the deformed, bastard child of its parent medium. Euphoria is as well-made and composed as any beloved auteur’s latest: to wit, Lexi’s play episode made me think of the Lucy Doolittle section in Licorice Pizza throughout, and how Levinson was not only matching but often surpassing the indie god Paul Thomas Anderson.

Apples to oranges, but Euphoria and Licorice Pizza do have a bit in common. The latter’s rearview into adolescence is much warmer than the former’s, but it’s similarly lacking and disjointed in ways that are particularly hard to articulate without sounding reductive. I’ve already written about Licorice Pizza and its dysfunctional episodic structure, but the biggest drag on Euphoria is the writing, and how close it is to being pretty good. Along with that, it’s obvious that Levinson shoots and writes far more than makes it into the show, and as always, the work suffers. Loose ends left unexplored aren’t necessarily a killer, but a TV showrunner has to cover their ass because their work isn’t done yet. In the meantime, fans and the media will say their piece and get involved, something that should never happen and the thing that will keep television from ever reaching its full potential as an art form.