A 2003 Fresh Air interview with cartoonist and executive producer Aaron McGruder vs a 1980 Mark Stevens interview with the late artist Philip Guston. 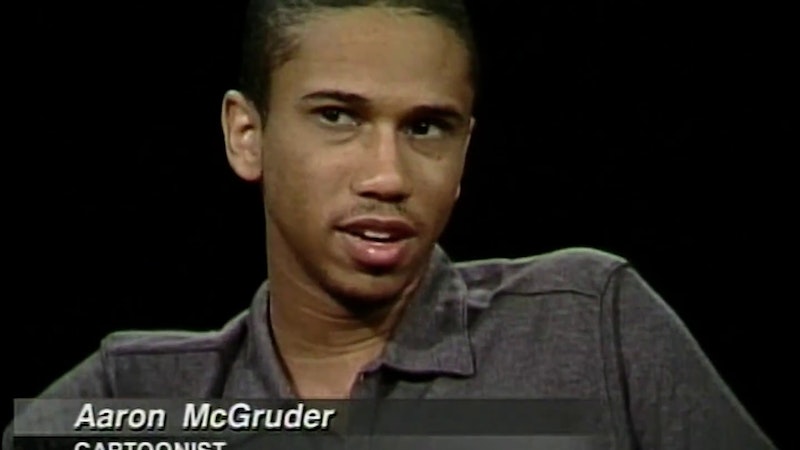 Philip Guston: If you have the proper writing, advertising, blurbs, you’re set.

Aaron McGruder: All the stuff is easy after that.

Guston: That’s why I taught. Of course, it’s impossible.

McGruder: When you're doing it alone and everything has to come from you and it's not there, there's nothing to do but panic as the clock ticks and the deadline approaches.

McGruder: Yes and no. I mean, I was having a good time and just trying to say things that I realized needed to be said but that nobody else was going to say.

Guston: But that’s been the story since the cavemen, only the styles have changed.

McGruder: But it was on for, like, a season and a half, maybe like two seasons at most.

Guston: Then you go into the house and you go to sleep and you wake up in an hour convinced that you’re kidding yourself.

Guston: Someone once said to me, “Doesn’t this make you sad?”

McGruder: It's like—I think it's Sisyphus, I believe, is the guy that has to sort of push the boulder up the hill and then it keeps rolling down.

Guston: In the beginning the canvas is empty and you can do anything, and that’s the most frightening experience.

—Raymond Cummings has written for Splice Today since 2010