Bringing It All Back Home

Girl From the North Country takes Bob Dylan to the theater. 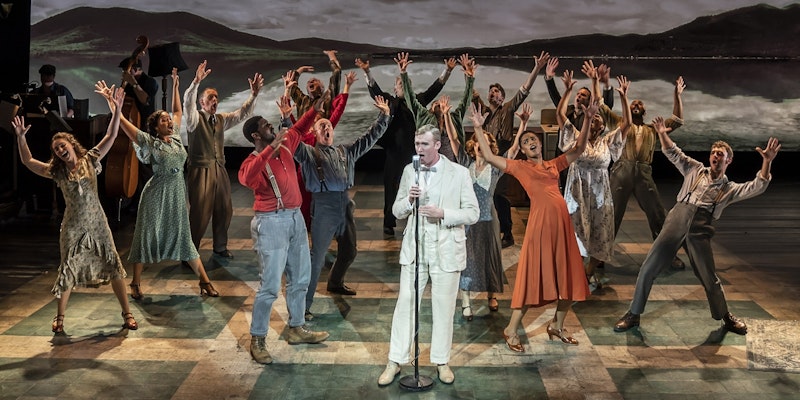 After two weeks writing my new column on standup comedy, I need a break. So I pack my bags and book a vacation to the UK, with plans to take in some old-fashioned theater. Something about watching actors tasked with memorizing hundreds of lines and complex choreography helps remind me of how easy it should be for me to remember 10 minutes of jokes I wrote back in 2019.

Arriving in the Dublin Airport, the long walk to ground transportation is lined with advertisements for the Dublin debut of Girl From the North Country, Irish playwright Conor McPherson’s hit musical based around the sprawling catalog of Bob Dylan (currently at the Olympia Theatre through July 30th before a yearlong tour of the UK). It’s not unusual for songwriters to enlist playwrights to adapt their music to the stage in the form of a “jukebox musical.” Dylan did it once before, on 2006’s universally panned The Times They Are a-Changin’; others in this unfortunate genre include Queen’s We Will Rock You and Billy Joel’s Movin’ Out. That one would deign to take the dense, highly subjective lyrics of an artist like Dylan and reverse engineer a musical around them shows how little the business understands or appreciates the work it seeks to capitalize upon.

Girl From the North Country is different. McPherson’s story lightly alludes to Dylan—set in his hometown of Duluth, featuring a black boxer character à la Hurricane Carter, involving a “Girl From the North Country”—but mostly refuses easy parallels. McPherson instead channels the spirit of Dylan’s discography and live performances to tell his own story, the musical equivalent to what Noah Hawley did with the Coens’ filmography in FX’s Fargo, and in doing so makes a strong case for Dylan as the Greek chorus of modern American life.

Enough has been said about Dylan’s work already, so I’ll skip the analysis. I can’t begin to explain what a line like “Never could learn to drink that blood and call it wine” actually means, nor would I want to. I get the sense that McPherson feels likewise, and that attempting anything even approaching a stage adaptation of Dylan’s lyrics, as The Times They Are a-Changin’ tried to do, would strip them of their significance. (This was my main criticism of Todd Haynes’ I’m Not There: aside from playing fan service, the abundance of references and allusions to Dylan’s lyrics served mainly to overlap one another, clarifying very little about the artist, his work, or the musical canon from which it emerged.)

Much to the annoyance of the largely boomer-aged audience, several of whom I heard complaining during intermission about the lack of recognizable songs, the tracks McPherson chooses include very few 1960s hits (“Like a Rolling Stone” and “I Want You” being the most famous), instead opting for fan favorites (“Tight Connection to My Heart,” “Idiot Wind”), Christian-era cuts (“Slow Train,” “Pressing On”), and late-career masterworks (“Duquesne Whistle,” “Make You Feel My Love”).

Aside from maybe “Hurricane,” none of these selections feels out of place in the surrounding Minnesota melodrama, which concerns a group of lost souls in a guesthouse off the shores of Lake Superior during the height of the Great Depression (over six years before Dylan was born). Through inspired staging and arrangement, McPherson teases new meaning out of the material: “Went to See the Gypsy,” a song Dylan wrote about meeting Elvis, is transformed into an account of a purgatorial love affair; “Like a Rolling Stone” doubles as a reckoning with Depression-era precarity; “I Want You” becomes a sad requiem for doomed love (the arrangement will sound somewhat familiar to any fans of Dylan’s At Budokan). What distinguishes Girl From the North Country from other jukebox musicals is that the songs draw meaning from what’s happening onstage, and not the other way around.

Aside from McPherson’s clear understanding of Dylan’s lyrics and how to best incorporate them into his play, he also shows a strong grasp of Dylan’s live presence and the tradition of live performance he embraces. During a quick introduction, one of the cast members explained that five other cast members were out with Covid and had to be replaced by understudies, and two of those understudies also got Covid and had to be replaced last minute. Besides serving as a reminder that Covid is still real and emphasizing the hard realities of touring with an ensemble in a post-pandemic world, this impromptu preface highlighted the ways in which McPherson’s production mirrors some of Dylan’s own long tours—particularly his legendary Rolling Thunder Revue—not just in the epic schedule but also the way in which the play, in classic vaudeville tradition, consciously draws attention away from its star to an eclectic cast of supporting musicians. The musicians mostly stay in the rear stage, filling scenes of dialogue with instrumental renditions of classics like “Tonight I’ll Be Staying Here With You” and “Blind Willie McTell,” but McPherson allows them moments front and center, most notably during a beautiful drummer-led rendition of “Sweetheart Like You.”

It may seem odd, traveling to Ireland to see a musical so expressly concerned with life in the States, to fly halfway across the world to listen to the same songs I listen to in my car. But just as Fitzgerald’s Nick Carraway fled to the East Coast only to get sucked into a “story of the West,” I left the States only to find my way back in the darkness of a theater. The magic proscenium brings it all back home.