In the Name of Supreme 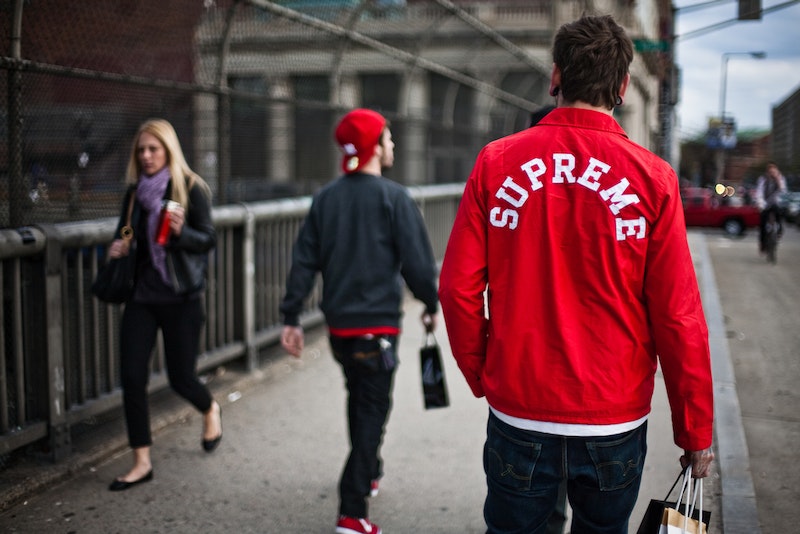 Not the best day to be writing about a book called Supremacist. The new novel by David Shapiro does not feature the KKK, Daniel Carver, the Westboro Baptist Church, Donald Trump, Darren Wilson, George Zimmerman, or any other public enemies. It’s about the clothing brand supreme and one man’s obsession with it. The book—a real breezy read, full of short chapters and pictures of Supreme merchandise—is heavily reminiscent of Tao Lin’s Taipei, Noah Cicero’s Bipolar Cowboy, Ben Lerner’s Leaving the Atocha Station, and Sam Pink’s Person. However, it’s refreshingly light-hearted compared to the severe ennui and alienation of the aforementioned writers. In Taipei, Lin described the seasons in a year as “a square, sarcastically framing nothing.” In Supremacist, Shapiro takes his old friend from college, Camilla, on a trip to every Supreme store in the world. He talks about rape in the Talmud at a dinner with friends and upsets a mutual friend who was sexually assaulted. He asks a man in a Japanese bar what his tattoos mean, knowing full well that the only people in Japan that have tattoos are members of the Yakuza. He sits outside of the Los Angeles location of Supreme for six hours, touches all the clothes, and stares “the white guy from Odd Future” working there until the guy gets scared. He’s an intentional ignoramus, a wannabe Larry David downing vodka and tranquilizers and constantly making everyone around him uncomfortable. And Camilla is there to ask what we’re all thinking: “Are you fucking retarded?”

The best moments of the work of Tao Lin, Ben Lerner, Mira Gonzalez, and Spenser Madsen’s are the funny bits, the stuff they usually relegate to their tweets or the lighter moments of their books. It doesn’t pop up in poetry. Supremacist is a remarkably unpretentious novel for its genre, where hilarious and absurd observations collide with trite existentialism. Taipei is the only alt-lit book so far that’s gotten the mix just right, but no one that I’ve read has such a disinterest in deepness as Shapiro. He’s admittedly not a career writer—he’s a practicing lawyer, though his fictionalized self in the book is studying to become an actuary. Shapiro’s fascination with the mission and ideology behind Supreme are real, though. Shapiro told Hypebeast: “I’m not who they want to be associated with. And that’s sort of what the book is about: I’m an unwelcome customer and a lot of people feel like unwelcome customers and that’s what makes it appealing. They don’t want your money, they don’t want your attention… There is an older brother quality—Supreme guides you through the parts of the world that they think are important and worth paying attention to and it’s not just trying to sell you what they make, but the ideas that they think are worthwhile.”

But it could also be bullshit, and Shapiro realizes that. This somehow endears him to the handful of people he meets along the way. Shapiro—the writer and the character—knows he’s fucking retarded. He rolls around in his own shit and makes awful jokes, in dialogue and in the text (“Hey, can you come upstairs? There’s a photo of a huge penis. I feel like I’m inside Reddit. It’s fucking amazing.” “The problem is that it’s not in my head. All the hair I used to have, I mean. Rimshot.” “Read half a VICE story on Pocket. Thought about killing myself.”) This book is about monomania, being an unabashed fan of something that very few people will understand, and knowingly acting in a way that will alienate everyone around you. Other than the provocative title, Supremacist is free of self-obsessed baggage and it's an amusing way to spend an afternoon.