If You Say You're Charlie, You Ain't Nobody

And what about that woman who tweeted about AIDS? 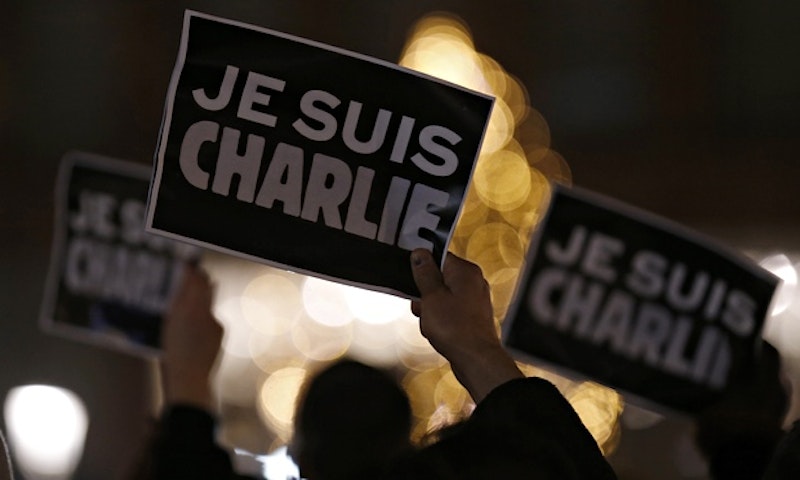 Being a good person now involves saying “Je suis Charlie.” In fact this is the most notable main feature about being good, as of now: you say “Je suis Charlie.” If I want to be good, then I’ll do as I'm told. This same operation has been pushed through so many times in the recent past. I remember when being good involved hating that woman who tweeted about not catching AIDS in South Africa. She lost her job because of a tweet and I was supposed to feel glad about that, or else I didn't care about racial equality or the sadness of AIDS or something.

Everyone expressing the same opinion at the same time, and feeling like they deserve a cookie because they're doing it; that's being an enlightened adult today. The conservatives always said that was our racket. Smarter progressives said the same thing, now and then, to keep their hand in. (Alan Bennett, now a gentle great-grandmother to the English nation, wrote TV sketches about the trendy leftist juggling of opinions back when Russia was invading Czechoslovakia.) That self-awareness is gone. With the Internet and Twitter we've become more basic in our pursuits. The mongering of opinion is all that we care about. Get everyone lined up with the same expression on their faces—that's progressive opinion.

Do I know that the “Je suis Charlie” people are the same people who hounded that yuppie out of her job? Well, no. But I bet the people listening to them are the same. It takes a certain type to change your profile picture and think you're getting something done, and that type doesn't look too closely into first reasons. There's a thrill to be had, and you get it by a click. Or you can go the whole hog and stand in a street with a sign. But try doing that alone. You won't, of course, that would defeat the purpose. Solidarity means everybody doing it together.

Which is to say, it's clumping. There is a bit of courage involved in France, since theoretically the terrorists could make note of your face and mark you down. But there's no moral courage. Everybody is doing it; when that's the case, moral courage goes out the window. You may still be right, but you're not a hero, no matter how your cheekbones loom above your austerely designed placard. You say you don't think you're a hero? Okay. Sure.

The cartoonists and I share this: we both want to use our right to free expression, and we are both under threat if people with guns try to take it away. We have that in common with Hustler magazine, the Westboro Baptist Church and the redoubtable men at Stormfront, and I don't think I would hold a sign for any of them.

As for the people who keep telling us how we're supposed to feel and what human wave we're supposed to be taking part in—no thanks, and you aren't Charlie either. From what I've seen, Charlie wasn't the greatest thing. But he was still a cut above you.