I'd Seen Them on MTV

The famous people you sort of recognize. 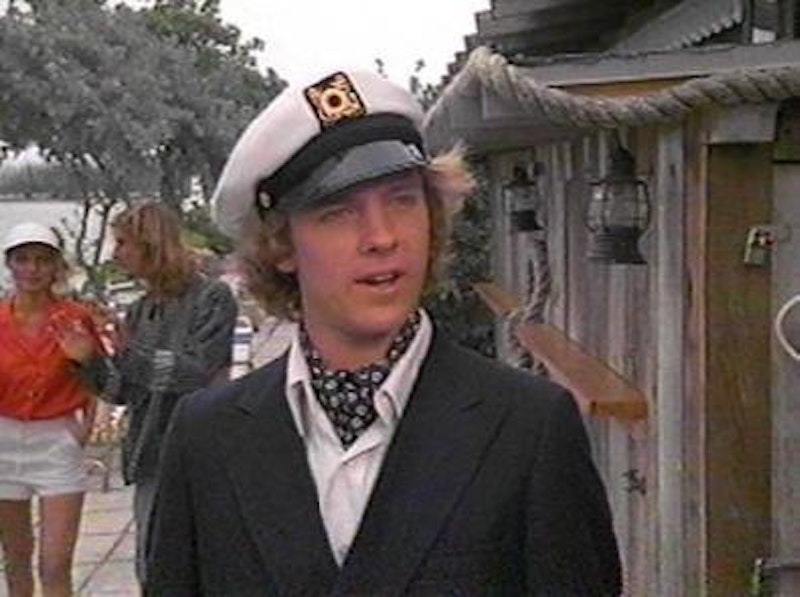 I recognized them, but couldn't tell you their individual names or what they called the band. I'd seen them on MTV. One had long blond hair and looked exactly like a guy that you'd expect to be in a rock band. He was the lead singer. The other guy looked kinda nerdy with his glasses, button-down shirt collar, slacks and coat. He also wore a baseball-type hat but with a slightly longer bill, the kind that I'd seen on him in the videos.

It was around lunchtime on a weekday. The place was a Mongolian BBQ restaurant in East Hollywood. The two bandmates each had their respective bowls piled high with various meats and vegetables for the cook to prepare on a big round grill. As I was loading up my own bowl, heavy on the lamb, I tried to remember what they were called. Nothing. A big Mexican guy was stir-frying their food on the grill. It'd be done in a couple of minutes. I ladled some oyster sauce on the ingredients and stood behind them near the grill. I kept racking my brain, but couldn't even hum one of their tunes. A muffled radio was playing in a back room. A fan turned overhead. No one else was in the place other than the three of us and the cook. May as well ask. "Hey," I said to the nerdy guy, "what was the name of your band?" He half-turned to me as if he didn't want to be bothered or lose concentration on his lunch being cooked. He answered in a low voice that sounded like ee ehk.

This didn't ring any bells. Who, I thought? And said to him, "What was that?" And this time out of gritted teeth and a clenched jaw and a little louder, and on an exhale said, "Cheap"—and took a beat and a breath then started to say the next word, "Trrr"—when I suddenly remembered and finished with him "Trick. Yeah, Cheap Trick. Yeah, you guys were…" And the Mexican chef butted in, handing the bandmates their bowls and they hurried away.

Wanda: Wanda worked as a maid for the Reich family on Staten Island in the 1960s. Little Richard Reich and his slightly older brother loved to antagonize Wanda. They’d mimic her. They’d leave fake spiders around the house and laugh when she’d scream with the discoveries. They’d take dumps and forget to flush the toilet. All kinds of annoying stuff like that. They loved to push her buttons and get a reaction. One time they made her so crazy mad that she chased after them with a kitchen knife. They thought that was great!

Richard Reich grew up to be the lead actor in a Scientology training film, The Secret of Flag Results! Among Scientologists he was a star, but trust me, don't go out of your way to see it.

When Richard was a kid, one day Wanda decided on a way to impress upon the two bastard Reich brothers that she was a woman of considerable talents and worthy of respect. "Green Onions" was playing on the radio. She cranked up the volume and danced to it, pumping her arms and swaying her hips. After a minute she turned and walked up to them as they watched television and stood in front of the screen. "Move!" They screamed. She didn't and turned down the sound. "Hey!" They shouted. And Wanda said, "You know that band, Booker T and The MG’s? On the radio?"

Jane said: I was a raw newcomer at a meeting trying to get clean in an anonymous program. The 25-minute speaker had finished and there was a break. I got up to get a cup of coffee. A red-haired girl from Boston that I knew a little was talking to a dark-haired girl with bad skin, a girl that I heard identify as a returnee after yet another slip. I put some artificial sweetener in my coffee and heard the dark-haired girl say, "I'm gonna step outside for a smoke." I stirred my coffee with my finger as she walked away. The red-haired girl said to me, "Hey, you know that band Jane’s Addiction?" And without waiting for an answer she nodded her head towards the door and said, "That's Jane."

Close thoughts on the Far East: Michael O'Keefe, the Academy Award-nominated actor from The Great Santini and the kid from Caddyshack, was married for a while to musician Bonnie Raitt. One day at the airport they ran into Bo Diddley. Bonnie and Bo knew each other and exchanged greetings. Bo had just gotten back from a gig in Japan and O'Keefe, who aside from being an actor happened to also be a Zen priest, was particularly curious to hear Bo's impression of Japan.

Bo said, "Them… is some bowin' motherfuckers!"