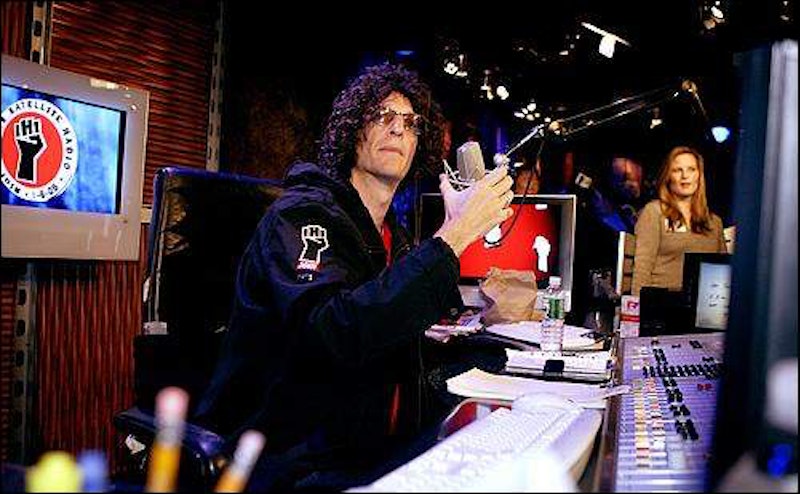 Off terrestrial radio for just over seven years, Howard Stern is still seen by too many people as a puerile, moronic, homoerotic sexist with the rhetoric of a skunk, whose show orbits in the Limbaugh/Imus/Beck Axis of Evil and bad taste. He’s dismissed without review as a dinosaur with no skill or cultural relevance, spreading his ass, parading lesbian mothers and daughters around, forcing women to ride the Sybian. Even if his show is no longer omnipresent in every market, there’s a substantial archive of interviews and full shows on YouTube going back to the late 1970s. Forget about the sex obsession, the penis envy, the juvenile jokes, and the worship of pouty-lipped sex kittens; Stern’s skills as an interviewer lap almost everyone in show business. Since the late 90s, his interviews are less prurient and voyeuristic and much more like a therapy or psychoanalysis session, and many who’d appreciate his ability to get uptight public figures to speak with candor about their lives don’t know what they’re missing.

There are so many excellent, amazing pieces of radio here: Victoria Jackson’s daddy complex and ragingly biblical values, Scott Weiland on drug abuse and being molested by an older boy as a pre-teen, Kara Dioguardi on being raped by one of her record label bosses, Bryan Cranston’s days as a struggling, nobody actor, Fred Armisen revealing himself to be emotionally aloof and distant, Whitney Cummings on antidepressants, having a drug addict sister, being ambitious and getting trashed for it, Courtney Love dismantling a porn star’s shitty attempt at a pop song to her face, Steve-O on being sober and happy.

Most of these people, I don’t care about their work, or what they do, and I’m not necessarily a fan. But a good interviewer can make any subject fascinating. I leave these hour-long interviews on as background usually, and I’ll find myself going back to certain ones over and over as you would a song.

With weight to throw around and favor curried with half the entertainment industry, people that come on Stern’s show feel more comfortable and willing to open up and go places emotionally then they ever would speaking in monotone to the airhead with an Access Hollywood microphone. Scott Weiland’s interview above is particularly moving, and I’m by no means a fan of Stone Temple Pilots fan, but they way he sort of begins to break down and clam up when talking about being raped by an older boy at 12, probably not having expected to speak about anything that heavy, but going there anyway because the environment is right—that is compelling storytelling. The work most actors who come on the show do is just so completely uninteresting when compared to an emotionally vulnerable and unguarded analysis of their life thus far, what motivated them, if a childhood trauma led to drug abuse, if an early death of a loved one made them who they are today, how happy or depressed they feel today.

All of this great, enriching humanistic stuff is so unrelated to Stern’s reputation. Charlie Rose? Please, eat your heart out. Howard Stern knows how to eke out a life story.