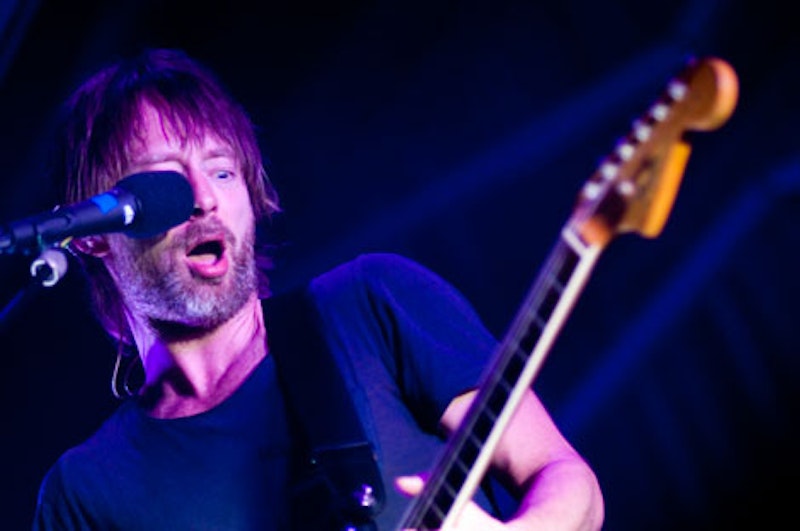 When The King of Limbs arrived earlier this year, it was greeted by a bevy of mildly salivating, furrowed-brow think-pieces that pondered whether Radiohead had settled into a holding pattern, whether they’d lost their egghead edge, whether the band’s most fervent apologists even had a right to demand exponential sonic envelope-pushing. Of course, none of that’s really important right now. In the wake of Radiohead’s Saturday Night Live performance this past weekend, the concerns of the coast-hopping blogeratti should be concentrated squarely on Thom Yorke’s mane.

Yorke has long favored a close-cropped, almost-monkish coiffure, an undeniably multi-purpose and utilitarian look: clean, simple to maintain, corresponding nicely to his ever-present facial stubble, a non-distraction during impassioned epilepsy-inspired live performances. Yet Saturday, dancing and hopping about the SNL stage in an all black suit, clutching four blood-red maracas for dear life, Yorke seemed less like “Thom Yorke” than “an inebriated circa-1994 Eric Stoltz” or—somehow worse—“an off-duty, be-wigged Thom Yorke impersonator who kidnapped Yorke during rehearsals, stashed him in a Brooklyn sub-basement, and essentially got to live out some kind of ultimate Radio uber-fan Make-A-Wish karaoke fantasy in front of millions of viewers while the rest of the band rocked on unawares.” Thus what might have been a triumphant spin through “Lotus Flower” was rendered wholly parodist—almost ironic—letting the air out of the already air-less SNL season premiere.

As I see it, Yorke now finds himself at crossroads, hair-wise: buzz it down to the bare roots in first-principles solidarity with his mid-00s soldier-on-leave do’, or grow that sucker out to obnoxious Michael McKean-in-This Is Spinal Tap lengths for extra-gnarly head bang/bop festival visuals. Or go in for pigtails, or braids, like Axl Rose. Anything’s better than the stylist’s miscarriage he’s stuck with today.