How to Make Sense of How To Make It In America

A Guide to the Soundtrack. 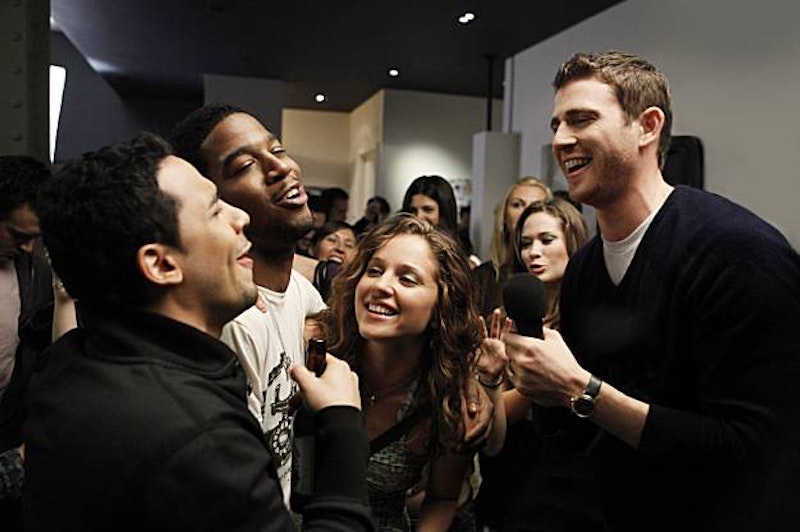 You’re twentysomething. You’ve graduated and now live in the big city– that is, New York. You have a small apartment with a friend or a few of them, and you are trying to navigate through this new state of post-college pre-adulthood. Don’t know what I’m talking about? Go watch it for yourself on TV. HBO’s How To Make It In America aims to capture the world of young underground New York, the grittiness and glamour combined, for a national audience. After this weekend’s second season opener, we are re-acquainted with Ben and Cam as they continue to build their nascent denim and t-shirt brand Crisp. I was pretty interested in the episode’s soundtrack, and how well it portrayed a distinct subculture of New York kids trying to make it in the New York fashion scene. Below is a selection of the songs featured and how it connected with the accompanying scene and characters in it.

“Do you have anything to claim?  No, just my undying love for New York.”

After a trip to Japan the protagonists return to New York and are welcomed with a party thrown by friend and self-made millionaire David at his penthouse. They are reunited with other friends and even meet Misshapes DJ Leigh Lezark. Although it’s true that everyone knows—or at least knows of—someone wealthy and with the income to support financially your absurd artistic exploits, like a denim brand called Crisp, the likelihood that Lezark will show up to a house party is pretty slim. She has her own bacchanalias to host; but she, too, will probably play Cut Copy.

“Maybe we can do something about ‘fetish,’ but still completely post-feminist.”

When the crew decides to launch a pop-up shop in order to get more brand exposure, friend Domingo (played by hip-hop artist Kid Cudi) helps Ben recruit a set of Asian dancers to participate in what will be the party’s entertainment: a Japanese “fetish show.” Of course a self-described feminist and her dance crew would groove to “Bump” which features an empowered female rapper talking about how delicious her pussy is; of course she would get insulted by the idea of her in a fetish show; and of course she would agree to do it after Domingo coaxes her with some “Cali kush.”

“The people look dirty to me. Imma kill you if I get bed bugs up in here.”

A “fashion” party in the Lower East Side fails to meet the expectations of street hustler and entrepreneur Rene when he and his girlfriend are greeted by a swarm of bearded and greasy-haired hipsters at the pop-up shop. Obviously, if you are going to a party in the LES hosted by a streetwear brand, don’t look like you’re going to have cocktails at a midtown hotel bar. Later in the night, Ben’s ex-girlfriend Rachel has an awkward encounter with Ben’s current girlfriend Julie. Rachel, who is jobless and has just returned from traveling abroad, was previously seen shopping for a new party outfit. Yes, although she most likely spent most of her savings trying to “find herself,” she can still entertain the idea of buying a Phillip Lim dress because broke New York people always have some money for fashion. After meeting Julie, Rachel tries to evade the situation but is dragged along to take provocative photos with the Japanese “fetish” performers while “Let’s Make Nasty” plays, a questionable song choice though catchy as hell. The song, though appropriate music for a club or a rager, doesn’t seem to fit during a downtown hipster party where people are idly standing around drinking out of their Solo cups.

Inevitably (if not already), How To Make It In America will receive much criticism about its portrayals of the New York fashion scene. Insiders who watch the show will ask: “Who do these people think they are?” The scenesters will contest: “These guys would not be able to get into that place.” And “New Yorkers” will challenge: “These are wannabes.” However, what How To Make It In America accomplishes is a visualization of New York ambition. It’s about kids from the hood with aspirations to experience the finer things the city has to offer. Indeed, anyone who comes to the city wants that; aren’t we all trying to climb some sort of metaphorical ladder? If you put aside the matter of how well it captures this particular New York zeitgeist, How To Make It In America, with its diverse characters all striving to get somewhere, tells us that you can be anywhere on your respective ladder but there are always people higher or lower on theirs.