H.L. Mencken and the Art of Self-Examination

Is anyone paying attention anymore? 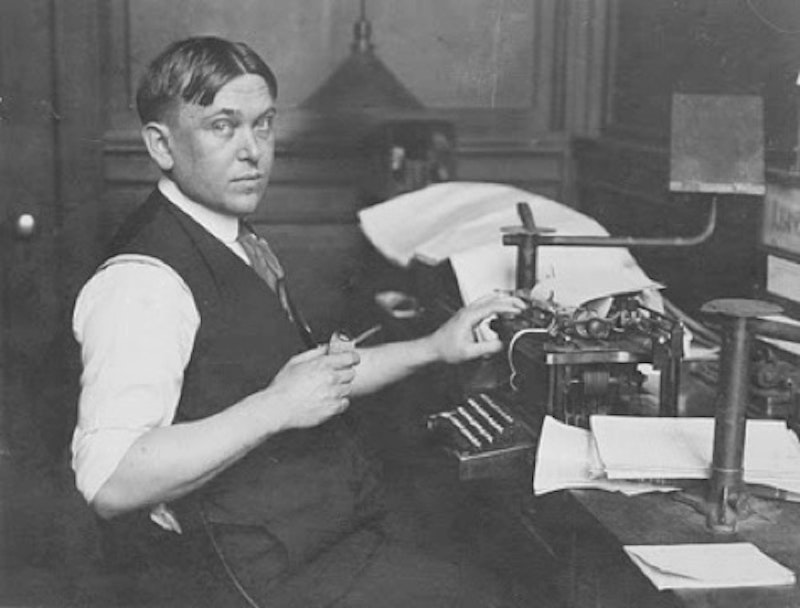 And there blazes in my memory like a comet the day when she came home from Hollins Market complaining with strange and bitter indignation that the fishmongers there—including old Harris, her favorite—had begun to sell shad roe. Hitherto, stretching back to the first settlement of Baltimore Town, they had always thrown it in with the fish. Worse, she reported that they had now entered upon an illegal combination to lift the price of the standard shad of twenty inches—enough for the average family, and to spare—from forty cents to half a dollar. When my father came home for lunch and heard the incredible news, he predicted formally that the Republic would never survive the Nineteenth Century.” H. L. M., “The Baltimore of the Eighties”

H. L. Mencken’s essay on coming of age more than 100 years ago in Baltimore illustrates how the Martin Luther King, Jr. riots of 1968 dramatically and seemingly irrevocably shattered our city. We retain the ineffable quixotic, strange atmosphere portrayed in Mencken’s writing, but for the several decades, Baltimore’s divisions have only deepened, through white flight, drugs, lack of development, and a tragically inept state government that’s either powerless or simply not interested in addressing the de facto segregation that alienates everyone in our city.

But enough apocalyptic dread. Do we have any sages like H. L. Mencken left? Maybe Jon Stewart, certainly Neil DeGrasse Tyson: people on pedestals dispense nuggets of wisdom on human behavior, our colossal delusions and missteps, and evangelize on behalf of the rest of us that we can do better. What matters is that no one’s listening. Mencken was influential and his ideas lasted because he was widely read, in an era before any electronic distractions. His wisdom is still just as biting and urgent:

“We must respect the other fellow’s religion, but only in the sense and to the extent that we respect his theory that his wife is beautiful and his children are smart.”

“The whole aim of practical politics is to keep the populace alarmed (and hence clamorous to be led to safety) by menacing it with a series of hobgoblins, all of them imaginary.”

“The fact that the average man’s love of liberty is nine-tenths imaginary, exactly like his love of sense, justice, and truth. He is not actually happy when free; he is uncomfortable, a bit alarmed, and intolerably lonely.”

None of these defects in human nature have changed one bit, and with almost three times as many humans on Earth now as there were when Mencken died, it’s impossible to say that the general decay of human life Mencken’s father bemoaned is imaginary. It’s frightening to read authors as ahead of their time as Mencken, because the dire issues they raise are monstrously worse today.

Nearly every generation thinks it’s witnessing the decline and decay of civilization themselves, but with wicked weapons, institutionalized indifference, and a homicidal/suicidal urge in the air (at least here in America), one can’t help but feel powerless against the monumental stupidity and primitive violence of the rest of the race. Not trying to wallow here, I’m just scared. Despite “great epidemics” of typhoid fever every summer, “waves of malaria” in autumn, and a “scattering” of smallpox in the winter, Baltimoreans of the time agreed with “envious visitors” that their town was swell. Many today would tell you the same, despite all its problems.

People don’t want to ponder the implications of mass shootings, the vanity of social media, or impending terrorist attacks, because it’s too mammoth a burden to bear, and anyone who hasn’t had their bubble popped aren’t looking for pins. We need journalists like Mencken, but any public figure’s stature and import has been so diminished by the flattening effect of globalization and mass media that people just won’t bother to pay attention. The severe brutality of the militarized police forces visited upon protesters last fall and the utter indifference that followed shows how spot on Aldous Huxley, not Orwell, was: there will never be outright fascism and totalitarianism in the USA, but we’re quickly reaching a point where we’re so anesthetized that uprisings won’t happen, and when they get quashed, no one will care.

Optimists point to essays like Mencken’s, which illustrate how the Baltimore of the 1880’s was no less screwed up and obliviously content as it is today, as if a cycle like that can continue forever. I have no answers or solutions other than to read, listen, and encourage the smartest, wisest, and bravest among us. But it’s a call that will fall on deaf ears. In the face of endless calamities and tragedies in high-definition, the urge to turn inward and feed into an online persona and stare at pictures of us or re-tweet compliments is almost overwhelming. If Mencken’s warnings went unheeded, what hope do we have for a better tomorrow, if no one’s paying attention, or worse, if no one cares?