Graduation Ceremonies Are for Insomniacs

Much younger keynote speakers would liven up commencement proceedings. 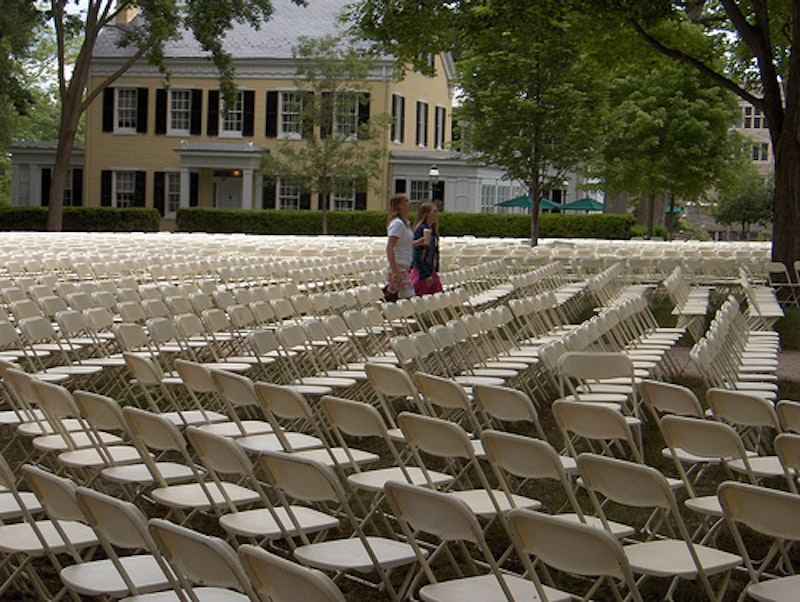 There was no way my lifelong friend Howie Nadjari and I would’ve imagined, as we used the album cover of Patti Smith’s extraordinary debut Horses in 1975 to separate bud from stem, that one day, far in the future world of 2010, this woman, a cocky apostle of Rimbaud and Dylan, and best friend of iconic photographer Robert Mapplethorpe, would give the commencement speech for the Pratt Institute at Radio City Music Hall. It’d be preposterous: first, she’d have to survive, not so easy given the Russian-like lifespan of pop stars; second, her career would need some breadth; and third, that kind of person, let alone rock‘n’roller, just wasn’t the normal keynote speaker at a college graduation.

I was much less surprised, recently, to find out that Smith actually did do the honors for Pratt on May 17, upon reading Lizzie Widdicombe’s “Talk of the Town” short in The New Yorker, for the 63-year-old singer has attained, by dint of longevity and a rather compelling life story, the status of a revered senior citizen. Fine by me: though I haven’t really cottoned to Smith’s recent work (in all mediums), her releases in the 70s, including the explosive “Because the Night,” co-written with Bruce Springsteen and the outstanding Radio Ethiopia makes her a worthy candidate for such recognition at any university in the country.

The mid-70s are generally denigrated as a fallow period for pop music, not entirely unjustified—though acts like Bowie, Roxy Music, Steely Dan and Television were among the exceptions—but when Horses came out of nowhere it was a beacon of hope that a new generation was taking over. Sure, groups like the Eagles and soft-pop, sensitive songwriters such as James Taylor and Carole King ruled the charts, but the first time I listened to Smith spit out the lyrics to “Kimberly” from Horses, it was jolting: “Oh baby, I remember when you were born/It was dawn and the storm settled in my belly/And I rolled in the grass and I spit out the gas/And I lit a match and the void went flash/And the sky split and the planets hit/Balls of jade dropped and existence stopped, stopped, stop, stop.” Not exactly “You’ve Got a Friend” or “Hotel California.”

The graduation ceremony, understandably significant to millions of proud parents and students every year, is not one of my favorite rites of passage. I skipped my own high school commencement, never attended any of those of my four brothers, and stood gamely through the middle-school graduations of my own sons, fidgeting and reading the print off the program to gauge when they’d be over. Yes, it was swell for my wife and me to see the boys, angelic (to us) in their blazers and ties, receive their certificates from the headmaster, but all the pomp and flowers and corny songs were really, at least in my opinion, over the top.

Back in 1978, I wasn’t planning on appearing at my graduation from Johns Hopkins (my original class had sweltered in the Baltimore sun a year earlier, but since I’d taken a semester off to work in Denver, I wasn’t on the normal four-year plan), but as it happened, not long before the date arrived a letter came saying I’d won a journalism award, and the show was on. That tickled my mom, so she and my oldest brother took a train down to Baltimore that day, and we promptly repaired to a fancy restaurant downtown, the now-departed Café des Artistes, and had a long liquid lunch, with crabcakes as an edible chaser, along with my friend Alan Hirsch, who was also my partner at our fledgling weekly newspaper City Paper.

After lunch, with time running short, my brother suggested buying a sixer of Schlitz for the road, and when I arrived at Hopkins, trying to find out the plans, Steven Muller, the school’s president, took one look at the three remaining cans of beer I held, shook his head, and then asked for one. He was mildly irritated that I hadn’t ordered a cap and gown in time for the ceremony, and quickly had someone from his office fetch the darn accoutrements. Muller, with whom I’d sparred (and joked) many times in the past during my tenure as editor of Hopkins’ News-Letter, was a really good guy, a lot of fun, particularly when his career was going well, which it was at the time. Despite a skirmish on campus in 1976, when Hopkins, observing its centennial, awarded an honorary degree to the Shah of Iran’s sister—I’ve no idea who vetted that selection, but even though the Shah’s downfall was three years away, the stirrings of revolution in Iran weren’t exactly a state secret—Muller was a highly-skilled administrator, and fund-raiser, and was supposedly on the short list for a post with the incoming Carter administration in early ’77.

Anyway, I baked on the stage for the next three hours, enduring with the rest of the audience an interminable keynote address by Admiral Hyman Rickover and then an equally long, and dull, speech from Ric Pfeffer, a far-left professor at Hopkins who’d later be denied tenure and, sadly, passed away at too young an age in 2002. I liked Ric, and knew him well enough to engage in political conversation when seeing him on the quad, but never took his popular course on Marx mostly because it required a ball-busting amount of work and I just didn’t have the time, or inclination, for such an endeavor. Making matters worse that afternoon in ’78, as I struggled not to nod off from the rum cocktails at lunch, was that I had to pee like a racehorse from almost the introductory remarks. Absolute torture. When the awards were announced, Muller mistakenly skipped over me, causing my mother to stand up in the audience with a glare on her face, thinking conspiracy, but his error was immediately rectified and he made a lame joke about the possibility of my writing about the graduation for the City Paper. That possibility wasn’t even on my radar, but I suppose he was ultimately proved correct, if 38 years after the fact.