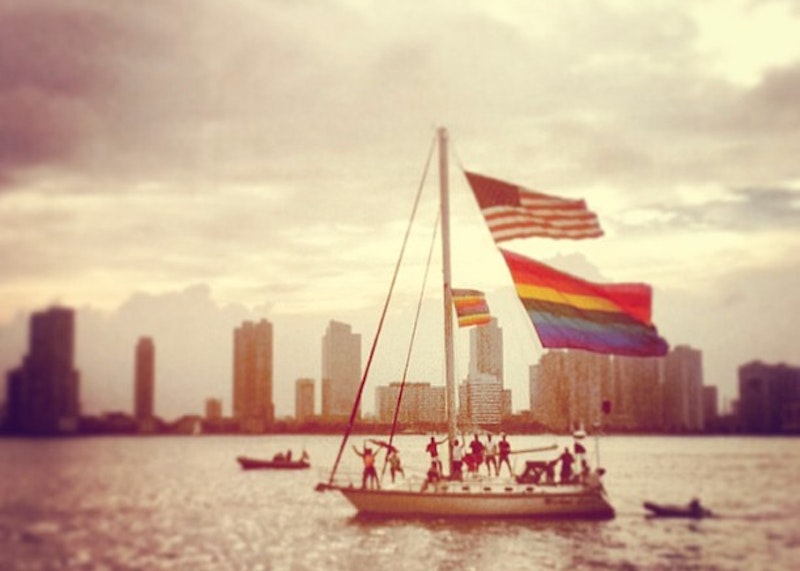 Gay marriage has passed nationally, Confederate flags are lowered, and trans people are playing leading roles on TV (fiercely!). The world has changed. The haters just have to decide when they’re going to accept it, live with it, and move forward. Those who cannot oblige can seek refuge by relocating abroad, but inclusion is spreading like crazy.

A major contribution to the current movement is the few celebrities who use their fame for good, sharing their platform with those who don’t have such a voice, and who challenge people to take action, think differently, and learn from listening to the stories of those facing adversity.

Caitlyn Jenner has been an interesting role model to watch. Have your doubts on her intentions, but she has done a swift and effective job of showing how powerful the fame monster can really be. Whether intentionally or not, she is holding other celebrities accountable for not doing the same. In just a few months, a B-list-reality TV star has risen to the occasion, choosing to tell her story publicly after 65 years of playing a role, both on and off camera. Shame on other celebs for self-destructing because of fame when they could’ve been changing the world, one living room at a time. Go Caitlyn!

It takes pure courage (not balls) to share your story. When you do it with intentions beyond your own benefit, i.e. in the hopes of creating tolerance, acceptance, and inclusivity, the courage is organic. There’s a movement happening where tolerance is taught through individuals, using whatever platform they have to share their personal stories of dealing with a struggle that many of us are unaware of.

Be honest, pre-Laverne Cox or Caitlyn Jenner, how many of you would’ve changed your views on the transgender community? You don’t turn the channel anymore when it's showing injustice done to drag queens, because you care a little more now that recent coverage has humanized the group and minimized the “them” factor. I bet you now know that there’s a difference and complexities between a drag queen and being transgender.

Those who are homophobic, close-minded, and racist will soon find themselves as the new “them.” Tolerance from listening to personal stories, allowing differences not to outweigh similarities, and realizing what goes on in your own home should be your only concern; it’s a better option for us all.

Take a look at recent blow-ups between private businesses and anti-discrimination laws clashing over baked goods for gay weddings. Cakes and cupcakes, people, really? Selling it to a gay couple for their wedding is not where we can start policing customers, let's just think on that. It would be like a Buddhist bakery refusing to sell buns to a meat-eater because they'll use them for hamburgers... #ridiculous. You are a business, your main purpose is to produce revenue, take your coins from paying customers (send a high school worker to drop off the damn cake), and keep it moving! The amazing support on social media for the plaintiffs and the critics of the discriminatory actions of these business owners is proving the LGBTQ community is supported from the outside!

As a gay black male from a lower social economic background, I’m finally reaching towards being proud of this country. The key word is reaching. There are still many strides to make, but there’s something to be said for how far we have come. You know you are living when the change that has already happened is the one that you used to think was for your kids, but not yourself. Don’t stop now America; give freedom to the next Laverne and Cait. They’re waiting.