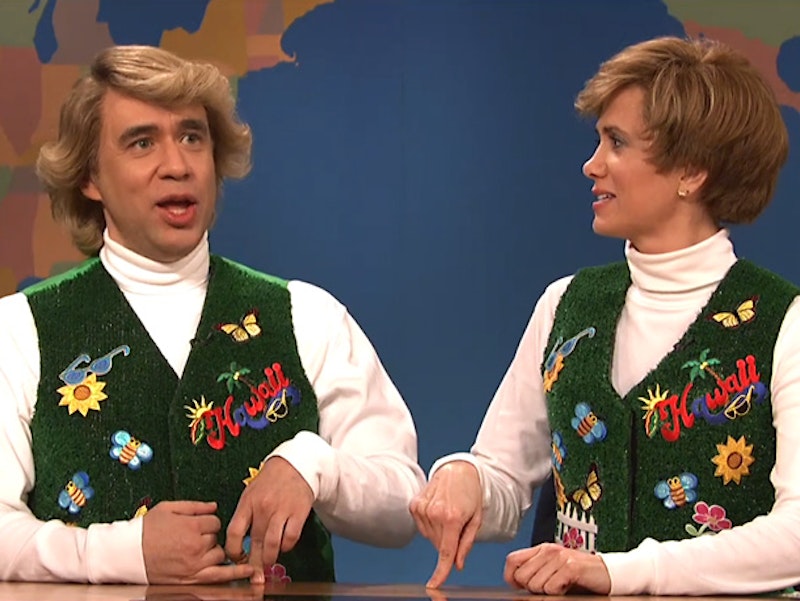 By necessity, being a student means that sometimes you're full of shit. It's pretty much inevitable. That paper you thought was due two weeks from now? Nah, due tomorrow. That history final exam that you were totally sure was centered on 1970s France? Sorry, brah, theme's gonna be ancient Greece. Didn't Dr. Gonzalez give us the weekend off? Uh-uh, you needed to read Bertrand Russell's The Problems of Philosophy and show up willing and able to debate its merits and failings. Everybody's been caught flat-footed that way at least once, but for some, flaming out academically becomes a way of life, an iffy bragging right that ultimately evolves into a habit or addiction, a sort of "How far can I push my luck without landing in jail or homeless or getting my jaw broken in a Cheesecake Factory?" kind of thing.

Meet Garth & Kat. As portrayed by Saturday Night Live's Fred Armisen and Kristen Wiig on the show's "Weekend Update" segments, they are an A Mighty Wind-esque a cappella duo: perfect 80s hair, ever-present white turtlenecks, matching seasonally-appropriate vests, overbearing glee-club brio. The duo's chummy repartee with anchor Seth Meyers suggests that they encounter each other socially, perhaps at dinner parties or a Central Park theater events or wherever upwardly mobile New Yorkers mingle, and that Garth & Kat successfully convince Meyers that they're siting on some happening material. Each segment is set up on the following supposition: Garth & Kat tried to bullshit their way through the segment previous with sloppy, off-the-cuff improv, but this time they've got their act together and it's going to be magical, the bomb, a once-in-a-lifetime event. (The implication: Meyers only bumps into Garth & Kat when he's perilously drunk or high.) Then they pull a boner, free-associating as fast as they can based on whatever fake song title they've pre-supposed upfront, desperately working off of and trying to finish one another's verses, until their con job collapses under the weight of massive incoherence, tone-deafness, and exchanged, "Can you believe we're getting away with this?" glances. Meyers begins to suspect that he's been had, Garth & Kat excrete a second glossalia-inspired abomination and are summarily dismissed.

The joke isn't that Meyers is getting played again and again by these charlatans, but that Garth & Kat put so much effort, repeatedly, into portraying themselves as fake singers in service of a tired gag that's got more holes in it than a colander. Their chagrined indignation when confronted with the eminent falsehood of their entire enterprise is delectable. One imagines them painstakingly designing or dictating designs to a tailor for those tacky, tacky vests, blowing hours teasing their hair into place, renting instruments they have no clue how to play for their return trip to the "Weekend Update" set, giggling themselves sick backstage and barely keeping it together under the hot lights. As a bit, "Garth & Kat" isn't replay-value funny the way "Update" staples like Stefon or Jean K. Jean or Girl You Wish You Hadn't Started A Conversation With At A Party can be, or the recurring Girlfriends skit; it's amusing the way Anchorman is amusing, the snort of hilarity erupting long after the program ends. Wiig's departure should keep it in mothballs, but in some perverse way I like the idea of Wiig and Armisen randomly resurrecting it from time to time as a good on middle-class privilege hijinx and good-natured gullibility.