Is Lady Gaga simply Dada, or is she after bigger game? 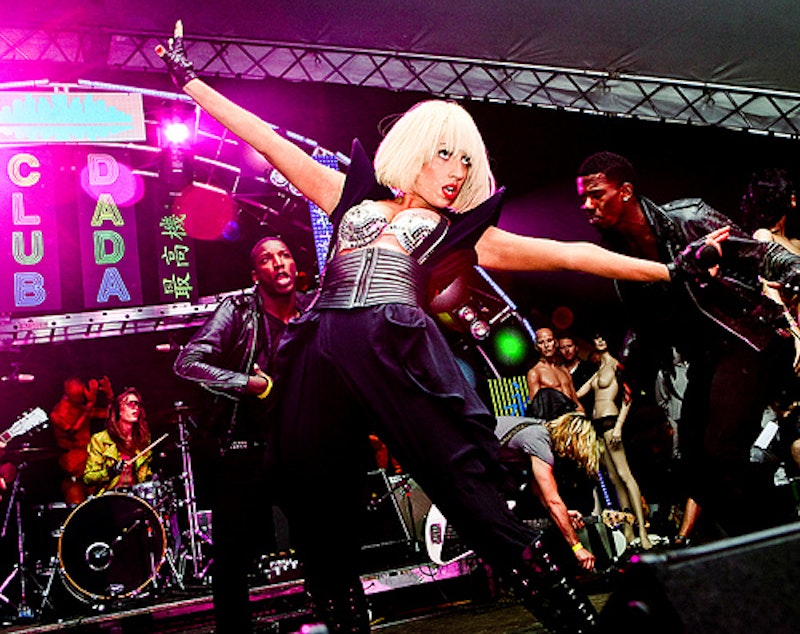 The pop-culture tsunami that is Stephani Germanotta continues apace, despite the increasingly vocal wishes of so many naysayers. But even with LaGa firmly established in the pop culture firmament, the question remains: Is there actually any there there?

Up until recently, Gaga has been content to build her career from disco dolly to world-conquering pop icon mostly through imagery; rarely did she make news for anything else.

But while the increasingly lavish music videos have been diverting, even the nonsensical epic “Telephone” can’t disguise the fact that LaGa’s yet to come up with a tune that anyone will be singing in the shower years from now. The obvious debt to Madonna—made all the more explicit in the clip for her “La Isla Bonita” remake “Alejandro”—is her most telling to date; after all, Madonna took a reedy voice, some rudimentary dancing talent and a willingness to provoke all the way to the bank for a good 25 years before finally, fully succumbing to self-parody.

But while both Gaga and Madge have posited that they’re in on the various jokes they’ve laid themselves open to, Ciccone had a couple of other weapons in her arsenal. A knack for memorable hooks (from the Cyndi Lauper-lite of “Material Girl” to the still-exhilarating “Ray of Light”) and a healthy interest in sex. Even with such painful missteps as the Sex book and the attendant, calculated partnering with everyone from Warren Beatty to Sandra Bernhard, there was no debate over whether Madge could express herself in the boudoir.

In recent weeks, Gaga’s been busting out, testing the waters as someone who actually exists outside the recording studio and arena. Unsurprisingly, it’s been to mixed effect: Flipping off persistent photographers at a Mets game (and earning a “What’s wrong with these kids today” scolding from the suddenly curmudgeonly Jerry Seinfeld for her troubles); getting banned (or not) from the Yankees’ clubhouse for either drunken shenanigans or daring to visit after the team lost; and now appearing in machine gun-bedecked bra and thong on the cover of Rolling Stone.

Although the expected gasps over the Rolling Stone cover have been quickly supplanted by the misadventures of Gen. McChrystal detailed in the same issue, there’s still plenty to consider in l’affaire LaGa.

The photo, of course, means nothing. It’s an update of Madonna’s conical bra from 1990, but the guns aren’t making any comment on war or gun control or anything else. And despite the bare ass, she doesn’t come off as sexy or intimidating.

In the article, headlined “Lady Gaga Tells All,” she declares that her third album is already in the bag—probably a good idea, as who knows how long this ride will last? Dipping a toe in political waters, she says: “Why are we still talking about 'Don't ask, don't tell'? It's like, what fucking year is it? It makes me crazy! And I have been for three years baking cakes—and now I'm going to bake a cake that has a bitter jelly. The message of the new music is now bitterer than it was before. Because the sweeter the cake, the more bitter the jelly can be."

To which I say: Um, all right. That “bitter jelly” had better have something substantial on its mind, lest LaGa find herself in her own private hell, better known as yesterday’s news. Will she voice her inner thoughts, a definable political stance, and an explanation of what makes the lady so gaga? Will she take the necessary steps to become a pop artist, with all that that conveys?

Or will she content herself with churning out the same pabulum and leaving it to the remixers to sort it out? If so, then the real money quote in the RS article is this: “When I wake up in the morning, I feel just like any other insecure 24-year-old girl. Then I say, 'Bitch, you're Lady Gaga, you get up and walk the walk today'.”