Perhaps New York really is everything to everyone with an idea, some determination and a few bucks (if that). 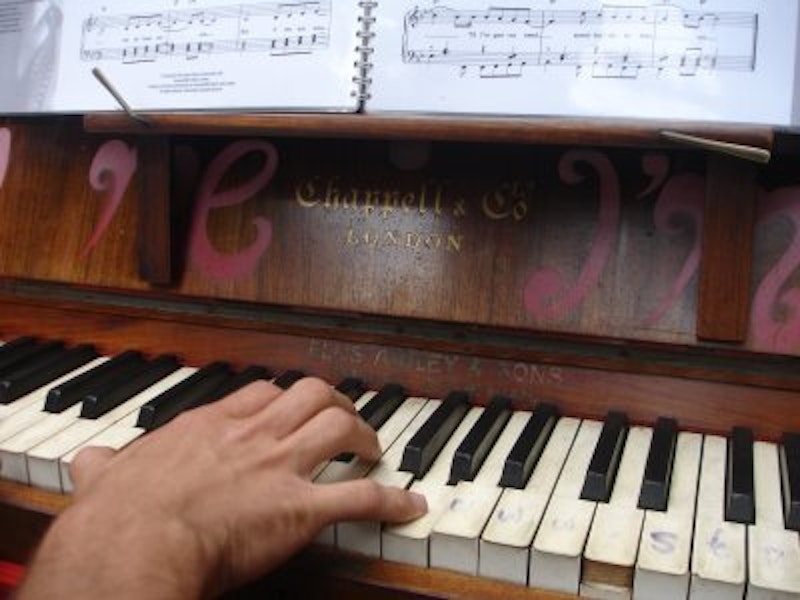 Not too long ago, the ubiquitous everyman conservative Conor Friedersdorf made some waves with an anti-New York rant—an intelligent and well-written rant—that pleaded to the reader at the end of the first paragraph: “Surely you can admit that [New York City’s] singularly prominent role on the national scene is a tremendously unhealthy pathology.”

Whether Friedersdorf is right or wrong doesn’t particularly concern me because I don’t think it matters: New York isn’t going anywhere and neither is its give-and-take with the wider country and world. His article spawned a discussion that took over the blogosphere for about a week, especially over at The Daily Dish where Andrew Sullivan posted videos and reader comments about all things New York. This simple video jumped out at me as perhaps as good a rebuttal as one could find:

Bhangra in the East Village from Derek Beres on Vimeo.

That’s New York, all melting pot all the time. The hip neighborhoods and steadfast institutions might feel overly cluttered or over-exposed or insular and aloof—doesn’t matter: the city is still a disheveled canvas with a massive box of paints and tools and instruments in front of it.

“All City—Nigel Hall and the NYC Street Pianos” is an ongoing project helmed by Guagua Productions, a three-man Baltimore-based video production team. The project builds on a global installation by Luke Jerram called “Play Me, I’m Yours.” Jerram set up some 167 upright pianos in eight cities around the world—60 of them in New York alone, and musician Nigel Hall is determined to play all of them in a week’s time. The project's title riffs on some old school New York graffiti parlance, and personally I think it's just short of impossible (granted, I'm the kind of guy who, when he visits New York, is still amazed by all the shawarma carts and taco trucks, and so I never make it anywhere on time).

Guagua is filming Hall’s journey as you read this (there will be a short documentary when all is said and done and sweated out), but they found some time to exchange emails with me and talk logistics, new media-based fundraising (hint: it works) and taking over the world.

Splice Today: Hold on a second. Graffiti and upright pianos? How did Nigel Hall make that connection? And is Luke Jerram involved in this project (other than being the reason behind the pianos)?

Trevor Martin: Well, it’s all rooted in the idea of public performance, self-promotion and the hunger that young artists have to rise to the top in one of the most energetic and exciting places on earth: New York City. In the early days of graffiti, to go "All City" meant to have your tag on every one of New York City's subway lines at the same time. It was the ultimate badge of honor: the only way to have everyone in New York City see your name, your artwork, and to leave your mark on all five boroughs. When we heard about Luke Jerram's "Play Me I'm Yours" installation, which would have 60 public pianos placed in every corner of the city, the idea came to us immediately that this was a perfect challenge for Nigel to try to get his name out there and give some amazing performances, as well as providing us with an opportunity to explore what it means to be a public performer, be it a graffiti artist or a pianist. How does the connection form between a performer and audience? And how is a performance affected by its surroundings? Luke Jerram is not involved in the project, aside from laying the groundwork for its inception. We'd love for him to check it out though!

ST: I imagine New York is teeming with interesting videographer-artist-musician-plant-mineral-animal teams, and this project feels full of that kind of vibe. Have you worked with artists—performance or otherwise—before? And aren't you going to have to do this under the radar because of NY's cultural licensing policies?

TM: This is our first time collaborating directly with a musician on a project like this. Nigel's a cool dude though, and so far everything's working out great. Sing for Hope, the organization running the installation has taken care of all the permits and permissions.

ST: Hauling ass around the boroughs is going to be your toughest logistical issue. Do you have a plan of attack? Your promo video mentions that you'll need a rental car. Does that mean the subway is out? As a producer, what's been the toughest shoot you've ever done, in terms of logistics?

TM: The plan of attack is to hit Manhattan first, tackling the Lower East Side and heading up Broadway on Day One. Manhattan should take three days total, and a day each, give or take, for the other boroughs. Check in at our blog for daily schedules, and on Twitter for progress reports throughout the day. The subway is very much in except for Staten Island where c'mon, let's be real.

Our feature-length doc Pelotero (peloterothemovie.com) about baseball in the Dominican Republic was often a logistical nightmare. No road maps or signs, a piece of shit 1993 Toyota Camry, spotty phone and internet service, routine 100 degree heat, and a culture that doesn't care too much for punctuality made for some interesting shooting days.

ST: Kickstarter is part of the growing trend of microlending. We see it with journalism, economic aid to foreign countries, political candidates and musicians. Is this your first time with Kickstarter? How effective do you think a site like Kickstarter is in finding funding for the arts? Whatever happened to being poor and starving and unappreciated? (Also, readers, check out these awesome crowd-sourced art projects.)

TM: This is my first experience on Kickstarter, although I've tried some other fundraising sites before. Kickstarter is really head and shoulders above the rest. Its interface is simple and straight forward, and it attracts funders who aren't just family and friends. Kickstarter is great at getting people who are already interested, but you still need to get people to your page before you can hook them. Half the battle is getting your link in front of as many eyes as possible. And the starving artist isn't gone; feel free to buy us lunch.

ST: There it is, Splice readers. Send these guys a few bucks; they're almost there. Anyway, videos of mass improv—especially set in New York—are pretty familiar to the Internet, now. Do you and your team have any points of reference, in terms of recent performances that went viral?

TM: Generally, there’s a set of rules that govern public space, and these videos succeed in introducing something unexpected that breaks those rules. Vincent Moon's takeaway shows are a great point of reference for that.

ST: Oh, yes. We're pretty obsessed with all things Blogotheque. Your project treats the upright piano as monolithic and authoritarian. How can you support such a narrow experience of music? More importantly, will the public be hearing any Joplin rags?

TM: New York City is about to be under siege with amateur renditions of chopsticks, “The Entertainer,” and other vestiges of long past piano lessons. Nigel's going to be playing everything from jazz standards to ragtime, pop, and original music. He might even take some requests if you come out and see us.

ST: I imagine you've been to New York a good number of times. Does the city still surprise you?

TM: Last time I was in New York a guy with holographic eyeball glasses told me I should buy in bulk now and mark the prices up come Halloween. Which, come to think of it, is not a bad business idea. It's a big city, and you never what’s lurking around the corner. What I'm really excited about is getting to visit some parts of the city I've never been to before. Staten Island, here I come.

ST: And, as always in a culture of short attention spans, what's next on your schedule?

TM: Worldwide takeover! Until then, we've got a new website debuting soon, www.guaguaproductions.com, where you can see all the amazing things we do.