Five News Stories That Will Make You Believe in Zombies

Florida in particular is full of scary flesh-eating tales. 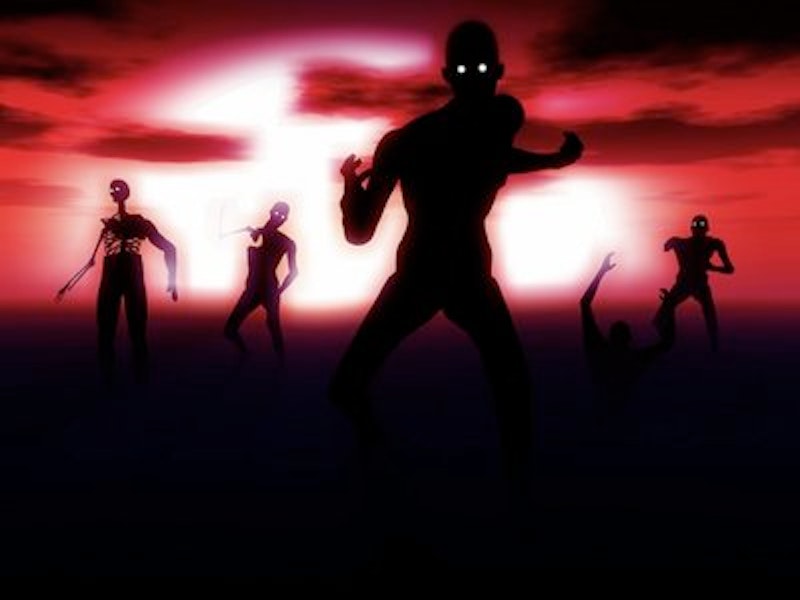 Maybe I’m a little zombie-sensitive, but it seems like everywhere I look, there’s another story about how we are one airborne virus away from total zompoc—a real live zombie apocalypse. Did you know Huffington Post actually has an entire news page dedicated to the Zombie Apocalypse?

It All Started When That Dude Ate the Homeless Guy’s Face: Most people were able to go about their business thinking zombies were fictional characters until this naked guy savagely ate the face of a homeless guy in Miami. A witness reported that the perpetrator, who was shot by police, “just stood up, with pieces of flesh in his mouth and growled.”

Bath Salts Will Make You Eat People: Another story out of Louisiana involved a guy eating another guy’s face. Bath salts were blamed in this case and it’s alleged that the Miami case may also have involved the dangerous chemicals. Chemically induced flesh-eating people can kill people, so just when we are thinking it’s going to come from a contaminated fish or germy airport—remember it can come from that crackhead down the street who got a bad mix of shit.

Flesh-Eating Zombie Crocodile Rock Drug: There’s a drug called Krokodil, a cheap heroin knock-off that causes skin rotting and green scaling, and it’s spreading in popularity across the U.S. The drug originated in Russia, where over one million people are addicted—and dying from their flesh falling off. Paint thinner, lighter fluid and gasoline are some of the ingredients of the drug that costs only 1/3 of what heroin costs addicts. “It’s a zombie drug,” Abhin Singla, M.D., said to CNN; he treated five patients in Illinois. “I mean it literally kills you from the inside out. If you want a way to die, this is the way to die.”

Or Is It in the Water?: This news story from Florida involves a heart-wrenching tale of boy who was knee-boarding and contracted a brain-eating amoeba that killed him just three weeks later. Apparently the amoeba lives in fresh water and enters victims through the nose. Will there come a time when we’re afraid to let our children in the water for recreation?

Oh My God, Not Crab Zombies: This one hits close to home for Marylanders. A recent outbreak of flesh-eating bacteria has become a major concern for seafood lovers in Florida. According to USA Today, the 28th confirmed case and ninth confirmed death has occurred in the outbreak of the flesh-eating bacteria Vibrio vulnificus, which is similar to cholera. A 59-year-old man died after setting crab traps and getting a bite on his leg that resembled a bug bite; the wound spread fast enough to kill him by the next day. Eating a single oyster contaminated with the bacteria can kill. So far the flesh-eating bacteria stories are out of Florida; none have been reported in the Chesapeake Bay.

All these stories are scary and the majority of them took place in Florida, which makes me not want to visit Disneyworld anytime soon. But they also remind me of the Barry Levinson eco-thriller film “The Bay” and how close we frighteningly are to real live flesh-eating monsters.