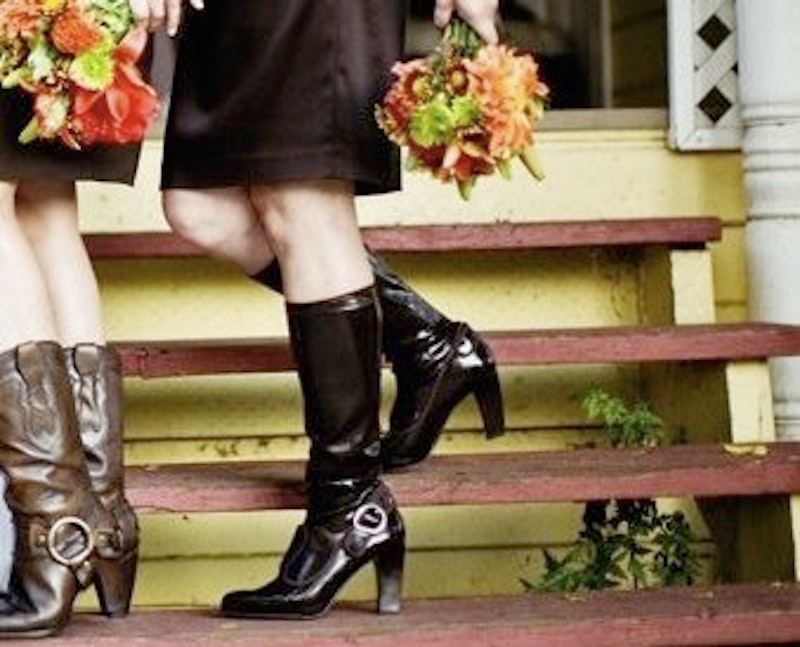 My sister got married last weekend. My other sister and I weren’t invited to be in the wedding. Though wearing a turquoise bridesmaid dress at the age of 44 wasn’t exactly something I missed, my feelings were admittedly hurt. I’ve never been a bridesmaid, which shows how many close friends I’ve had over the years. (I was Matron of Honor at my sister-in-law’s wedding). My sister and I haven’t exactly always gotten along—she was only in my 1991 wedding when my cousin couldn’t make it, and we actually came to blows over a Thanksgiving dinner one year while I had a toddler on my hip.

Remember the “These are the people in your neighborhood” song from Sesame Street? Here’s a little tour of the place I left when I turned 18 and didn’t return.

Without mentioning names or genders, this is a fact list about my family, the Irish-Catholic, six-kids, alcoholic dad apartment-complex raised crazy bunch we are. One of us has been on a “who’s the real father” type talk show, one on a reality police investigation show. Several have been strippers, possibly escorts. One ran away with a potato farmer in one of the states beginning with “I”; they met on the Internet. One used to be a chick but is now a dude. Several have been institutionalized for mental illness. One was in jail for attempted murder. Then there’s the usual stuff: booze, drugs, addiction, adultery, bankruptcy and divorce. You get the picture. Dysfunction junction. But you know what? I love every single one of them and can’t imagine a different family, how boring it would be.

My sister, who fits into the above paragraph as much as any of us, was set to marry a preacher/pastor/Jesus-type. I hadn’t even met him. If I could just make it through the no-booze, no-music, no-dancing reception without one of the extremely conservative church’s congregation trying to save my soul, I figured it would be a win. Someone had tried to save my soul at the bridal shower, and it hadn’t really worked so well. I’m still an unsaved sinner with no plans to allow a Lordy intervention, especially while wearing those fucking non-bridesmaid heels that were killing my feet.

I just wanted to make it to Philly, get a family photo of the six siblings to frame for my parents for Christmas, a picture of my own family of six, and make it out in time for my daughter’s marching band competition back in Maryland that same evening. I hoped for no drama. I took an 800mg Motrin for the headache I woke up with and didn’t want to progress to a migraine. I took an Ativan, which is the chill pill I take to sleep. Choose your poison. Thank God my dad stopped drinking years ago, so when he walked my sister down the aisle, they looked gorgeous and I gripped my mom’s elbow to keep her from melting into a full-on bawl. I even shed a few tears myself, which is impressive given my medication levels.

The ceremony was short. I can’t believe the Baptists still use the word “submission” in a non-50 Shades of Grey context, but hey, I had to make the priest take out “obey” at my own Catholic wedding in ’91. Weddings can be a little sexist. “Who gives this woman?” Really? What is she, a cow in a third world country? I walked down the aisle alone at my own wedding, since I hated the idea of being passed from the possession of one man to another. We did a “Who gives this couple in marriage?” “(All four parents: “We do”) thing. I was being annoyingly overly-feminist in not letting my dad walk me down the aisle, and have always regretted it. I didn’t mean for it to hurt his feelings, we danced to “Daddy’s Little Girl” (which isn’t much less creepily possessive anyway) but if I could go back, I’d make a different choice.

No drama; my sister looked beautiful as any happy bride does on her special day. We got a picture of the eight of us: my mom and dad, me and my five younger siblings. We joke with dad that we need to get these pictures when we can because we never know when we’re going to need them for the top of his coffin. In a dysfunctional family, we learn to laugh at a lot of things because who the hell wants to cry all the time?