Is point-by-point journaling taking the place of well-formed journalism? 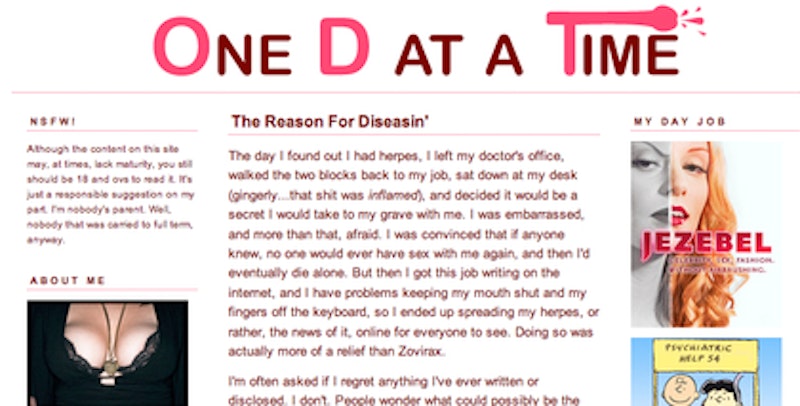 I had a writing professor in college who repeatedly emphasized the importance of balanced character development. Reveal too little, she explained, and you discourage a reader from caring about your character and your story. But reveal too much, and your character loses all human authenticity and is reduced to little more than a mere exhibitionist. It was good advice. The most successfully crafted and affecting characters in literature are most often meticulously developed. Human behavior is rich and varied, difficult to pare down, examine and authentically recreate in writing. There are constants, though, commonalities that guide human interaction and everyday life. For example, a separation of the public and the private, two spheres that remain mostly distinct within one life, but cross in the middle like a Venn Diagram. Only certain interactions and relationships can merge these two spheres, and when you are developing a character it is important to determine how he or she will navigate each one, and who will be permitted access to both.

But even this once seemingly universal human quality has drastically changed and diminished. In an age where even your grandmother probably has her own blog, anyone can be a writer and the distinction between public and private information has all but disappeared. Private thoughts and experiences—once reserved for personal journals that were hidden from prying eyes—make up the majority of blog content. The subject matter remains personal, but the medium is increasingly public. I once read a blog post in which a girl described her self-mutilation in gruesome detail, photos included; in another, a man cataloged a series of discussions with his wife that led up to his vasectomy. There are laws and regulations in place to protect personal medical and mental health information from entering the public discourse, but they are basically rendered pointless when patients willingly divulge everything from post-vasectomy testicular swelling to verbal exchanges that occurred in the confines of a therapist’s office to an Internet audience of millions.

It is a bizarre inclination to openly disclose the kind of information that most people only share with significant others, close friends and family, or trained professionals—and even among such trusted confidants, many people still prefer self-reflection to self-disclosure. The number of sex bloggers particularly perplexes me: there’s practically one blogger for every two sexually active women. While it’s wonderful that women are increasingly open and confident about their sexuality, the sheer volume of bloggers, teamed with the sometimes outrageously explicit nature of their content, can be a bit mind-boggling. From detailed descriptions of first-time anal sex to stories about unexpected menstruation, vomiting mid-fellatio and even pictures of bloggers with semen-covered faces, sex blogs often read more like pornography than personal narrative. But these aren’t pornographic sites. Stories of sexual escapades are mixed in with mundane descriptions of work life, searching for a new apartment, adopting a kitten. They’re almost like daily updates for close relatives, but instead of “I got a promotion,” it’s “I got rammed from behind.” There’s nothing especially unique about the quality or frequency of the described sex either. Lots of people have multiple partners, try different positions and even contract STDs.

Writing about personal experiences or hardships isn’t a new phenomenon. Many authors admit to basing entire novels on their own life experiences. Modern poetry practically rests on writers exorcising personal demons. But in both these forms, while the private is similarly made public, personal experience is also interpreted and analyzed. A poet examines his or her own experience and creates from it something new, something that explores the personal in a more deeply introspective and engaging way. Even memoirs, which are entirely based on one’s own life, require a certain kind of character development. A story, even a true story, must connect events in a meaningful way and reveal something about the life it details that encourages reader interaction. Too often these overly personal blog posts simply tell readers what took place, with no engagement from the writer, no interpretation of her experience, no analysis of why anyone should care. They don’t explore the writer’s life with any real depth or insight. Furthermore, they too often lack the creative flow and subtlety of true storytelling and come nowhere near the delicate, emotive accomplishments of poetry. These blog writers simply say: here is what I did and there’s nothing more to say about it.

You could argue that personal blogging is just a different form of writing, not subject to the same criteria and critique as more traditional literature. But as new mediums bring new writers, what we expect and accept from writing seems to be dwindling and converging into one preferred style centered on unabashed truth. The more outrageous and forthright you are, the more likely you are to secure a book deal. Fiction writers try to market themselves as memoirists. Any story with a female protagonist runs the risk of being marketed as Chick-Lit, pink cover and all. Writing has moved further and further away from a patient, dedicated craft toward an increasing desire to simply create what sells. It’s almost like literary prostitution: you offer up the most intimate details of your life to guarantee a big paycheck and if you’re lucky, the movie version of your life is quick to follow.

This is troubling for anyone interested in writing as an art form rather than a mere path to self-promotion. Blogging and self-revelation too often produce one-dimensional human characters, people defined by only one kind of behavior or personal quality—the kinds of characters young writers are taught to avoid. The growing emphasis on audacious truth has created a climate in which all forms of writing, even traditional fiction, are expected to reveal some intimate reality of the author’s life. Characters are viewed less as independent, imaginative creations and more as reflections of a writer’s personal secrets.

I recall from that same college writing class one student’s well-crafted story about a young girl who is sexually abused by a friend’s father. The description of the abuse and the character’s reaction was poignant and astute; it was an immensely successful first draft. When we work-shopped the piece in class a student asked, “So you were sexually abused as a kid?” The question was not only outrageously invasive in a class of 20-plus students, but also unintentionally belittled the writer’s ability to create characters from an intellectual and insightful engagement with the world rather than simply drawing from her own life experience. “This is not the place to discuss our childhood experiences,” my professor stepped in. “Can we please refocus our attention on the character’s development?”