Popular as they are abroad, Americans still don't care about soccer and techno. 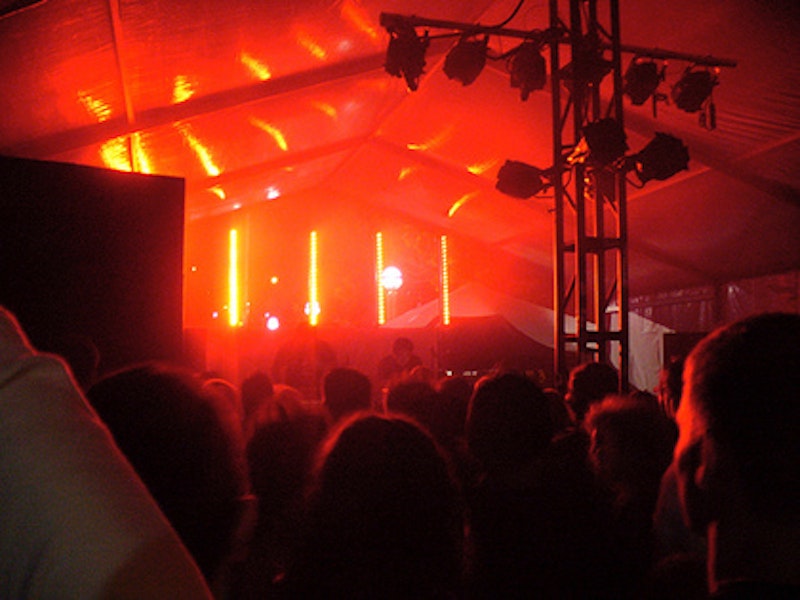 Yesterday in Beijing, the U.S. Olympic team suffered a disappointing finish against a team that they probably should have beat. No, I’m not referring to the heartbreaking loss in women’s gymnastics but rather soccer. Maybe you didn’t notice. Maybe you didn’t realize we had a pretty talented team with a decent shot of competing for a medal or should at least escape the group stages. Maybe you didn’t even realize soccer was in the Olympics.

There’s no need to recap the massive history of soccer—and its failure to take hold—in the United States. We’re just not a soccer country, never will be, and even though I am a fan of the sport, this is fine. I prefer American sports and see no real need to replace them.

Following soccer, though, is an odd exercise in American cultural maneuvering that gets a little bit old. By dint of my saying, “I like soccer,” a certain segment of society will instantly peg me as an America-hating, Europe-loving, effete intellectualist softie. My taste for American sports just barely keeps my American masculinity intact. The flip side of this is dealing with the small population of America-hating, Europe-loving, effete intellectualist softies that love soccer and expect me to join them in ridiculing American masculinity. I just like watching Cristiano Ronaldo play. Leave me alone.

The only downside to the nation’s lukewarm soccer embrace manifests itself in the quality of the professional game. Frankly, watching the M.L.S. sucks big time. There are only two things that I secretly wish the U.S. had that Europe does. One is high-end professional soccer. The other? The other is the pop culture equivalent to soccer. Something you think you know about, but probably don’t. Something you judge, even if you don’t really care about it. Something you may find opaquely European and metropolitan. We’re talking, of course, about techno music.

Techno is a bit like the Democratic Party. It’s concentrated in urban centers, especially larger and more progressive ones. Techno fans tend to be surprised by the existence of people who hate techno. A slight air of superiority exists among techno. People who don’t like techno think it is elitist and out of touch with the American people. And, to top it all off, it’s way more popular abroad.

Indie-types, folkies, punk rockers, and those that make up the majority of progressive music scenes view techno as bourgeois elitism empty of content. The bullied nerds of underground music movements have always been skeptical of the athletic, dancing-skills-sort-of-required aesthetic of techno. Likewise, soccer is still a sport and represents Sports to the progressives: the distractive activities quietly stultifying The People’s interest in real-world politics. At the very basest level, sports empowered the jocks and hegemonic middle-class culture that progressives view as a threat.

Things are changing. Quietly, the two have begun inching into American mainstream culture, slowly slicing out a niche, and moving forward step by step. U.S. television ratings for soccer are up. French house music stars Daft Punk were sampled in Kanye West’s über-hit “Stronger,” leading a bevy of hip-hop/pop-music-centric clubs to add the sampled “Harder, Better, Faster, Stronger” to their repertoire. Not to mention the fact that the international superstar DJs—Tiesto, Armin van Buuren, Paul Oakenfold, Daft Punk—sell out virtually all of their U.S. appearances.

Pele came to America in the 1970s and showed us soccer. Yes, soccer had been here since its inception, but only then did we see what it should really look like. Now, with increasing globalization, we can watch soccer at its highest level all the time. Americans respect and crave high quality and achievement. We know the MLS is watered down, and now we get to see why the rest of the world likes soccer so much.

Although there is no singular figure, I would argue that techno’s Pele came in the form of the Internet combined with Daft Punk. The Internet is obvious, it allows people to find music all over the world, as well as find tickets for the international stars’ U.S. tours. Daft Punk did a lot more than you think. Their “One More Time” video—actually a lifted montage from a feature-length anime film set to their album Discovery—is the only techno or house video I can recall seeing on heavy mainstream MTV rotation during my lifetime. Add Kanye and the increased familiarity of their music through extensive use in commercials and TV shows, and bam, everyone knows Daft Punk.

Techno and soccer will never reach the lofty status they hold abroad. The U.S. culture scene is too crowded and diluted as it is. If you want to dance, you don’t need techno, we have homegrown hip hop. We have football, which is the best sport ever. We need things to be ours because we consider ourselves the most innovative and the special. We don’t want to be like the rest of the world. It doesn’t matter that both have early roots here—techno was actually invented in Detroit—they are not ours and never will be.

Globalization, while increasing the popularity of both, will also limit their ceilings in America. If I can get the best soccer from England, I want my American soccer player to go there so I can watch him play among the best. Unfortunately, the best American DJs will have to prove themselves abroad, rising up against the best in the world, before being able to return home. Better American soccer and techno do not mean that I get more access to either.

If that is the case, we are right back we started. Nothing has changed. Just another export we don’t care about, almost like some car that Ford exclusively makes for Europe. But this has an unexpected upside. Think about some of the great international sports heroes and moments. The hysteria of the Spanish win at Euro 2008 is hard to match in American sports. Ricky Hatton inspires English fans to boo the American National Anthem in nationalist fervor. Sure, we’re all rooting for Michael Phelps, but did you really celebrate in the streets after each of his medals? I didn’t.

Imagine if an American soccer player was the biggest star in the world, at a sport we don’t necessarily care about but know everyone else does. Imagine going to another country, someone hearing your accent, and them speaking the player’s name to you. Or someone associating our country with someone like Oakenfold or Tiesto, whose forays into exotic locales are often those people’s only interaction with an English or Dutchman. You would love them. They would be a source of national pride much more than a LeBron James or a Beyonce. They would be our gift to the world, and we would care.