Sure, some people are in to this kind of thing, but Renaissance Faires can offer a pretty grim look at Ye Olde Dregs of Humanity. 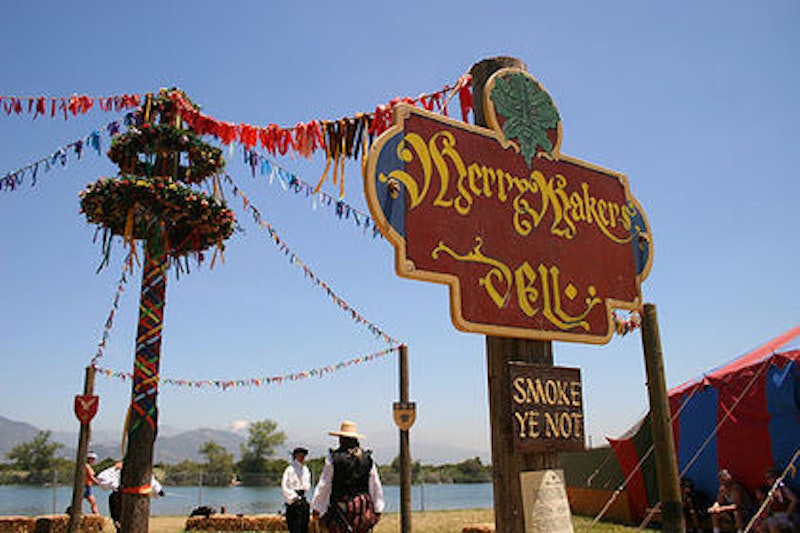 A few of my friends from college and I have developed a taste for Renaissance faires. Admittedly, the joy we derive from these faires is of the sour and ironic sort; there’s something tragic about the spectacle of three ageing pseudo-hipsters laughing up their sleeves at a pack of tubby guys flailing at one another with PVC swords. It’s as if God lost a bet with the devil about the essential goodness of human nature.

And how the soul of humanity shines through the renaissance faire! Last weekend the weather was cool and sunny and the Lakewood, NJ Lion’s Club had gathered a mighty host at Pine Park. Pavilions dotted the greensward; knights had assembled with their chargers and stout burghers had erected a surprising number of portable toilets. The townsfolk prepared festive foods under grimy tarps. We sampled the fried Oreos—they were chalky and took an unreasonably long time to prepare. My friend Diana suggested that this was because the food tents used authentic, pre-Taylorism work systems. Behind the counter a sad-eyed teenager dipped a pitcher into plastic tub filled with batter. He apologized tersely when Diana asked for lemonade. “We don’t have any cups,” he explained. This was early afternoon.

Our time in the line afforded us an ethnographic glimpse into the other fairegoers. Behind us a local couple argued over souvenirs. A combination of boredom and thrift drove the woman (who was young and overripe as a nectarine left in a locked automobile) to buy a peacock feather. “What the fuck is this?” her boyfriend asked. “It was the only thing I could afford,” she rejoined. Her boyfriend argued passionately that the vendors had rooked her; he felt that the feather contained insufficient ancillary plumage and that the central shaft was “not even thick.” While we waited for our Oreos the young woman returned and exchanged the feather no less than three times. Eventually the arrival of a silent man wearing a rubber dragon skull helmet distracted them.

The faire offered intentional entertainments in addition. We walked down a small hill to watch the archers at their targets; up the hill a young man ran free, indulging both his several facial tics and a loose-jointed gait seen only in those who bear no financial responsibilities. At the archers’ course, uniformed marksmen struck rubber rats from ten paces. A dreadlocked 14-year-old hurled ash spears with an atl-atl. I remarked that the atl-atl predated the medieval era by as many as 30,000 years—in the shadow of this nerdy correction I felt that I deserved at least hanging. Clouds passed over the sun; two girls photographed one another in their Hot Topic dresses. Someone fired a cannon and everyone jumped in unison. Across from the archers harquebusiers drilled with their heavy, smoking guns. Uniformed police, brawny and tall, strode past. The guns blew huge and perfect smoke rings.

We sat on the grass, toying with a colossal funnel cake. At other Ren-faires I have sampled enormous pickles sold from plastic chests cunningly concealed in oak barrels. I have seen, though never eaten, club-like turkey legs whose grease and bulk hark back to some fire-lit hunting lodge of the imagination. The Lakewood faire preferred the ostensibly modern delights of thick breading dusted with sugar; but what is more medieval than enjoying a grotesque meal while watching the jiggling back fat of an ersatz gypsy dancer? As we ate a young, sinewy man strolled by; he wore a saber at his waist and was dressed all in brown. He carried a ragged cardboard sign that said “I bet you $5 I can light your cigarette without a lighter or matches.” A woman asked him “are you the court jester?” She leaned on a stroller in which her child slept. The man replied, “Madam, I am a wandering warrior. I would never intrude on the court jester’s territory.” His spiel, we had seen earlier, relied on a plastic magnifying glass.

The harquebusiers cleaned and stored their guns and departed the field; a melee began, by turns, in their place. Two hefty men dressed as samurai struck one another with wooden swords and, in one case, a cane. An enormous skinhead in yellow and black check swung a rubber-padded sledgehammer. Periodically men would seize in place and then fall, miming death. No screams or gouts of blood, no ringing of metal on metal. One of the fighters was handsome and tall, square-jawed like a man in a US Marines recruiting poster; he walked arm in arm with a black-haired siren. “Some of these Ren-people are pretty hot,” my friend Kean commented. We were surprised.

At 4:30 we walked through a deserted tennis court to the jousting lists. The aluminum bleachers were filled with families facing the field, where a whip-thin woman with stringy blond hair carried bundles of lances to and fro. We sat near a booth that rented bows and arrows for target shooting; at any moment we could have been pierced like Saint Sebastian, and it would have been a mercy. The jousting MC, a portly man in plate mail riding an embarrassed-looking Percheron, spent forty-five minutes warming the crowd up. I do not exaggerate. He relied on nerd humor of the sort enjoyed by people who answer “or” questions with “yes.” This he spiced with casually delivered slurs against gays (“This isn’t ‘Bareback [sic] Jousting’!” he crowed after claiming that the opposing champions enjoyed long walks on the beach with one another) and skin-crawling, embarrassing invitations for audience participation. These mostly consisted of him ordering underage girls to gyrate for the audience; he was unrelenting and humorless. Possibly these qualities would have worked had he been a general, but they are little valued in comedians.

We stood with the sun in our eyes as the knight clutched his microphone and turned his steed back and forth before the audience. He brought the champions out; one was bald, one pony-tailed. One suffered silently under the MC’s inane banter, the other participated with the glee of an invert who has found himself through happenstance at the center of attention. “Hey guys,” Diana said, “Let’s ditch this and go to DSW shoe warehouse.” And lo, we did.