All those flocks you watched fly south? They're in my neighborhood now. 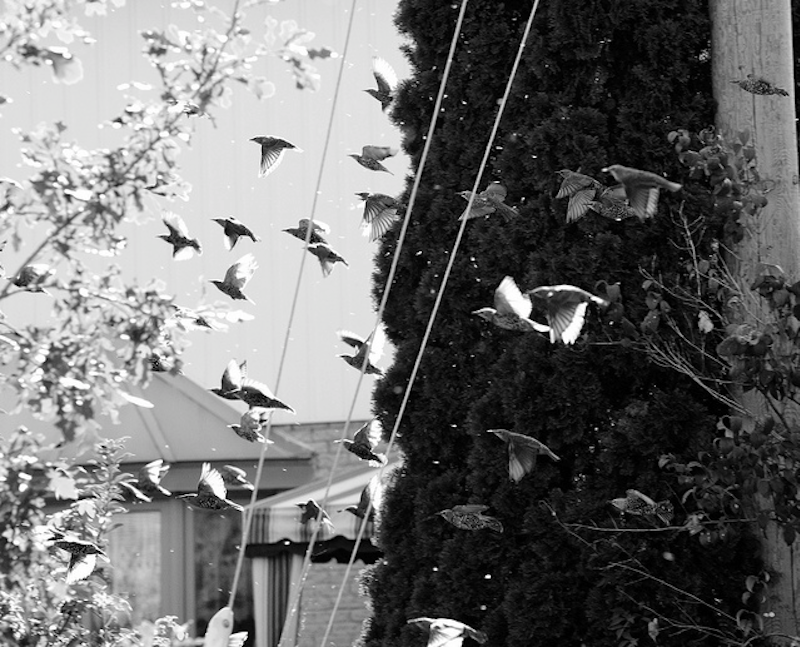 The golden arches. Telephone wires. Bank roofs. Man-made gullies. Undeveloped fields. Look there, and there, and here, and up, and over, and recoil inwardly as several hundred beady pairs of eyes gaze impassively back at and through you.

They are everywhere, a wintertime given down here in central Texas, these anonymous obsidian birds, these ruffians, these disheveled curs, rolling six or seven or 20 score deep, alighting briefly in loose clusters or throwing themselves in various formations through deceptively gray skies that will crack yellow like eggs once last evening’s pallor fades and the new day breaks.

There they are. Twitching, hopping, pecking at worms, at trash, at one another, crowding saplings that stagger beneath their massed weight. Then, there they go, somehow psychically and suddenly making the collective decision to evacuate, usually to a site several yards distant, where the cycle of neurotic, short-term loitering begins anew.

They won’t injure anyone, these birds, though any number of high-end automotive paint jobs will likely be compromised, but it’s impossible to watch these flocks without feeling a ghost of a chill, because, well, if a gang of 200 birds wanted to badger, cajole, or eat you, what could you do about it? Even assuming that you could retreat to the safety of a windowless compound from which you could somehow—perhaps via surreptitiously placed video surveillance equipment—monitor the birds and their proximity to the entrances and exits, eventually you’d need to leave that compound for one reason or another, and it isn’t like the birds, if they unmoored themselves from the rigors of herd instinct, couldn’t wait you out, you know?

They could, couldn’t they? And when they’re huddled across the street on the eaves of a Dunkin’ Donuts watching you warily watch them, it’s hard to escape the sense that maybe they’re taking your measure. Sizing you up. Hiveminding plans. Waiting for their chance.