Understanding Irina Werning's "Back to the Future." 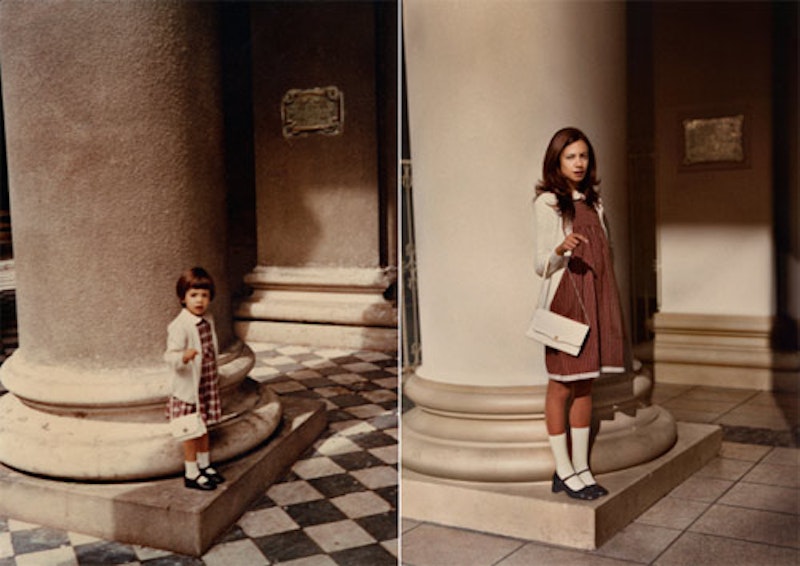 "I love old photos," begins Irina Werning's artist statement, and I love her new ones. This collision of time, it seems, is exactly what this Argentine photographer's "Back to the Future" series investigates with such deft grace, empathy for its subject, and the perfect dose of facetious playfulness. The results—almost identical replications of photographs whose subjects, having aged more than decades, are placed in meticulously recreated environments—are uncanny, intimate, rather provocative, and a complete joy to look at.

We can assume Werning knows her subjects personally, maybe even the closest of friends, and returning to the site or location (bedrooms, kitchens, yards) of the original photos is not necessarily impressive; what is exceptionally impressive, I would say brilliant, is Werning's ability to recapture and mimic the particular/peculiar tone of each photo, negotiating and manipulating the formal variables such as the lens, film exposure and lighting. Anyone who's taken a photo with aesthetic intentions knows how difficult it is to get desired effects. It is one thing for a photo to look old because it is. It is another thing, an inspired act, to make a new photo seem embedded in the past.

The power in the photos lay in their subtle mimesis: the exact composition; the exact path of each shadow, the same time of day, and the same accompanying objects. Some of these objects, presumably personal items, have simply been employed the second time around. What I find most endearing though, is when a tie, hat, or shirt is obviously not the original—pointing to a sort of earnest nostalgic hunt for the past, not to mention a logistical feat in itself.

Let us not forget the stunning performances on the part of the subjects. Their expressions, with the help of Werning's flourishes, seem to instantly collapse time—as if it were merely some annoying thing trying and failing to block the spirit from its eternal youth. Look at each face. If time is a mask of wrinkles, the eyes shine through.

Before digital cameras (and especially before the Internet), the photograph was sacred, a dedication to a particular moment in time. One had to buy film, take the picture, develop the film, pick up the photos, and stick them in a photo album. With our current ethos of camera phones, Facebook albums, and endless server space, each photo means a little less and less—and this has a subconscious effect on our expressions. We all look a little uncommitted, disengaged, and detached from the experience, sitting there knowing there's a good chance the digital file will be erased before it's even uploaded.

The sheen of the 1970s and 80s, from which Werning's aesthetic borrows, locks our subjects in place forever. It’s hard not to fall in love with each moment, the "ephemeral unimportance" by which their very preciousness is measured. It is as if we become family members, seeing wonder in the small incidental moments of our sons and daughters. Time may be a cruelly neutral thing, obstinately clicking towards an infinite end. Humans however, are born to fight, to push back time with soft hands towards a past which may still hurt, bravely, lovingly. People get taller, maybe even broken. But a person will always be that person, and that’s beautiful.