Confrontational artists and thinkers face the intellectual and actual loneliness of being the permanent opposition. 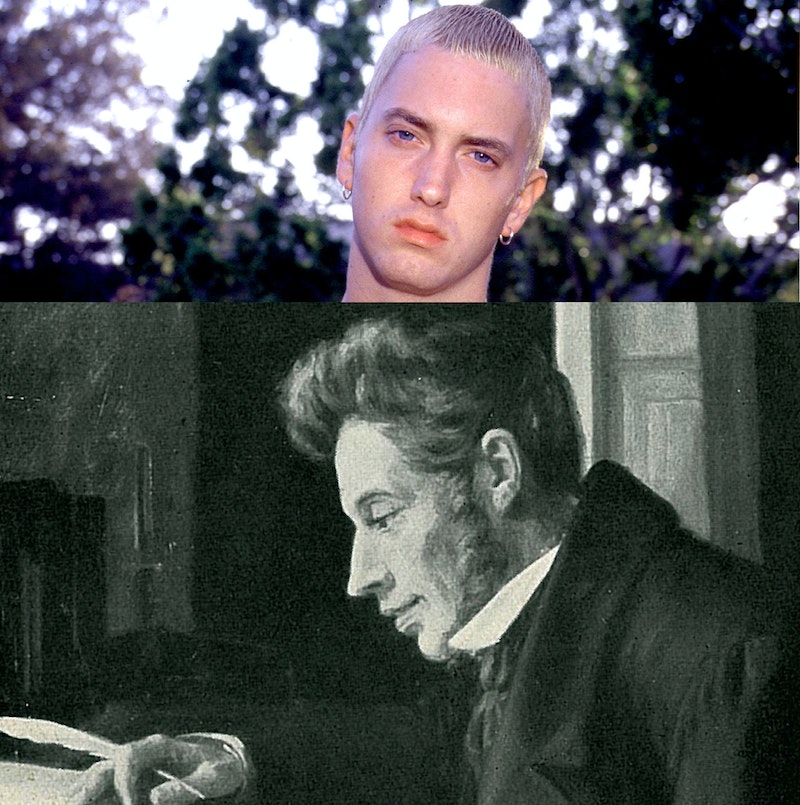 I remember as a teenager realizing that just because a singer uses the pronoun “I” in a song doesn’t mean that the song is biographically true. Songwriters are often storytellers, merely using the first-person perspective as an effective device. This was revelatory. But some musicians and authors have used a kindred style for ulterior purposes, not just to tell a good story but to instigate. In light of this, I see a parallel between rapper Eminem and philosopher Søren Kierkegaard.

Kierkegaard: “What matters is to find a purpose, to see what it really is that God wills that I shall do; the crucial thing is to find a truth which is truth for me, to find the idea for which I am willing to live and die.”

Both of their lives began with tragedy or hardship, but they became prolific writers: one of lyrics and the other of books. Kierkegaard tried to find a truth for him, and Eminem claims that it’s just him. They tried to figure out how to live their lives and to make decisions accordingly, and largely in the public eye. Most authors who’ve famously written under pseudonyms were trying to disguise their identity. But, for Kierkegaard and Eminem, anonymity was clearly not their intent in using alter egos. They used pseudonyms to express ideas and thoughts that they might not actually endorse.

Kierkegaard tells us that he was always a religious author, but to dismantle the illusion created by the church of Christendom, he had to speak to them indirectly. A direct confrontation, thought Kierkegaard, wouldn’t work because people need to uncover the illusion for themselves. He donned the pseudonyms of his aesthetic authors to push people to make judgments. Isn’t this dishonest? Perhaps, but Kierkegaard is fine with that as he boldly claimed that one can deceive others for the truth’s sake. He worked through the pseudonyms for the true version of the cause that he attacked.

In the 1990s, Eminem did something similarly bellicose, though not for the same reasons. After his first album didn’t do very well, he developed his alter ego Slim Shady, who spoke in ways that were more extreme and disturbing. People regularly mistook these new harsher lyrics for what Eminem believes about the world, but this alter ego launched him into stardom, as he undermined the same industry in which he was trying to gain acceptance. Eminem confronts people through his alter ego to the point where the masses have to make a judgment, which was also one of Kierkegaard’s explicit goals.

Eminem raps, “God sent me to piss the world off.” As a professed atheist, Eminem isn’t being literal about God, but Kierkegaard may have believed that God was the origin of his mission. As Kierkegaard was influenced by Socrates in Athens, he became an intentional gadfly to the people of Copenhagen, especially the religious leaders of his day.

About Kierkegaard, James Collins wrote: “All great historical figures—men who fill their age rather than merely move with the times—must make their first step one of opposition.” The alter egos of both allowed them to say things deemed unacceptable and start feuds with individuals and institutions. For Kierkegaard, different pseudonyms feuded with the church and some individuals, while Slim Shady became an outlet for Eminem’s anger and allowed him to explore darker themes, while also feuding with other rappers.

“The mass of men lead lives of quiet desperation,” said Thoreau. Undaunted, Kierkegaard and Eminem don’t fall into that mass. They’re confrontational, which is difficult and lonely, though they did it to themselves. However, does this opposition serve any kind of good purpose? Controversial art, ideas, and people can cause the masses to think, judge, feel, and act and react. We don’t have to necessarily respect the specific ways that each of these men cause controversy, but their influence on society runs deep. In an anodyne age where the message is continuously about not offending anyone—which in some ways is a good message—sometimes we need someone to give a swift kick in the ass to wake us up again and reexamine ourselves. It’s easy to fall in line and not stir things up; but if you want to leave you mark on the world, then sometimes you have to bite.

Michael Spicher is an educator and researcher in Boston and runs Aesthetics Research Lab, follow him on Twitter: @MRSpicher