In The Satanic Rites of Dracula, Bond wins, unfortunately. 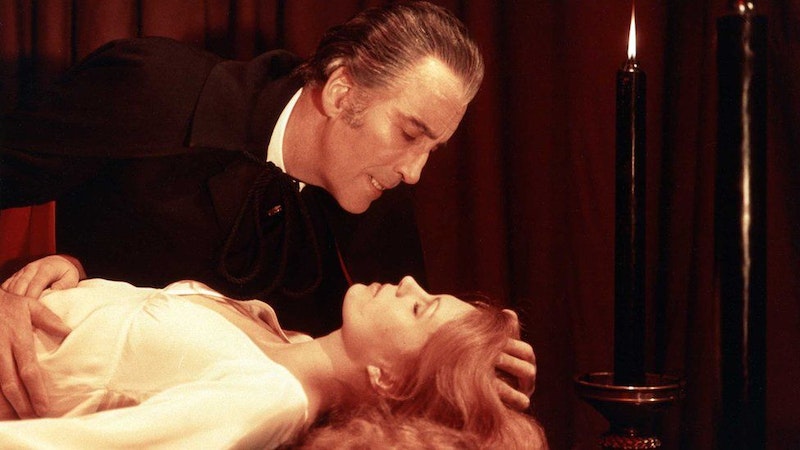 This is the eighth in a series of posts on the nine Hammer vampire films. The seventh post is here.

Spies and vampires—you'd think they could work together.

Invasion of the Body Snatchers points the way: Cold War paranoia is linked to vampiric conversion. To turn commie is to turn undead; the filthy foreign hordes are sneaking in their seed-pods to corrupt the upright Anglos. Spy and vampire films are built around terror of the infiltrating other violating the borders of propriety. So why not have a vampire spy? Ernst Blofeld, Prince of Darkness—that seems like a reasonable Hollywood pitch.

The creators of 1973's Hammer horror film The Satanic Rituals of Dracula saw the potential. The film presents the British secret service confronted with a vampire threat; the evil Dracula (Christopher Lee) has compromised some of the leading men of London with his filthy promises of sex and power.

Inevitably, the threat, early in the film, is embodied by one of those terrifyingly seductive foreigners, Chin Yang (Barbara Yu Ling), who slays a rooster and pours its blood on a nude young woman. The woman writhes in agony while white guy members of parliament and Nobel laureates look on in horror and barely concealed lust. Later an upstanding, efficient, spectacled Secret Service secretary (Valerie Van Ost) is captured, divested of her spectacles, and, much to her evident delight, claimed by Dracula in the usual biting-equals-sexual-ecstasy manner of the Hammer movies.

The flower of British manhood and womanhood, the very protectors of the boundaries of virtue, are infected with evil. Betrayal of country and betrayal of rigid bourgeois propriety are one and the same. Communism becomes, not an ideology, but a monstrous triumph of the id. Turn from loyalty to the crown, and fall at once into the foul, unhuman maw of Satanism.

Dracula systematically corrupting law enforcement personnel and turning hapless James Bond wannabes into skulking undead creatures of the night might’ve been an entertaining film. You can imagine the smooth, dashing, brutal British agent seducing the enemy spy—only to have her fangs come out when he thinks he's got her where he wants. Or maybe the grizzled department head very seriously chewing out his subordinate before rolling back his mustached lips to suck the blood of that same startled inferior. The whole Very Competent spy apparatus disappearing beneath an onslaught of eldritch undead filth would have a certain verve and metaphorical resonance. Spy films always like to suggest that we become the evil we fight. Vampires would underline that in a pleasantly vivid manner.

However, Satanic Rituals of Dracula doesn't have that much imagination or gumption. The secretary is the only Secret Service employee who turns to vampirism. Other spies get killed, but only in the normal way; by bullets, gunfire and torture. Dracula in the film isn't just a metaphor for enemy spies; he's actually created his own quasi-espionage network, staffed, rather improbably, by motorcycle hoodlums garbed in fuzzy winter vests.

And instead of corrupting England by feeding on its blood, Dracula's put together a more literal-minded Blofeld-esque plot; he plans to release a supercharged bubonic plague bacillus into London. Of course, if everyone dies on earth, Dracula won't have any blood to suck—which leads occultist and vampire hunter Van Helsing (Peter Cushing) to speculate that Dracula secretly yearns for death. Moral: put Dracula in the modern world, and some dope will try to psychoanalyze him.

The real extent of the film's timidity is encapsulated in a sequence where Chin Yang attempts to seduce and bite Inspector Murray (Michael Coles.) Normally, in a Hammer Dracula film, when a vampire goes to seduce you, you stay seduced. Dracula is sometimes interrupted before he can feed on the women he's swayed with those close-ups of his eyes, but nobody just throws off his influence. Everyone wants what Dracula offers—except for Inspector Murray. The vampire gets him in her hypnotic gaze, but he's just too dedicated to king and country and virtue to fall for her foreign charms. He realizes she's a vampire who's going to get him, overpowers her, and puts a stake through her heart.

Murray is a recurring character—he showed up in Dracula A.D. 1972 as well—and he's more or less fulfilling the role of main investigator/male protagonist in the film. Director Alan Gibson obviously sees him as one who needs to survive to the end. But this bland commitment to Hollywood spy tropes is exactly the problem. Rather than setting the vampires loose in the espionage drama and watching the chaos, the movie treats the vampires as normal spy danger, to be investigated and eventually overcome by the guardians of British normalcy. Murray resists the vile inducements of the enemy; he bravely beats the snot out of a motorcycle hoodlum to swoop in and rescue Jessica Van Helsing (Joanna Lumley) at the last minute and prevent the bubonic plague from spreading. He checks off all the heroic spy boxes, giving Van Helsing the chance to kill Dracula, the way he always does.

The Satanic Rites of Dracula is the worst Hammer film I've seen so far. But its inferiority isn't so much a betrayal of the franchises strengths as it is an extension of its weaknesses. In The Invasion of the Body Snatchers, or in something like Steven King's Salem's Lot, the encroaching forces of corruption are a real threat. The non-human corrupters triumph, or come close to triumphing. There's a gleeful, terrifying conviction that civilization is just a thin façade of hypocrisy, which will crumble into filth and debasement with just a slight push—or bite.

The Hammer Dracula films are never willing to go that far. A weak woman or two may be seduced to the dark side, but order—and boring order at that—always wins without much fear that it wouldn't. The status quo is cool, and will keep most of us safe in most circumstances. James Bond is defending us, and he's not a vampire at all, not even a little bit. Only the evil people out there are evil. That philosophy has many downsides: one is it makes poor horror.