Curren$y is Making a Record Titled Weekend At Burnie's

Think about that. Now overthink it. 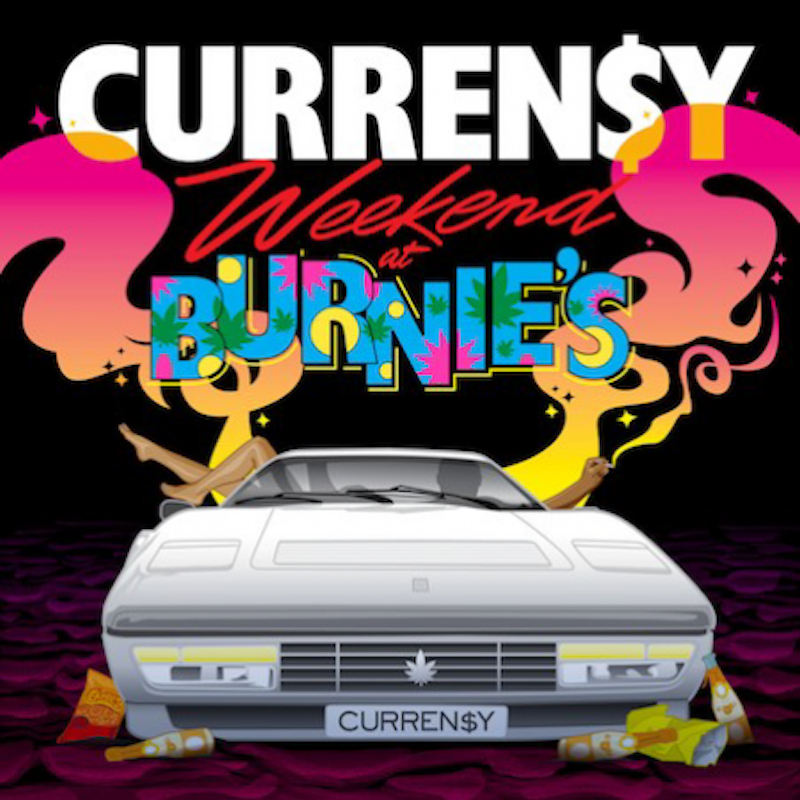 Weekend at Bernie’s, if you’ll recall, was a dark comedy about two dudes partying in their dead, crooked boss’ home for a weekend while pretending that the boss was drunk, unconscious, or comatose and improbably fooling pretty much everybody around. This conceit would’ve come across as unconscionable had it been filmed and released anytime outside of the oddly permissive 1980s cinematic bubble, an era where “madcap” was the watchword. It spawned a sequel and helped the acting careers of Andrew McCarthy and Jonathan Silverman, who remain hugely, internationally famous, command disgusting paydays, and are partying on yachts named after Preakness-winning stallions as I type this. So it was only a matter of time until a rapper ripped off the conceit for a “street album” issued by “Warner Brothers”—the scare quotes are intended to indicate that the significance and nature of each concept is in flux or outright nebulous at this point—and why not Curren$y, one of a dozen semi-major ganja-celebrating MCs vying to be the new Snoop Dogg? The subtle titular shift suggests that Weekend at Burnie’s will be about what every other Curren$y album is about: getting blazed, but perhaps spending the weekend getting blazed at the home of someone named Burnie.

(If you’re a stoner whose stash has a habit of disappearing unaccountably, you want to be tight with dudes who nickname themselves Burnie.)

Obviously, Curren$y and his management must commission a straight-to-DVD Weekend At Burnie’s movie. In most respects, the film would remain faithful to the Ted Kotcheff original: corporate stiffs work for weekend, corporate stiffs discover weird accounting error, corporate stiffs report error to evil boss and are duly invited to party down at evil boss’ beach house, boss gets clipped and hijinks ensue. Now, as I’m conceiving this, Weekend at Burnie’s would venture into more risqué territory, a sort of psychosomatic cannibalistic waster’s no-man’s land where our protagonists—Curren$y and Wiz Khalifa, with a duplicitous Chris Tucker playing Terry Kiser to their McCarthy and Silverman—inadvertently discover that curing, baking, and smoking bits of Burnie’s corpse via a complicated, guard shack-sized bong results in an unbelievably intense, crack-binge high.

You might expect a movie like this to sidestep the inherent moral quandaries inherent, and this movie would not disappoint, but on the other hand, it would also sidestep the Terry-Gilliam-directing-Fear and Loathing in Las Vegas lens fuckery that made the viewer believe that someone slipped a ‘lude in his Diet Coke, instead allowing us to see the main characters as the supporting cast initially does: two disoriented, incoherent guys hauling a handless Chris Tucker-look alike around everywhere. Of course, eventually the legs would go, and the head, and the arms, but the idea would be that Curren$y and Wiz would gradually get everybody on the beach to toke some Burnie, and would not be able to stop, and implore their friends to join in, so once the movie’s nine-hour running time elapses everybody on the beach has smoked poor, dead Burnie down to his bones.
Madcap? No. Well, maybe at the beginning, but eventually Weekend At Burnie’s would devolve into some grim-HBO-series-esque shit that’s too gruesome and messed up to even titter ironically at, with everybody winding up just as cracked-out and bug-eyed as our heroes.

A horrible idea? Probably, and it’ll never happen. But way worse stuff is shot, scored and chopped every day.