Criticism Is Also an Aesthetic Object

And why it's fine to judge a movie by its trailer. 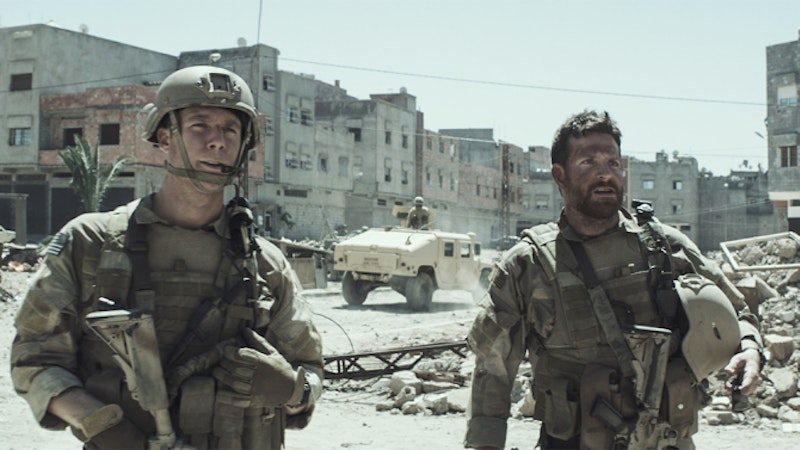 Everybody agrees, more or less, that art is less important than life. And yet, when confronted with a choice between caring about art and caring about life, people will often choose art as the thing to pay attention to. When John Lennon said wonderingly that the Beatles meant more to many kids than Christ, he was recognizing a modern truth. Art is religion; violate its tenets at your peril.

Dennis Jett at The New Republic violated the tenets. In a piece last week, Jett, a professor of international relations at Penn State, wrote about America's war on terror. He pegged his discussion to the trailer for the film American Sniper. As Jett says, the trailer presents Navy SEAL and sniper Chris Kyle as being torn by moral questions as he puts various targets in his sites.

Jett points out that this is disingenuous. In his autobiography, Kyle was not plagued by doubts; on the contrary, he was eager to shoot any male between about 16 and 65, and was pissed he wasn't given a freer hand to kill. Jett argues that Hollywood films like Zero Dark Thirty tend to create moral quandaries for the purposes of drama. The "complexity" which makes the films seem deep is actually, Jett suggests, shilly-shallying and unrealistic. Sometimes the truth is simple; torture is wrong, the murdering sniper had no particular qualms about killing people. Jett concludes that, if the film were to follow through on the trailer, it would be fundamentally misleading.

So, to me, there's a lot more there than you'd usually get in an article about a film. Jett addresses important issues about how we sell the war on terror to ourselves. He writes about how calls for nuance and complexity can be a way to avoid discussing difficult issues, rather than some sort of courageous embrace of truth. It's not a long essay, and its ambitions aren't enormous, but as Internet think pieces go, it was more worthwhile and enlightening than most.

The Internet, though, disagrees with me. To the vast majority of people I saw discussing this piece on Twitter, everything in this essay up to now is irrelevant except for one, vital piece of information. Jett wrote about the trailer. He hadn't seen the film.

Of course, Jett makes it clear he didn't see the film. There isn't any deception. But for commenters, the issue isn't deception. It's art. Issues around the war on terror are secondary; what matters is a fair assessment of the aesthetic object, the film. And "art" here is specifically defined. The trailer doesn't count; Hollywood says the main thing is the film, so the thing you have to talk about is the film. Otherwise you're lazy—even if you've read the autobiography.

The trailer will probably be seen by more people than the film, so if you're discussing dissemination of ideas, focusing on the trailer makes a certain amount of sense. And more than that, if as a critic you have something to say about the trailer, what's wrong with saying it? This is the piece of culture you have in front of you; why should you be required to talk about something else instead? If he goes to see the film and it’s different than the trailer, I'd be interested in hearing him talk about that. But there's no reason he should have to, unless you feel like Hollywood's particular vision of its own product and how it should be approached is more important (and overshadows) discussion of the war on terror itself.

You could see this as reverence for art winning out over reverence for reality. But criticism is an aesthetic object as well—and an older one than film. Insisting that criticism be subordinate to movies seems less like a plea for the integrity of art, and more like an assertion of fandom rights. People are fans of film; no one really cares much about criticism. Therefore film is the thing that matters; criticism has to be fair to, and deferential to, film, or else ridicule and scorn will be unleashed. As so often, a charge of lack of professionalism boils down to anger that someone, somewhere, hasn't jumped through your particular hoops. And so, as Jett says, the genre of complex, morally ambiguous big-budget Hollywood drama puts a limit on what you're allowed to say, or think, or hear.