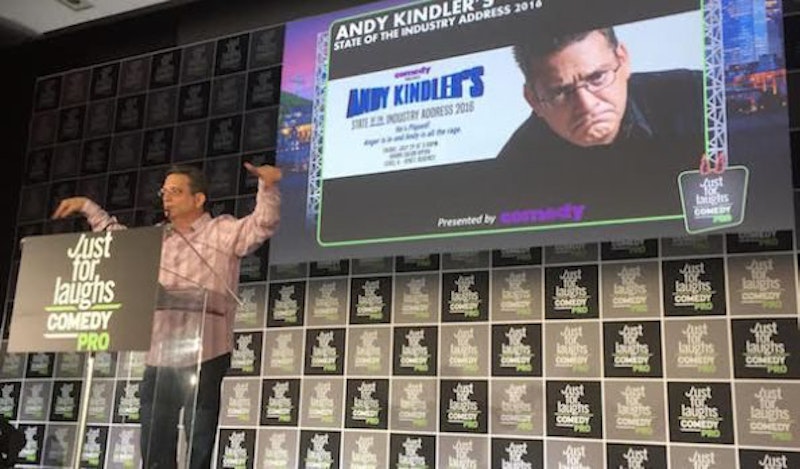 It's that time of year when the comedy world's ombudsman, standup comic Andy Kindler, travels to the Montreal's Just For Laughs comedy festival to deliver his annual State of the Industry address to insiders in the laugh business. Kindler’s used his yearly platform for two decades now to scold comics he disapproves of, ostensibly on a mission to insure comedy's high standards are upheld, and his holier-than-thou, whining persona makes him an easy fit for this role. Who better to lay down the law than someone who always believes that he occupies the moral high ground?

Kindler took the mic in Montreal last Friday and wasted no time taking potshots at his personal obsession, Bill Maher, who's a "horrible human being" and "overrated idiot" who uses too much hair gel, and doesn't understand the "structure" of comedy." While these remarks made him look petty and pedantic, Kindler's 2016 performance was mellower than years past. Perhaps he's been living in Los Angeles too long. This time around, his appearance felt more like one of his standup comedy sets with a few obligatory personal putdowns of his usual enemies sprinkled in.

Maybe that wasn't such a good idea, as his comedy set was pretty weak for a "comic's comic”” allegedly so good he keeps the lesser comic mortals in line. Kindler sprinkled in plenty of self-deprecation ("This year I'm taking my career public”) aimed at immunizing himself from the inevitable backlash, but his own sub-par material made it even more fitting. Some sort of apology was necessary. Kindler joked that the old comedy television show Laugh In hasn't held up over time to the extent that, when you watch it, the TV set “slides down the wall.” The room went completely silent, just like it did when he ”joked” that the camera “adds 10 pounds of racism” to Donald Trump and that Lorne Michaels had Trump host SNL in order to “make racism funny again.” Kindler even mentioned, after a string of dud jokes, that he wasn't even getting laughs any more. Why would that surprise him?

Kindler made sure to dump all over another of his personal obsessions, Ricky Gervais, who along with Maher is associated with the “new atheists” that Kindler despises. The British comedian criticizes all religions, just as Maher does, but Kindler is unable to distinguish the criticism of an ideology with personal criticism of a religion’s adherents, so he considers both of them bigots. He cherry-picked a couple of lines from Gervais to make him look like a fool, but he just came off sounding like a petty guy.

The Hitler-obsessed comic is running out of steam. He originally got the job by writing the incisive and funny critique of bad comedy, “The Hack's Handbook,” for National Lampoon, but he appears to have become what he rose to prominence by mocking—a comic hack. Kindler delivered a flabby set at the Just For Laughs festival unbefitting of the “overseer” role he was assigned, making him look either lazy or just clueless. He often got more laughs when he used self-deprecation to relieve the tension after his jokes bombed, and his comedy critiques were mostly bereft of substance, coming off more as politically-motivated personal attacks, or just plain envy.

If there’s a more politically correct comic in the U.S. than Andy Kindler I’d be surprised. That works to his disadvantage, as political correctness is the enemy of comedy. He's lost his edge after raging against comic hackdom for 20 years, which he even admitted on Friday by speculating that maybe he shouldn't give this speech every year. If he thinks it's funny to say that Jay Leno owns a car “that runs on the machinations of his passive-aggressive personality” then he’s onto something.