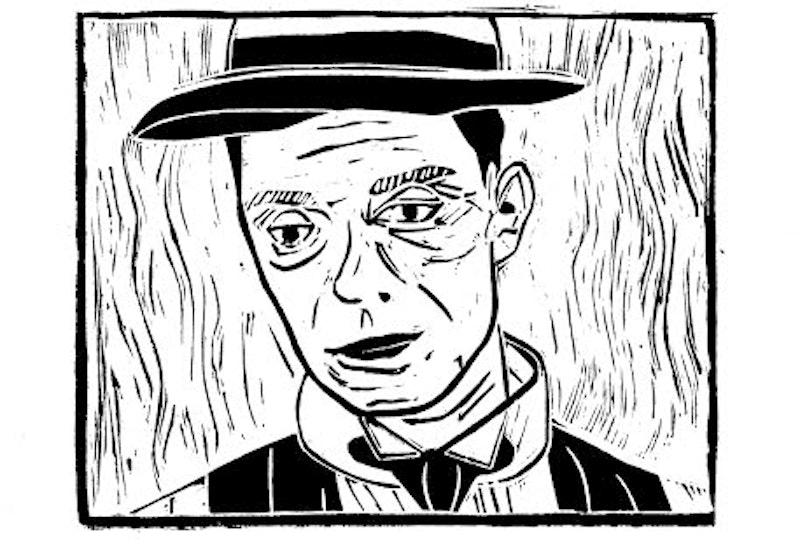 Buster Keaton was one of the three great silent film comedians (along with Charlie Chaplin and Harold Lloyd). Born into a performing family, Keaton’s father Joe owned a traveling vaudeville show with Harry Houdini called the Mohawk Indian Medicine Company. At the age of 18 months, Keaton fell down a flight of stairs without injury. Houdini observed the event and said, “That was a real buster.” The nickname stuck.

Keaton began performing with his parents at three in a comedy act called “The Three Keatons.” As part of the act, he was manhandled and tossed around stage by his father while his mother played saxophone on the side. A suitcase handle was sewn into Keaton’s clothing to make him easier to toss. Father Joe was arrested for child abuse on stage but after the boy showed authorities he had no bruises or broken bones, the elder Keaton was released. Keaton became known as “the little boy who can’t be damaged.”

Keaton learned early on how to take a pratfall. “The secret is landing limp and breaking the fall with a foot or a hand. Several times I’d have been killed if I hadn’t been able to land like a cat.” Keaton also learned that smiling on stage drew fewer laughs than a deadpan expression. This is how Keaton acquired his famous “stoneface” demeanor that became his signature.

Keaton served in France with the 40th Infantry during World War I. He suffered an ear infection that permanently damaged his hearing. After the war, he began working at the Talmadge Studios in New York, and befriended Roscoe “Fatty” Arbuckle who hired Keaton as a co-star and gag writer. Keaton’s first film performance came in The Butcher Boy in 1917. Soon, Keaton was directing Arbuckle’s films. (When Arbuckle was falsely accused of raping actress Virginia Rappe in 1921, Keaton was one of the few people to defend Arbuckle’s character.)

Keaton began making two-reel comedies and full-length features. His golden period was 1920-29 and included the classics The General, The Navigator and The Cameraman. He became known for creating brilliant gags and dangerous stunts. In Sherlock, Jr., Keaton broke his neck when a torrent of water from a railroad water tank fell on his head. During Steamboat Bill, Jr., Keaton stood motionless as the façade of a two-story building toppled onto him. He emerged unscathed thanks to a single open window. The house weighed two tons and provided just a few inches of clearance around his body. Throughout the stunts, Keaton maintained a stoic, emotionless expression.

Keaton appealed to audiences as an everyman who refused to succumb to life’s difficulties. He was known for his large eyes, solemn stare and ever-present porkpie hat. He made the hat himself. “I knew straw was too fragile for my kind of antics so I took a good Stetson and cut it down, then I stiffened the brim with sugar water.”

When movies turned to sound in 1927, Keaton signed with MGM, a decision he later called the worst of his life. MGM limited Keaton’s creative input and cast him in dialogue-heavy scripts with few gags. They forced him to use a stunt double despite Keaton’s concern that “stuntmen don’t get laughs.” The studio teamed the quiet Keaton with the overly enthusiastic Jimmy Durante, a decision that yielded box office success but less than memorable films. Keaton complained so much that MGM fired him after production of the 1933 film What! No Beer?

He was demoralized by the state of his career, and was also stuck in a loveless marriage to Natalie Talmadge, sister-in-law of studio head Joseph Schenk. They had two children but Talmadge sued Keaton for divorce in 1932 and took his entire fortune. She refused her sons any contact with their father. Keaton turned to alcohol. At one point he was briefly institutionalized, and escaped his strait jacket with tricks he learned from his vaudeville days.

In 1933, Keaton married his nurse during an alcoholic binge. He later claimed no memory of the event calling those years his “alcoholic blackout” period. They divorced in 1936, again at great financial cost to Keaton. After making a few films in Europe, Keaton became a gag writer for the Marx Brothers and Red Skelton. He also mentored Lucille Ball, advising her to eschew dramatic films for comedy. In 1939, Keaton made 10 short films for Jules White (who later directed The Three Stooges). Audiences enjoyed the films but Keaton was simply rehashing his early work. He swore he would never “make another crummy two-reeler.”

In 1940, Keaton married Eleanor Norris, a woman 23 years his junior. They would remain married the rest of his life. She was credited for saving Keaton’s life by stopping his heavy drinking. Keaton played his last starring role in 1946 in the Mexican science fiction film Boom In the Moon. He appeared in cameos in big budget studio films like Sunset Boulevard, Around the World in 80 Days and It’s A Mad, Mad, Mad, Mad World. He also appeared with Charlie Chaplin in the vaudeville tribute film Limelight. This was the only time Chaplin and Keaton acted together on film.

Keaton turned to television in the 1950s. He hosted The Buster Keaton Show and appeared often on the Ed Wynn Variety Show. During one appearance with Wynn, the 55-year-old Keaton recreated a stunt from his youth where he propped a foot on a table then swung up a second foot only to crash to the ground. Wynn asked Keaton how he did his falls. Keaton opened his shirt and revealed bruises all over his torso.

In 1954, Keaton sold his beloved Beverly Hills Home to actor James Mason. Mason found several cans of Keaton’s silent films including the lost 1921 classic The Boat. Keaton continued his television work into the 60s including stints on The Lucy Show, Candid Camera and The Twilight Zone. He also appeared in the teen beach movies Pajama Party and Beach Blanket Bingo. His last film role came in 1966 in A Funny Thing Happened On The Way to the Forum. Despite ill health, he insisted on doing his own stunts. Keaton died of lung cancer in 1966 at age 70.  He had no idea he was terminally ill. He thought he was recovering from bronchitis. He died shortly after playing cards with his wife Eleanor.