If Joffrey had a direwolf would you like him too? 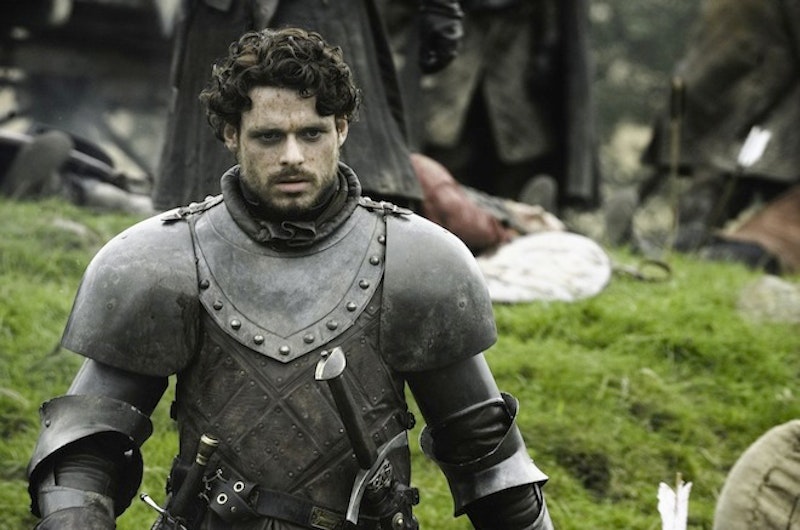 Robb Stark commands grown men when he is 15. All right, that's a stretch. But here's something else. He wins his men's respect by allowing a large savage animal to maul one of them. This is the Greatjon episode in A Game of Thrones, the first book in George R.R. Martin's giant series of novels about the Lannisters and the Starks and Daenerys and everyone else.

Young Robb has to show the lords of his realm that he's their leader. The Greatjon, that noisemaking old fool, pulls his sword and steps up to him, then gets laid flat on his back with stumps where two of his fingers had been. What happens in between is that Robb says a “quiet word” and his loyal direwolf launches itself. Doing so, it demonstrates that an animal the size of a Volkswagen is much tougher than an old man.

As the book tells it, this scene is witnessed by a roomful of nobles accustomed to fighting for their lives with muscle-intensive weapons, and these men all nod their heads and say to themselves, “Yes, the kid has got what it takes.” I doubt it. I think they'd see a punk. What if King Joffrey, that little wart, had the Hound chop down somebody who was bothering him? Joffrey has no trouble ordering a monstrous sidekick to mess up people who bother him—that's why he's a villain. Robb does the same thing, but he's a hero. Of course, Joffrey would make a big deal about it, whereas Robb is quiet. Manners count.

Instead the book makes a noise on Robb's behalf. He gets off a good line to the effect that the Greatjon had been waving his sword about because he wanted to help Robb cut his meat. The mutilated nobleman climbs to his feet, “sucking at the red stumps of fingers... but then, astonishingly, the huge man laughed. 'Your meat,' he roared, 'is bloody tough.'” A cute sort of tribute if Robb had matched the fellow strength for strength and proved the better man. That is exactly what didn't happen, but the book hauls Robb up on its shoulders and marches him around.

Robb was lucky. He stumbled on his wolf creature when it was a cub, and because he was a lord's son he had a castle to house and raise the thing. Eventually the beast got so big it could dismember adult men at will. At this point a fellow was dumb enough to get nasty while in range of the animal, with predictable results. There we have Robb's triumph. It's like the rich guy's kid proving he's a better man because his dad bought him a faster car.

The fucking internet. It keeps pelting certain approved attitudes at your head, and it doesn't make sure if they match up. Everybody's against privilege and in favor of Game of Thrones, and they don't notice when a weak spot in the latter is papered over by an application of the former. No, we don't have to worry about Robb Stark victimizing people because of his leg up in life; he doesn't exist. But can't people see what's in front of them?