God Forbid: The Sex Scandal That Brought Down a Dynasty is a passable but superfluous documentary only in part about Jerry Falwell, Jr. 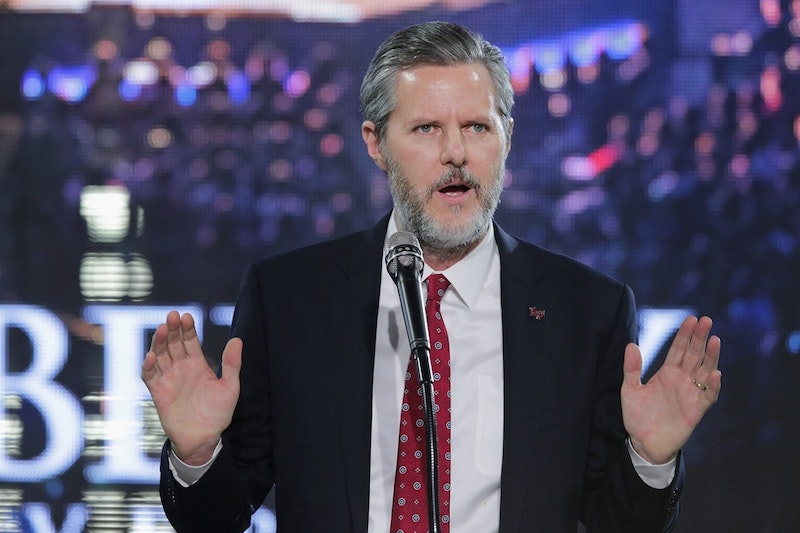 The sordid fall from grace of Jerry Falwell, Jr., the president of Liberty University and the pioneering evangelist/political activist/huckster of the same name, was screaming for the documentary treatment. And now it's gotten it from Billy Corben, the king of nonfiction films about South Florida sleaze. Liberty University is in Virginia and not Florida, but Miami was the hometown of Giancarlo Granda, who the world knows as the "pool boy" at the center of Falwell's scandal.

God Forbid: The Sex Scandal That Brought Down a Dynasty, which lands on Hulu November 1, is valuable when it's concentrating on this wild story, but less compelling when it tries to draw larger lessons about What America is Today. There are reenactments of key moments, which is seldom a good idea. Corben's earlier documentary Screwball had the inventive idea of having children portray Alex Rodriguez and the various Biogenesis conspirators, but that wasn't going to work in this one.

Granda, the "pool boy," speaks, and is the doc's primary source, telling the entire story of how, at 20, he met the Falwells at Miami's Fontainebleau Hotel. There, he was propositioned by Falwell's wife Becki, who had sex with him while her husband watched. Not long after, Granda was pulled into a bizarre real estate deal—essentially, the Falwells gave him a hotel, while maintaining unbreakable financial ties—leading to a lawsuit that ended up making it public. There was also a Trump angle, with Falwell's endorsement of him in 2016 opening the door to the massive, years-long Faustian bargain between Trump and the Christian right, where they get their judicial appointments, while having to maintain the facade that a lifelong secular horndog like Trump actually gives a hoot about God.

It's also heavily implied that Michael Cohen made nude photos of Becki disappear as a quid pro quo in exchange for the endorsement, but that hasn't been well-established, and Cohen didn’t agree to appear in the documentary. Neither did either Falwell, but Tom Arnold did, in order to tell the Cohen story second-hand. Also on camera is Garda's sister, who apparently was told about her brother's sexual assignations. Garda proves a compelling interview subject. He's a Cuban-American who sees a parallel between Trump and the dictator his family fled. This analogy isn't drawn often, but when I went to Cuba—between the cult of personality, lunatic fan art and endless speeches—the Trump/Fidel parallels were everywhere.

One of the fascinating things about the Falwell scandal is how slowly the details dribbled out. The initial longform stories, some written by reporter and documentary participant Aram Roston, were among the greatest masterpieces of innuendo and subtext I'd ever read. The reporters hadn't nailed down all the details of the affair part yet, so it was left to Twitter to suss it all out. But it's good to have everything in one place.

At that the same time, the footage of the Falwells or Liberty made me think of HBO's The Righteous Gemstones; I've written before that Jerry Falwell, Jr., is like all three Gemstone children combined into one person. He may not be as loathsome as his departed father—but the younger Falwell is portrayed as a pathetic individual even before the cuckolding comes into play. He's shown as greedy, power-hungry, hypocritical, a drunk, and craven political hack; in the final coup de grace, he tries to save his own ass by throwing his own wife under the bus. The hypocrisy part is doubly the case, because Falwell was getting cucked by his wife, and drinking on boats with strange women with his parents unbuttoned, while presiding over a university where students, until relatively recently, weren’t allowed to drink, dance or kiss.

That said, I'm not sure we needed the final argument about America in the age of Trump, which says nothing that hasn't been in 15 other documentaries this year. A good soundtrack, very heavy on the Moby, does help.