Prehistoric gender attitudes are alive and well in American comedy. 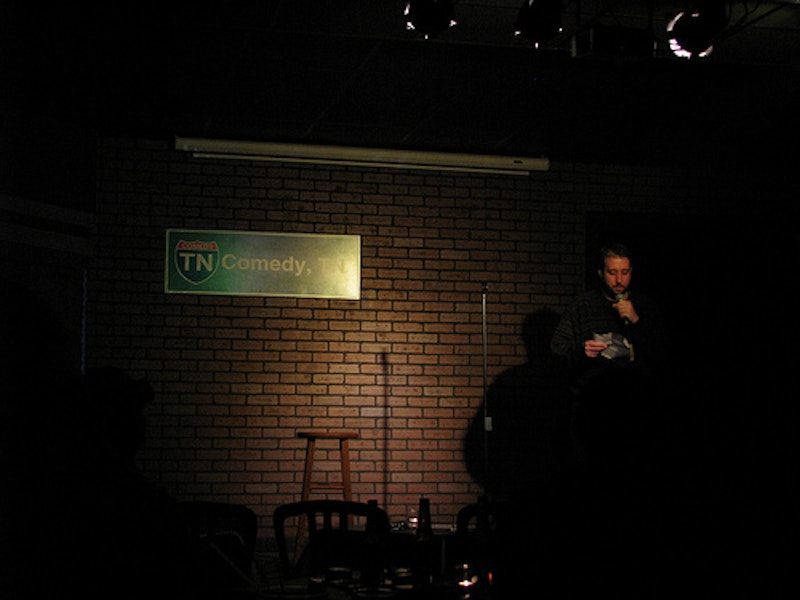 "Are you guys in love?" a stand-up comic asked a young couple sitting in the front row at The Comedy Cellar in the East Village last Saturday night.

"One hundred percent, sir," the young man replied, before his girlfriend could say anything.

"Good answer," the comic quipped. "That's how you get your dick sucked."

There's nothing like a night out at a New York comedy club to make you weep for the future of humanity. The show opened with a quick but hilarious reference to current events, when one comic recommended that a male audience member "Chris Brown" his wife on occasion, to ensure her respect for him.

Then came the above exchange, in which the comedian exposed two age-old and apparently side-splitting truths about men and women: The only reason for a man to tell a woman that he loves her is so that she'll perform oral sex on him, and women hate sex and have to be duped into it by false professions of love. From there, if you can believe it, things went downhill. By the end of the night I was forced to conclude that each of these men (and disappointingly, all the comics were men) expect that it is perfectly normal-desirable, even-for men to hate the women they sleep with.

Every man wants a bigger penis, one comic explained, because every man is convinced that with just a few more inches, his life will be perfect. He'll get a better job and he'll pull better-looking women. But most of all, the comic explained, a man wants a bigger dick because, "You want it to hurt sometimes. You want her to complain that she can feel it in her stomach, and then you say, ‘Yeah, bitch, you can feel it in your stomach, now go take out the trash.'"

Add to this joke an endless litany of jokes about men sucking cock and taking it in the ass, and two things soon became very clear.

Each of these comedians was so desperate to affirm his own heterosexuality, to reassure the audience that he was straight, that collectively, the men spent over an hour reviling and mocking any person who might ever have cause to come within three feet of a penis: gay men, women, prison inmates, and so on. These comics could imagine nothing more degrading than intimate contact with a penis, even if that penis is attached to a stand-up comedian like themselves. And apparently, they were perfectly happy to subject multiple women to that degradation, and to call them "bitches" while they were at it.

The second lesson I took away was that sex, for these men, has nothing to do with pleasure and everything to do with power, violence and pain. To them, sex is a weapon, a way to get revenge. The explanation of the real reason that every man wants a bigger penis, and the belief that the way to a woman's mouth is through her heart, made it perfectly clear that sex, for these men, is about coercion, deception and manipulation. It's not about two people enjoying each other's bodies; it's about a man fucking a woman into submission, or lying to her until she submits to being fucked.

It's not just at stand-up shows where this phenomenon occurs. In movies from American Pie to this year's controversial Observe and Report, coercing women into sex, or using sex as a way to inflict pain on them, is depicted as funny. In both forms of comedy, violence against women is trivialized, and the idea that sex is about power, not pleasure, is reinforced. And in both forms of comedy, harboring disdain, even contempt, for the women you sleep with is depicted as "funny, because it's true."

With these kinds of attitudes, it's hardly surprising that our culture trivializes and makes excuses for domestic violence-I mean "Chris Browning"-and for sexual assault. After all, they're clearly hilarious.

While it's easy to dismiss what comedians say as "just a joke," it's important to think about why a room full of people laughed at jokes about tricking women into oral sex and fucking them until it hurts. It's important to stop and ask ourselves: What does it say about our culture that it's acceptable for people, men and women, to pay to laugh at men when they talk about coercing women into sex and using sex as a weapon?

Furthermore, it's easy to dismiss these comedians as a handful of individual assholes whose views are not to be taken as indicative of how most American men feel about sex, or about women. But when a crowd of 30 or more audience members laughs hysterically at their jokes, that defense simply doesn't hold up.