Time for this ridiculous holiday to walk the plank. 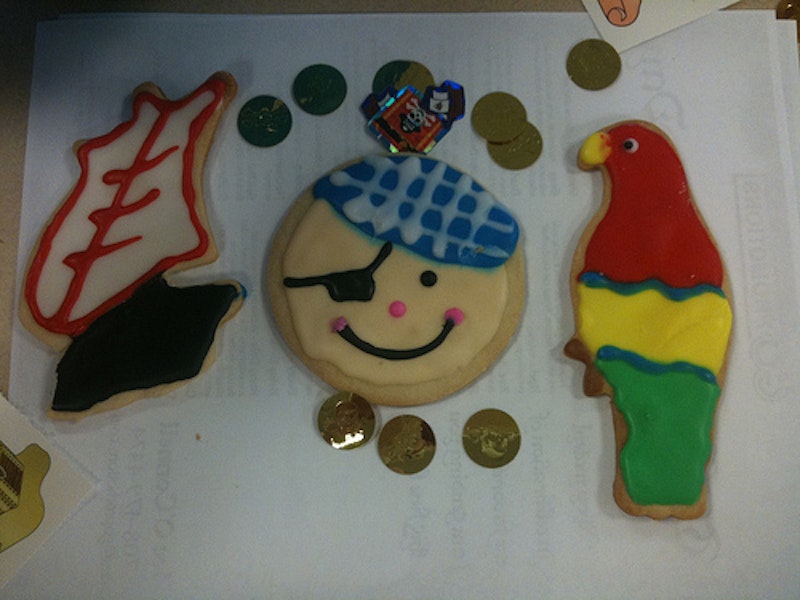 It's that time of year when, high atop the craggy spires of a miserly mountain abode, my black and bitter heart begins to beat off-rhythm. For far below, down in the happy village of Schmuckville, the sounds of "Aargh Matey" and "Walk the planks, ye scurvy dogs," and the ever-popular "Avast, yee landlubbers" can be heard, and my teeth begin to gnash with fury. Whipping my poor dog Max, I carefully weight the most dastardly of plans, double check my equipment, and head down to the metropolis below, slipping into bedrooms to steal puffy pirate shirts and wiping my ass with costume-store eyepatches.

I hate International Talk Like A Pirate Day (I.T.L.A.P.D.) Why do I hate I.T.L.A.P.D.? Perhaps its because my head isn't screwed on just right, or maybe because my shoes are too tight, but whatever the reason is I hate International Talk Like A Pirate Day (I.T.L.A.P.D.) I have hated I.T.L.A.P.D. since I discovered some idiot came up with the idea and found a whole bunch of other idiots to go along with him. I hate the annual CNN.com article recounting its virtues to a middle-American public, hate the people who work at a Pirate-themed restaurant and wear the costume year-round as a "lifestyle choice," hate its unpronounceable acronym. I hate fat girls who somehow think it appropriate to show too much cleavage because their c-cups have been squeezed into a leather bodice, hate their stringy-haired postule-faced boyfriends festooned with fake flintlocks, hate everything about this absurd fake holiday. If you spent last Saturday talking or dressing like a pirate I probably hate you-not because you celebrated I.T.L.A.P.D., but because if you're the kind of person whose heart thrills at the prospect of spending one morning a year greeting their mates and co-workers with a hardy "shiver me timbers," you almost certainly have been spending the other 364 turns of the moon observing that even more popular festival, International Act Like an Asshole Day.

To begin with, Christiandom had already demarcated a 24-hour period during which its acceptable to dress in costume and speak in a silly fashion. It's called Halloween, it's in about a month and a half, and you ought to be able to keep your plastic cutlass in the closet until then. If you want to spend October 31 dressed like an extra from Pirates of the Caribbean 4, knock yourself out. Strap yourself to a barrel and let your roomate use you as his cabin boy, I don't give a shit. But you don't get a special day to act like a specific type of jackass.

To be clear, my objection with I.T.L.A.P.D. does not stem from any discomfort at the thought of ordinary civilians adopting the customs and dress (however inaccurately) of a class of people infamous amongst our forebears for despoilation, pillage, and slaughter. In the first place, the only point of wearing a foreign outfit is if it's either threatening (ghouls, gangsters) or provocatively non-threatening (sexy nurses, sexy nuns). No one goes to a costume party dressed as a productive office worker. And in fact, if last Saturday had been International Act Like A Pirate Day-that is to say if it included some element of thievery, violence and wanton destruction-I'd probably be all for it. As H.L. Mencken once wrote, ''Every normal man must be tempted at times to spit upon his hands, hoist the black flag, and begin slitting throats.'' I can readily imagine myself swinging on a grappling hook through the window of a metro bus, armed to the teeth, collecting valuable and offering commuters the option of joining my fearsome band or walking into incoming traffic.

No, my objection to I.T.L.A.P.D. consists of it being one of the more concrete manifestations of ubiqituous communal quirkiness, the Diablo Cody-ization of our culture, if you will. How exactly mass culture swallowed and shat out everything that was light hearted and original in our culture is beyond me, but it has, and the quicker we all start recognizing it the better off we'll all be. Yes, what a funky, original person you are, joining an alt-cultural movement with global appeal. If you really wanted to mark yourself apart from the rest of America, you might forgo the 16th-century vernacular and try speaking proper grammar, an affectation that seems as unpopular these days as leggings and scurvy.

All right, that wasn't a great argument, but the overriding antipathy I have against I.T.L.A.P.D. makes it difficult to muster coherent thought. The truth is, if you count yourself amongst the ranks of pirate-speakers, I don't really want to win you over to my side so much as tie you to a yardarm and go at you with a cat-of-nine-nails. Christ, now I'm doing it.

When next year rolls around, resist the temptation to talk like a Pirate. If you really have to adopt the vocal mannerisms of a criminal class, I've decided to start a new holiday, also on September 19th, to compete with I.T.L.A.P.D.-International Talk Like A Rapist Day, or I.T.L.A.R.D. The rules are quite simple: rather then introducing yourself to your neighbors with ''hello'' or ''good morning,'' you would say ''Get into my van and I won't hurt you.'' Feel free to really get into the spirit of the thing-carry around a bowie knife and some duct tape, wear a tattered hoodie, get an AC/DC tattoo on your forehead, that kind of thing. Remember, you're getting in on the ground floor with this one, so people might be a little surprised at your new patois. But once they spend a few hours in your emptied basement well, I'm sure they'll come around.