Why Los Angeles is the perfect host city for a noise festival like F-Yeah. 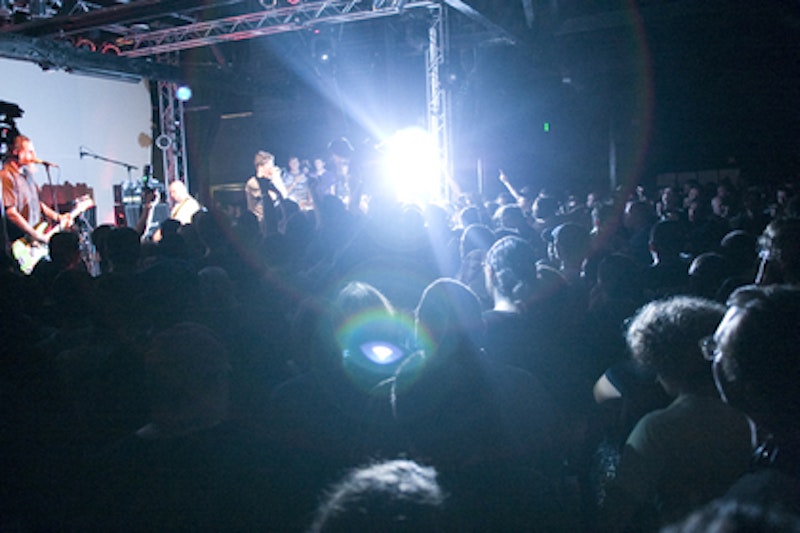 All photos by the author.

Exhibit A - The HideAway
Wherein a studio executive, overwhelmed by a budget billowing out of control, his hope of ever making the money back in ticket sales extinguished, stands up, draws the shades in his office, turns off his headset, walks back to his desk and opens the bottom drawer. He pulls out a square of beige fabric, unfolds and unzips it. He crawls inside, bringing his briefcase with him. He pulls the cover over his head and down to his feet, kneeling to the ground and zippering the cover in two disjointed motions.

Outside of the cover, he is a beige burial mound, its contents long since dead. Or he is a machine gun pillbox, its contents camouflaged for greater impact.

Inside of the cover, he is not in an office, corner or otherwise. He is not on set, on the lot, or in a building. He is also not in the middle of the Palm Springs desert, nor on the top of a mountain in Griffith Park. He is nowhere near Los Angeles; he is simply under a cover.

Outside, he is cowering in fear.

Inside, he is safe; he is warm; he is hiding.

This is a real product.

Exhibit B - The 101, The 10, The 110, The 405
Whereupon many studio executives, not to mention gardeners and failed musicians and production assistants, sit every day.

This is a mischaracterization—they don't go there to sit. They go there, maybe a little late, but not by much, to drive at maybe, maybe 65 ("Can we please do at least 50? How about 45? Any takers? Please?"). They end up barely cresting double digits. They end up yelling and swearing and burning gas, then burning the brake, then burning gas. Or they sink into their car seats, admitting defeat, and rely on NPR droning to tranquilize them.

What they all do is blame it on the city: "Well, that's just L - A," with Los Angeles getting a prefix of varying vulgarity (crazy, fucking, [racial slur], etc. etc.). Any cache the city builds before breakfast with its blue skies and palm trees is blown before work on the freeways. Angelenos park and lock their cars, walk 30 healthy paces to their desks, late, miserable, and wanting only escape.

Whereupon the studio executives will go into their offices, walk over to their desks, and take out squares of beige fabric…

Exhibit C - The F-Yeah Fest
Wherein 40-odd bands got together at the (violent) last throes of August to do something very honest—to make noise.

If mothers and grouchy neighbors and middle school music teachers are to be believed, noise is the antithesis of music. It also can be the antithesis of organization and structure, so it was no small irony that the festival was so well-organized, with noise bands playing next door to comedy acts and DJs and boyfriend–girlfriend two–pieces all on a block of Sunset far removed from the more famous (and now more corporate and tourist-y and boring) rock clubs in Hollywood.

But this section of Sunset was to make its own fame. Noise, understandably, has had trouble establishing itself as a viable music genre. Certainly there was an element of the college radio subset that saved their pennies for the Merzbox, but it wasn't until the F-Yeah Fest that the popular youth culture showed their support for Noise music.

They were wrapped around the corner of the Echoplex and down the block, hipsters waiting in line for Japanther and for Fucked Up and for No Age.

I remember a thought I had upon first visiting L.A. with my friend Alex. We hit the midday rush on Santa Monica Blvd. but, as tourists, the traffic didn't bother the two of us. It must have been a Bentley Continental GT convertible that passed us going Eastbound (but who cares about specifics, right?) that made me think, "L.A. must be the best place in the world to live if you're rich and the worst place if you aren't."

Somehow, it wasn't until last week, after almost a year spent struggling in Los Angeles, that I remembered having this thought. Maybe I couldn't have known how right I was until I found out for myself: It isn't much fun to be young and poor in Los Angeles.

It's the internships that pay less than unemployment, the $12 hamburgers, the Bluetooth headsets we all now have to buy to talk on the phone in our cars and the $200 fines if we don't and, oh yeah, the shockwave traffic jams to greet us when we just want to go home and drink enough cheap beer to get us through the night.

And we wake to waves of financial uncertainty. And we try to keep from looking off into the valley to avoid a glimpse of humanity that resembles a Tron-era computer print-off rather than a sea; 256k colors of urban sprawl and overcrowding. The competition stretches for miles.

There are, of course, glimpses of success, of standing out in a city 45 miles wide. There are Sunday afternoons spent on the roof, watching sunsets and palm trees. We are, after all, living in paradise.

And we all are, when we ignore the competition, on the same team. In a way, the rabid social networking that makes L.A. so infamous, the let's-be-friends-so-I-can-take-advantage-of-you-later kind, is what ties the city together. Angelenos are united in the goal of one day, beating L.A. Of being famous or wealthy or content enough not to care about the price tags or the freeways. The goal, in other words, is survival—together.

The only way to survive is to come to terms with reality. With those that are skinnier and wealthier and happier. With the smog and the earthquakes and the fires and the traffic. To stand and be swallowed by the wave.

To turn the volume up and make the Noise even louder.

And so the young and poor of Los Angeles crowded the F-Yeah Fest not necessarily to illuminate the inequities of life or to rally against them, as with previous movements. No, they stood in line to accept them. To react to the overwhelming exterior with something truly honest and paralyzing: Noise. And it was loud—as loud as the kids of L.A. were brave to listen to it.

After all, the alternative would have been to escape. To face the realities of the city and respond with a beige cover, pulled from a desk, with room for a briefcase.