On Glare Luring Yo (Feeding Tube), which trumps the best of the post-Sonic Youth diaspora and Gate's last few albums. 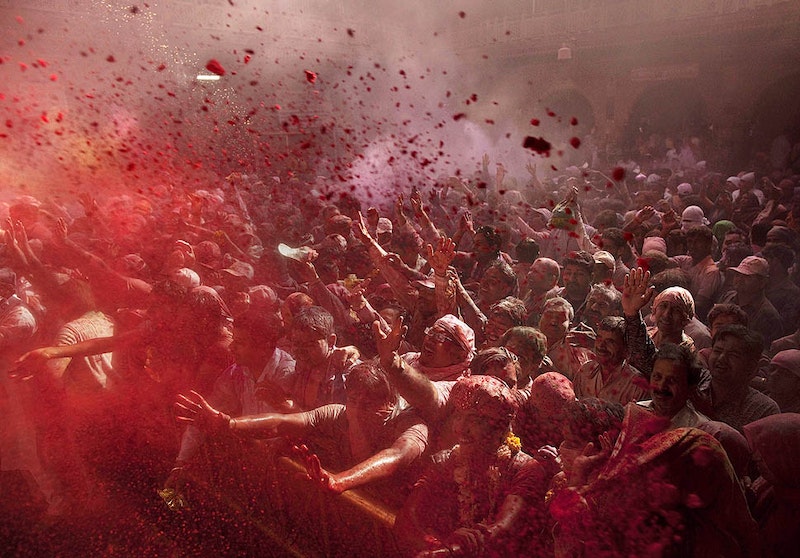 Every spring, thousands of revelers gather at sits around the world to celebrate the festival of Holi, also known as the Festival of Colors. The annual Indian event has its roots in ancient Hindu mythology and offers carte blanche to people who like to hurl fistfuls of colorful powder into the air, en masse, while surrounded by acres and acres of their fellow faithful. Now, this makes for achingly beautiful photo opportunities—the panoramic snapshots pros return with are arguably worth a trillion words—but there's a potential for disaster that lurks at the fringes of crowd scenes like these. From a remove, scores of vivid powder spurts erupting into a unified cloud are vivifying, even inspiring, but the idea of being in the thick of the celebrations is an unsettling one. The religiosity of a happening is no guarantee of anybody's safety. One imagines the worst: struck at random by a stranger, inhaling powder and suddenly unable to breathe, powder getting the eyes, just the whole displaced, alien experience of not being able to see anything or anyone while a mountain of people are yelling and flailing and laughing and having an irrational, spiraling fear that life will never, ever return to the way it was before.

In a way, Glare Luring Yo (Feeding Tube) enlarges this fear, embraces it, and willingly wades out into it. The players here—the Body/Head duo of Bill Nace and Kim Gordon, with Dead C.'s Michael Morley tagging along under his Gate alias—will into being their own massive, swirling cloud of powder. Their powder isn't the Holi powder: it's astringent, mixed with coal dust and asbestos and stranger things besides, as though this non-traditional trio of guitarists were scoring the aftermath of the demolition of housing projects constructed almost entirely from slabs of ebony chalk.

In a sense, Yo is a testament to the possibilities of the guitar. Dense ripples shove through the smoke at moments, like the hulking carcasses of machines stirring deep within quarries' guts, yet they're equally capable of jingling like bells on a dazed beagle's collar or lowing like bovines. Drones and counter-drones thicken and harden into rancid stalagmites or evoke distant attempts to sharpen swords on concrete or suggest a sort of reptilian, Zen equanimity. This haze plays by its own unwritten rules and has its own weather: the rue of tripled, probing guitar and burgeoning hiss alternately thins or condenses, the tempos gather heads of poisoned steam before collapsing back into themselves without anyone being the wiser. Diversions and perspectives are unique to each channel. A lethargic excavation is occurring at the same time as some very profound, elevated levitation.

Gordon's vocals are the special ingredient here. I have no idea what she's singing about; neither does she, probably, but knowingly or not her utterances join the other present contrails as a manifestation of the enormity of the experience unfolding here. There she is, holding a note beyond the point of no return, or inadvertently triggering a daub of feedback, or becoming in a very literal sense the sole bass element at the core of one of 2013's most involving LPs, thus far.