Mental health circles the drain as people ask themselves "What can I do?" after the protests. 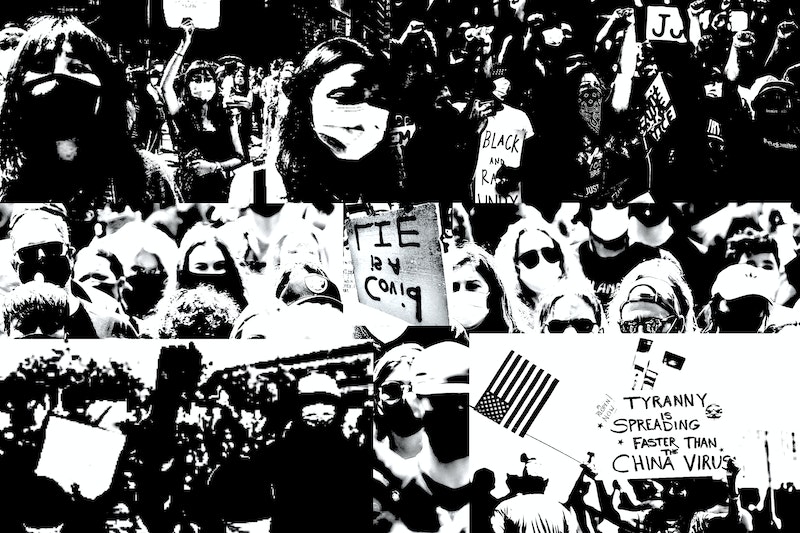 There’s nothing left to do but wait. It’s summer and there’s nothing left to do except hope for next summer. What would people be talking about on Twitter on a “normal” Saturday afternoon in June in America? A new Wonder Woman movie, baseball, the upcoming Olympics in Tokyo, and Pride parades, festivals, and events all over the world. None of this is possible now for obvious reasons. And so the recreation continues at home, but still aimed outwards, expressed as if nothing changed at all, that we can still participate in the frivolous world we knew before. Millions of Americans treasure (very publicly or in terrified silence) the true AmEx Gold Card, being white. There’s nothing like it. Except being extremely rich.

Trump people don’t wear masks, and they probably lick flagpoles in front of photographers just to prove a point. People protesting the murder of George Floyd, Breonna Taylor, Tony McDade, and countless black victims of police brutality and murder—they wore masks. But when you’re getting shot at by lug-head cops without a conscience and kettled into tight groups and pushed into barriers and sprayed with gases that expired years ago and aren’t covered under the Geneva Convention—how much biological spread is going on there?

This isn’t a rhetorical or sarcastic question, it’s something I thought about constantly during the protests: Oh my god, what if this doubles the death count? I didn't go to any marches because of this: by the logic of March, April, and most of May, any large gathering was approximate to manslaughter. Suddenly coronavirus vanishes from the news, and now people are blaming themselves (but moslty each other) for "forgetting" about the virus, as if they weren't fully abetted by a media and a government that does not know what to do and does not care if we die.

What happened in Minneapolis was a much more aggressive sequel to Baltimore 2015, and that’s how everyone outside of Minneapolis saw it, as a sequel in a long line of “major news events” that we receive and interact with in the same way one plays a video game or watches a movie. The action movie aesthetics and sensationalism isn’t limited to cable news: on Twitch, compilations of protest streams from across the world could be scrolled and accessed at leisure, a new recreation for a bourgeois that doesn’t realize it is being left behind, too.

Aimee Terese—a writer long ago kicked off Twitter and made a pariah by her “peers,” who are now so bored they are coming after anyone on taller stilts. Don’t you degenerates have anything better to do than get people fired for nothing just because you’re bored and bitter?—tweeted something I found really chilling: “The difference today is that these are not a protest against elites to which the elites can respond. These are the violent thrashings of a petit bourgeois being lumpenized + the existing lumpenproletariat + some mixture of workers whose interests the state committed to ignoring.”

It’s a normal and expected response to feel insane in America right now. The obscenity and open atrocities of the Trump administration aren’t surprising. They’re not as scary as the anemic and surreal response by the Democrats, who by now, are trying their hardest to throw the election to Trump and try out for a new musical on Broadway by Lin-Manuel Miranda. The Kente cloth, the cops kneeling and marching with protestors, painting streets with slogans and hashtags, the statues torn down, even the Capitol Hill Autonomous Zone—the last week has felt like being put in a blender with every major issue of the 2010s and just going in headfirst: spinning, disoriented, wet, and bleeding.

Occupy Wall Street, Black Lives Matter, Confederate statues, racism and misogyny, celebrities still failing to realize that “the Empire” is over and the curtain has fallen and not only do people not care what they have to say about current events anymore, they actively despise these celebrities for saying anything at all. Because they just want attention, and like so many “normal people,” they too are flailing for some control in this increasingly bleak reality. Only Dave Chappelle was able to break through the fog with his blistering special 8:46.

He rants righteously against Don Lemon and Candace Owens, the latter “the most articulate idiot I’ve ever seen,” and the former, an empty-headed agitator with hypocritical notions of what it means to be famous and what that “responsibility” entails. On his CNN show, Lemon started listing celebrities who had “said nothing” since George Floyd’s murder on May 24. Chappelle screams, “I DARE you to say my name,” before reiterating that the only thing he could do, the right thing to do, was shut the fuck up and listen. He put out 8:46 with a brief note about not usually releasing “something so unrefined,” but that he hopes people understand.

It’s a fantastic piece, blurring the line between standup comedy, spoken word, town hall, and a wake. Held in a wedding pavilion in rural Ohio, with seating only in pairs and everyone (less than 50 people) wearing masks throughout the evening. Chappelle sits smoking cigarettes and talks. It’s a powerful example of art as the ultimate means through adversity, when all hope is lost elsewhere and there are no leaders anywhere.

One more inanity: this isn’t 1968, or 1918, or 1860. It is 2020 and it is happening now. Thinking about the past and making comparisons is a way of avoiding the present. Living through history is not something to be excited about now, it's something to take in stride. Past crises give a vague idea of what could happen and what we could do differently. In terms of the deteriorating mental health of the media and everyone addicted to the Internet, I recommend as always logging off and reading, watching lots of movies, taking walks if you can, and for something specific, read about what life was like at home in America during World War II. A rending terror loomed over the world then and people could still function. In a crisis, yes, but to function in a crisis, isn't that the height of life? Now, life is happening all of the time.