Asking for Spare Change in the Mythical Post-Racial America

It's not Barack Obama's fault, but all the talk about a new era in race relations is mostly pure fiction. 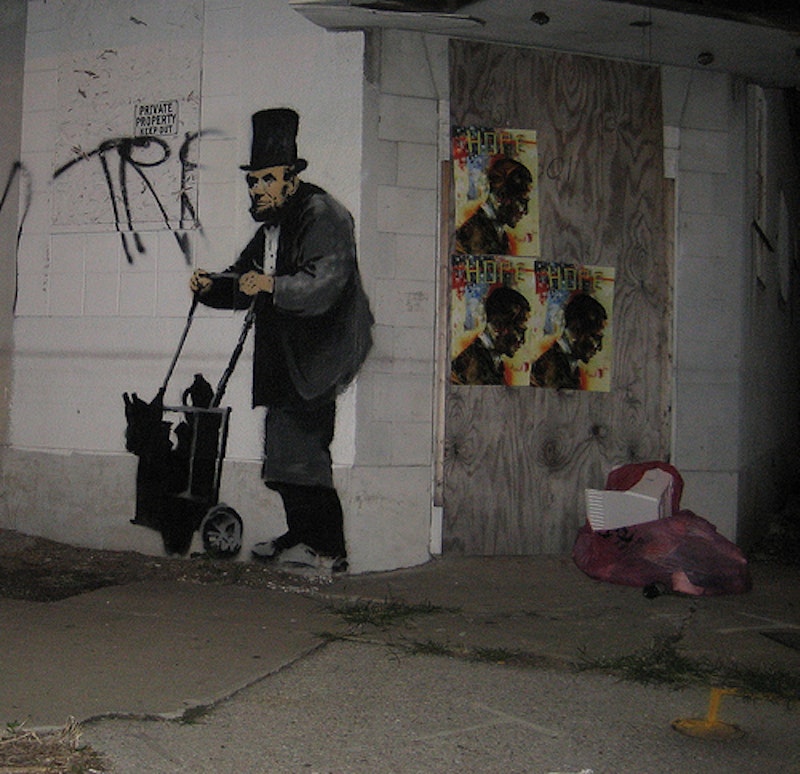 Last Thursday afternoon, a muggy day in New York, I was on the Number 4 train with my two sons, returning to midtown Manhattan after watching the rejuvenated Texas Rangers slap down the Yankees, when a young woman engaged me in conversation. She was a panhandler, plain to see, making the rounds from car to car, and the patter wasn't particularly believable or imaginative, half-heartedly passed off something like this: "Mister, I'm seven months pregnant and if you could give me five dollars I might be able to buy some milk and bread for tonight." Generally, I'm fairly good-natured when confronted with such a situation, and heard her out, politely declined, and expected she'd move on to the next mark.

Instead-and this is a trend I've noticed just recently-she angrily spat out the words, "If I was a white woman, you'd open your big wallet, you fucking honky. You know you would, asshole!" Not true, but that's besides the point, and I did get a shred of satisfaction when she received a similar rebuff from the guy next to me, who happened to be black; in fact, he was more demonstrative, telling the woman to stop humiliating herself. That didn't go over too well, so she turned to a well-dressed man holding onto a nearby pole as the express train hurtled on its way. "I don't communicate with vagrants like you," he said with a nervous titter, which seemed a little over the top in an enclosed area, but after dressing him down with an even more explicit accusation of racism-"We'll see who gets the last laugh!"-she did take off for perhaps a more lucrative group of commuters and tourists.

The previous day, while waiting for my kids to get their lunch at Paul's Da Burger Joint at St. Mark's Pl. and 2nd Ave, I was leaving the excellent newsstand next door when a shirtless fellow who could've been 20 or 40, hard to tell, tapped me on the shoulder and asked for some money. I didn't really appreciate the personal contact, and so told him no, and was loudly called a "white motherfucker," which, of course, was half true, but it was jarring nonetheless.

There's a lot of jabber in the media about Barack Obama ushering in the era of "post-racial America," or not, but I'll leave that larger theme to the armchair philosophers and simply weigh in with the opinion that in the past year (with the recession undoubtedly playing a big part), the demeanor of the homeless or street people or beggars or scamsters or hobos, whatever you want to call them, has become a lot more mean and aggro, with the racial overtones becoming more pronounced month by month. Like any city dweller who does a lot of walking, whether in New York or Baltimore, I come across a lot of people asking for handouts, and I probably acquiesce about 40 percent of the time, giving a buck or two depending upon an admittedly snap judgment of the sincerity of the solicitor. It'd take an exceedingly cold-hearted man or woman to ignore, say, an amputee or obvious AIDS victim (although they're less visible today than in the early 90s), but I don't feel the need to contribute to an able-bodied person who's making a living by hustling people on the street.

That's not to say I don't appreciate the hard work it takes to work crowds for hours upon hours, and anyone who can collect $200 a day, tax-free, has a good racket going. There's a certain amount of entrepreneurship in such a vocation, and don't scoff or claim these hucksters are as rare as an Orioles victory in August; years ago, I used to frequent a dive bar on Houston St. in Manhattan called Milano's, and any number of regulars, once I'd buy them a shot of rail whiskey, would explain the tricks of the trade.

I just don't like being called a "white motherfucker" for no reason.

Again, the lingering recession has obviously increased the numbers of panhandlers, but the angrier tone reminds me of similar times more than two decades ago, when the homeless problem in major cities was becoming more acute. I clearly remember a December night in 1987, checking my overcoat in the lobby of the World Trade Center, on the way to a Christmas party at Windows on the World, and feeling despair at the very weird juxtaposition of affluent New Yorkers in suits and fancy dresses, with hundreds of people sleeping in the lobby, undeterred by security personnel who, probably against management's wishes, just couldn't kick out these people back to the streets where it was windy and 20 degrees. Even then, though, the racial element wasn't as in play as it appears to be today. In fact, the Manhattan of 1987 might've been more "post-racial" than this current decade.

Skipping back more years, in the early 1970s, the subways in New York, at least late at night, could be fairly harrowing. One time, returning from a party in Queens, on a train back to my friend's dorm room at Barnard, a little worse for wear, I was on a car by myself at one in the morning, save a trio of very menacing teenagers who immediately sized me up as a dumb-ass doofus, even though my attire was standard-issue uniform of the time: blue jeans, flannel shirt and a thrift-store jacket. One of the guys looked me up and down, then opened his shirt to show me his pistol, as if to say, "This is our train," and I was all too happy to comply and made my way to other, more populated quarters, a little weak in the knees.

At this juncture I'm fearful of heading into the amateur sociological turf of The New York Times' David Brooks, so let's get back to Yankee Stadium.

(Brooks, who was expertly skewered by Gabriel Sherman in the Sept. 9 New Republic—"The story behind the Obama-Brooks bromance"—is truly out of control. After acknowledging to Sherman that he's a favorite of liberals who don't read other non-preaching-to-the-choir columnists, Brooks says, "I do wish more people walked up to me and said, ‘I'm a conservative and I love you.' But, mostly, they don't read the Times." Spare me: the Times has, mercifully, lost its swagger, but any serious conservative obviously reads the paper. Maybe not Maureen Dowd anymore, but definitely Krugman and even the mushy Brooks. Think he's not the gummy bear of pundits? Last week, in his requisite piece about the legacy of Teddy Kennedy, in which he repeated the common line of the moment, that Kennedy's inarticulate challenge to Jimmy Carter in 1980 released him to craft monumental and bipartisan legislation, Brooks didn't even mention Teddy's scurrilous attack on Robert Bork in 1987.)

Oh right, the Yanks. The stench is in the air that 2009 will be the year the Bombers win it all, and even though the game the kids and I saw against the Rangers was a loss-I don't think Phil Coke will be given much responsibility in the post-season-the team's new digs are fairly audacious. That's not an unequivocal endorsement, although the seating is far more comfortable than the Yankee Stadium built in 1923 and terribly renovated in the mid-70s. You walk into the lobby of where, as the franchise's chief YES cable station shill Michael Kay says, "Greatness has a new home," and the sheer grandiosity is overwhelming. In fact, with the giant banners of players past and present, massive television screens and shop after shop after bar after restaurant, the immediate impression is that this joint looks just like an airport, although with a hint of Albert Speer-like architecture. The vittles are a lot better-who wouldn't prefer a Nathan's dog to one boiled for hours in a vendor's cart?-but the lines are just as long as before, meaning if you slip out to Johnny Rockets or maybe just a bag of peanuts, it's likely at least two innings will have passed by the time you return to the seats.

Nevertheless, my first visit there was a lot of fun, and not one person called me a "white motherfucker." Now, there is the fact that most of the crowd is white, making it perhaps "pre-racial," but my head hurts just enough thinking about what team, once the Red Sox are either aced out of October play, or lose in the first round, I'm going to root for to deny the Yanks their first World Series victory since 2000. I'm inclined to favor the Tigers, but really, any club will do.