A Really Dumb Controversy About Comics and Women

Tessa, what are you doing in that man's comic strip? 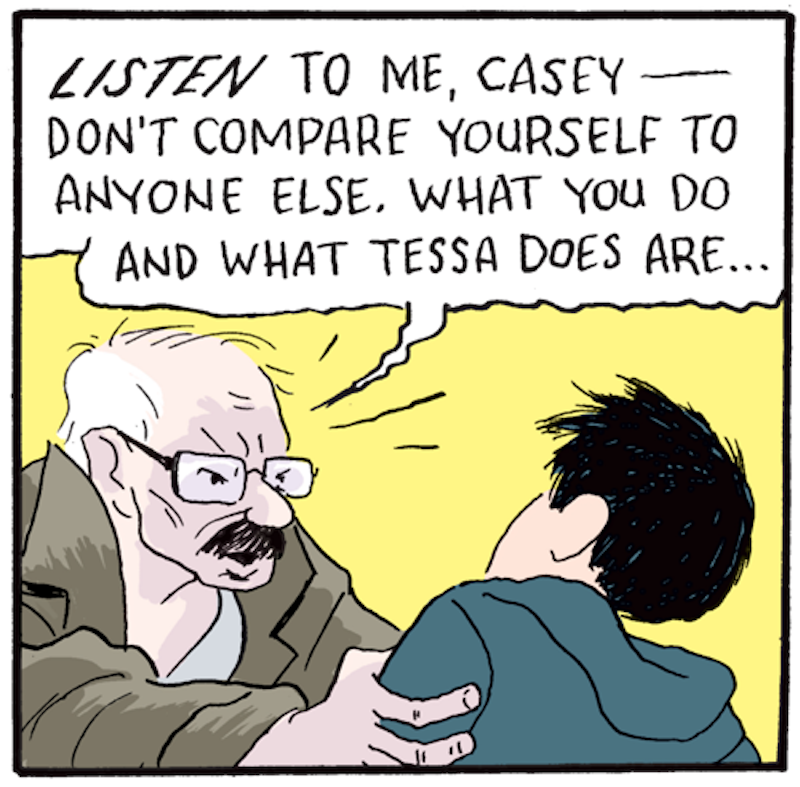 The worst is probably this stuff here: “The reason this comic kind of bugged me… I think the artist could have fixed most or all of these problems, or made them much less cringe-inducing… There is some not-so-great subtext… specifics in execution which were probably thoughtless and not at all malicious... I mean, a lot of things...” Realize that the person speaking has nothing to complain about. We get this ponderous, dragging, grudging mew—she thinks she's being so patient!—because the mealy-mouthed idiot read a comic about envy and self-doubt that mentioned a woman. That's it. That's the complaint.

The comic said nothing against the woman in question, an offstage character named Tessa. Tessa is a big success and very young, and that distresses a struggling colleague of hers in his mid-20s. What we see is the struggling colleague calling an older fellow, and the older fellow trying to buck him up. The bucking up fails. Tessa just raised $350,000 on Kickstarter, the young fellow announces, and the older man sags. The young man heads off, talking of grad school, and the old fellow pulls out his cell. “Hello, Ron?” he says. “Sorry to call so late, but I need to talk to someone.” It's a little story, neatly told. The joke that ties it together is in its title, “The Sponsor.” The older fellow is the younger man's sponsor, as in Alcoholics Anonymous. Of course, the older man needs a sponsor too. Like an alcoholic, he's in for a lifetime of this shit, of wondering if he has it and why other people seem to have it instead.

The two men, and Tessa, are cartoonists, but the lesson applies to any creative profession. Tessa is a woman and 21, but she could be anybody who's younger than you are and pulling ahead. Adults should be able to understand these things when they read fiction. But various parties looked at “The Sponsor” and, well, let's hear from the kickoff Tweet: “...I have a lot of respect for James, but all I see here are two white dudes complaining about a woman in comics.” James is James Sturm, who wrote and drew the comic. The tweet is from Colleen Frakes, who also does comics. Apparently she suffers from a disability, some sort of sensory-perceptual thing that manifests when she sees men speaking.

A Twitter discussion followed, and then a discussion on Metafilter. Nobody told Frakes about her perceptual difficulties. Instead people tightened their lips and shook their heads at the thought of the shambling “Sponsor” and its faux pas: “unfortunate choices… Ew, yeah, that feels more than a little gross… It's a little odd to see a young woman's success framed as a TRAGEDY for older male cartoonists... very weird... It's ok guys, lady cartoonists are not here for your jobs.”

Who said they were? Note that neither man in the cartoon says anything against Tessa. Nothing about her faking her way or pandering to a niche market. Nothing about the trendiness of young vaginas or the advantage that comes from flashing a leg. We hear about Tessa's book signings, book contract and Kickstarter money. We hear no suggestion at all that she didn't earn these things. The boy wishes he had them too, and he's wondering if maybe he's not that talented. That's where the pain comes in.

Remember how the older fellow calls Ron? Reading the discussion about “Sponsor” made me grateful that no Reagan fans had been triggered. “Kinda not thrilled by choice of RWR as late-night call recipient... Whither gravitas?” The back-and-forth gave rise to just one sentence worth treasuring, the somewhat huffy “this has been discussed at length during the period in time of the same tweet of mine that is referenced.” That makes up for a lot.