Ruthie Foster and the Gospel Impulse

Why she'll never top the charts. 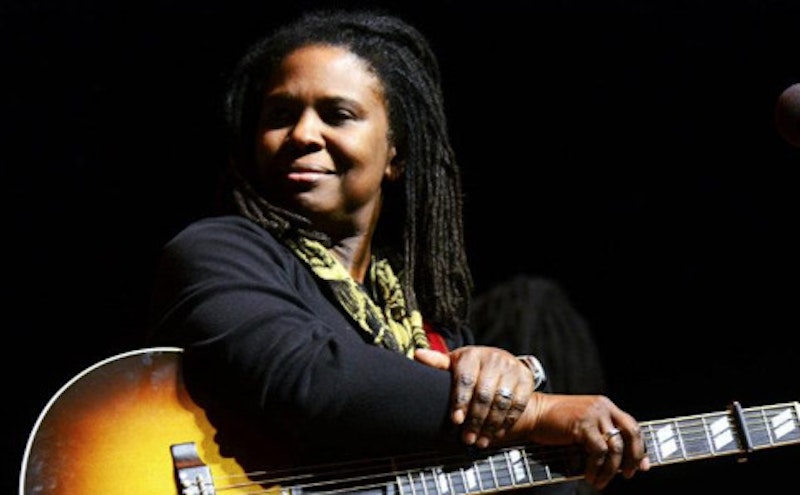 Promise of a Brand New Day is a fitting title for Ruthie Foster’s new collection of songs, because in the majesty and warmth of her voice, and the gospel passion of her soulful delivery, she offers the promise of not only a brand new day, but a better world.

If pop culture were not insane, Foster would have instant recognition on television and the Internet. The Grammy-winning blues and soul singer doesn’t have the fame of performers who are vastly inferior, but she does have a strong and loyal following. Some of those followers congregated in the Old Town School of Folk Music on Saturday October 18 to sit while she converted the intimate musical venue into a secular sanctuary for spirituality.

The title track of her new album, “Brand New Day,” is a Baptist church foot-stomper about the emergence of hope as a flicker challenging a sea of darkness. “Singing The Blues” is about the spiritual healing balm that is blues music. Theologian James Cone writes about how black people found the same source of energy and power in the blues hall on Saturday night as they did in the church on Sunday morning: “Meaning in a world that denies that your life can have any meaning.”

During her live performance, she treated every performance as if it was the key to her own redemption: from her new, original compositions to covers of contemporary favorites like The Black Keys’ “Everlasting Light,” and well-known Staple Singers and Johnny Cash songs.

Foster is the best kind of American artist, because she’s simultaneously an original and adherent to the long tradition of black gospel and blues. Her level of fame comes nowhere near her level of talent. If she did have a breakout hit, or a viral video, she would have no place in contemporary American music. Her music would sound decidedly foreign next to Taylor Swift, Beyonce, Rhianna, or any of the other superficial, sexualized pop songstresses of the American stage.

It makes one wonder if there is any room left in America for what Craig Werner, in his book A Change Is Gonna Come, calls the “gospel impulse.”

At its best, the gospel impulse helps people experience themselves in relation to rather than on their own. Gospel makes the feeling of human separateness, which is what the blues are all about, bearable,” Werner writes. He goes on to explain that “The gospel impulse consists of a three-step process: (1) acknowledging the burden; (2) bearing witness; (3) finding redemption. The burden grounds the song in the history of suffering that links individual and community experiences.

Werner identifies artists across genres who embrace and express the gospel impulse—Bruce Springsteen in rock ‘n’ roll, Mary J. Blige in R&B, and many obvious candidates like Mahalia Jackson and B.B. King.

Mary J. Blige is big star, but her career began in the early 1990s. What does it say for American culture that there is no longer a market for songs of redemption? It’s yet another indictment of an increasingly shallow and frivolous pop culture that Ruthie Foster cannot compete with Beyonce, or that, for another example, Esperanza Spalding cannot compete with Katy Perry.

The gospel impulse, regardless of religious belief, or lack thereof, is an essential part of the human story, and from the Civil Rights movement to any attempt to rise above heartbreak and setback on the individual level, it’s an integral part of the American story. Foster advances the impulse in her own way, and according to the experiences and priorities of her own life.

At the lip of the stage in Chicago, she joked about taking all the audience members to church. If she’s an evangelist—for the sake of American music and culture—one can only hope that her congregation continues to grow.