A Nipple for The New York Times

Try thinking of a nipple and the Holocaust at the same time. 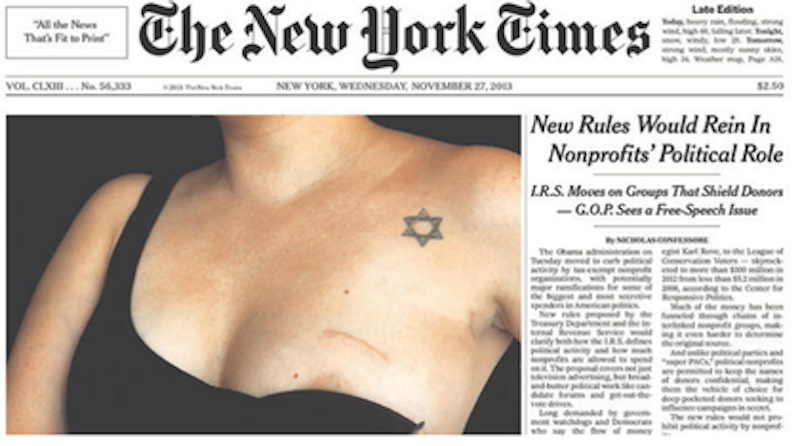 Recently The New York Times amazed the world by running a photograph of a half-exposed nipple on its front page. A woman's nipple, which is where the shock came in. A nipple fronting a breast that could inspire self-abuse in men who had fully intended to read about the Chinese economy or health care sign-ups in Kentucky.

The breast with the nipple crescent also included a surgery scar and a tattooed Star of David, since the photo ran above a headline saying “Push to Test for Cancer Gene Sets Up Dilemma in Israel.” That headline is so Times. It calls for a picture of somebody in a lab coat and a yarmulke, or maybe one of a cancer survivor in middle life soberly taking the camera's measure in a Tel Aviv cafe. I'm not saying these choices would have been better or worse, but they would’ve been characteristic. Even a picture of an ordinary, regular-person sort of breast, not the hot kind, would have been more Times-like. Having a hot girl's nipple wave hello is a Daily Mail choice.

A reader, at least this reader, does not resent the choice, but the reader does want to know what just happened to the Times and whether now the sky will rain frogs. The world seems to be shaking apart and a tremor just made its way through the brain of the Times photo editor. The nipple is welcome, but one must brace for what mystery comes next.

That's my response. Then we have the thoughts of Susan Silver, a citizen who wrote to tell the Times that its nip photo was “offensive on so many levels one hardly knows where to start.” In that case one might shut up, but Silver doesn't. “Have there been other nipples exposed on the front page?” Silver demands. “I doubt it. An African woman's breast so exposed? I don't recall seeing that.”

Plunging on, she ends up where you knew she had to go. A tattoo next to a scar? Oh, she tells us, that “opens the door to a variety of memories, thoughts and indecent connections to the Holocaust that struck me and some others as almost beyond explanation.” I have to agree, kind of. Silver's thoughts and mental connections do strike me as almost inexplicable.

She meant to say something else, of course, namely that it was baffling of the Times to present material that made her think of the Holocaust. I expect she gets baffled a lot. Many, many people can see a nipple without thinking of the Holocaust. In fact it's very hard for us to think of both at the same time. But get a scar and a tattoo in there and Silver's head begins to throb.

I find this offensive on so many levels. Well, two. Leave the Holocaust out of nipple debates, and figure out syntax before you write a public letter. Okay, three. Don't drag in the African women. There, I guess that's it.

The French, God bless them. Years ago Natalie Portman did a video for Saturday Night Live in which she posed as a badass rapper who likes to fuck shit up and grab her some poontang. The joke is that really she's a goody-two-shoes high-achiever. The video includes a nice moment when the pretend Natalie offers a smirk and slides her eyes down and away as she parries with an interviewer. “I never said I was a role model,” she mutters.

Which means, “Wow! That's the best! 'Suck my dick,' 'Fuck your mother' by one of the best-paid actresses of Hollywood really makes it. Hats off, Natalie, for recalling us to our simple condition of being human, violent and sexual.” Yeah, Natalie, your funny rap video grounds us existentially in the basics of human existence. Wouah!