A Hillsdale Champion of the World

A young writer has talent, but ought to lay off the self-aggrandizement. 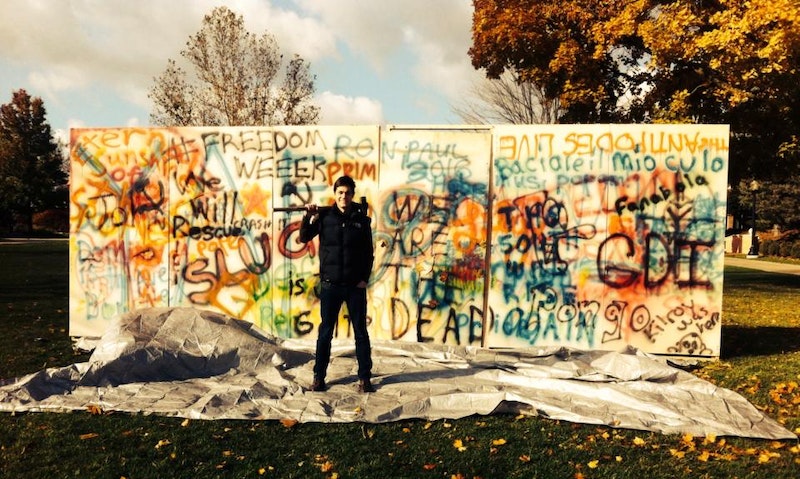 Last week I read a mildly provocative article in The Federalist, in which young Philip Wegmann recounted his first pre-college summer job, a stint he claims was the “best-worst experience” of his life. Never mind that Wegmann has a lot of best and worst experiences ahead of him, or that his self-congratulatory tone is a touch off-putting—his description of working in an ice-cream factory (location undisclosed) is vivid and nearly gives you frost-bite just reading it. Wegmann, a graduate of the conservative Hillsdale College, says his generation is hampered in finding work by “minimum wage laws, expanded overtime regulation, and outdated child-labor laws.” You can agree with that reasoning or not, but there’s no doubt that Wegmann wasn’t afraid to take a really crummy job to help with college expenses.

He cites a New York Times report that “less a third of teenagers landed a summer job last year” and that “Today teen unemployment has plummeted to levels not seen since the Carter administration.” And then he lards it on thick: “This isn’t just a career catastrophe. It’s a character crisis. Not only does that first job prepare young people for their career, more importantly, it shapes their character.” I won’t argue with the statistics he mentions, or that teens are shut out of jobs by desperate elders seeking any employment to stay afloat, but can’t really buy the “character” argument. Certainly it’s a broadening experience for young people to work—most out of necessity, some looking for bottom-level experience—but he loses me with the “character” conceit.

My first fulltime summer job—during the Nixon administration, 1973, which was also bleak economically—was cleaning rat trays for graduate students in a biology lab at Princeton University, and then killing the rats (and on occasion, cats and monkeys) once they’d served their purpose. I didn’t have to wear three pairs of long-johns like Wegmann, but it wasn’t glamorous: the windowless room where I worked stunk of rat shit (or the rodents who’d died overnight), and the endless feeding and sweeping was monotonous. But I was lucky to get the job: I was off to college in the fall, and needed the money. It happened that my mom, a very recent widow, worked in the university’s Firestone Library rare books department, and so I’d drive us both to the “office” each weekday, about a five-mile ride.

It definitely didn’t prepare me for my career—although some might say journalism isn’t all that different from rat waste—and as for “character,” I’m not sure about that either. (I’d say a college job of hawking Cokes, franks and beer at Baltimore’s old Memorial Stadium, where some fans would call for me instead of black vendors, was more eye-opening.) I needed the money; there was no other motive. And, in fairness, unlike Wegmann’s forays into the ice cream freezers, I worked at room temperature, fetid air notwithstanding. I’d also streamlined my duties for an eight-hour shift into about half that, simply by working fast and efficiently. That left me plenty of time to read newspapers—and since it was smack in the middle of Watergate there was no shortage of material—or gab with my boss Sam, a wonderful older man who was a lifer at the University. I far preferred Sam’s company to the haughty Princeton students who ordered me around, expressed astonishment that a minimum-wage teen like me actually followed the news instead of sniffing glue during the lunch break, and then upbraided me for pouring chloroform on the rats or cats—that’s not humane!—when it was for their research. And never mind that I’d get fired if I refused that duty. Real assholes.

I’ve no idea of the Wegmann family’s financial circumstances, Philip doesn’t let on, but unless the kid’s fibbing he worked his balls off. But, as he writes about his co-workers, older men who didn’t seek “character” but a steady paycheck, it’s as rich as the ice cream he moved from aisle to aisle. He writes: “There’s nothing inherently transcendent about becoming an accessory to juvenile diabetes… [But] earning their respect by making rate [a quota for gathering wholesale ice cream orders], joining that group by working hard: that was beautiful. They taught me the virtue of hard work, and I’m better for it.” (His sop to “juvenile diabetes” struck me as suspect; you get the idea he’d have worked at a tobacco factory or soft-drink plant had the opportunity arisen. A job’s a job.)

Wegmann’s a talented writer, but it’s unseemly to pat yourself on the back for a summer of manual work, especially when a white-collar career beckons. (The recent graduate is ambitious: in addition to The Federalist, he’s written for The Daily Signal, interned at the Heritage Foundation and was an Eagle Scout.)

I also found this paragraph minimally noxious: “Our parents could bus tables, pump gas, and bag groceries. But my generation has fallen on hard times. We’re losing an opportunity to learn the virtue of hard work.” So is Wegmann bucking for a “Voice of My Generation” credit, or just innocently toasting himself? Seems to me, the fellow is pushing the right buttons for a successful professional life, but maybe in addition to “character,” he could pick up some humility as well.