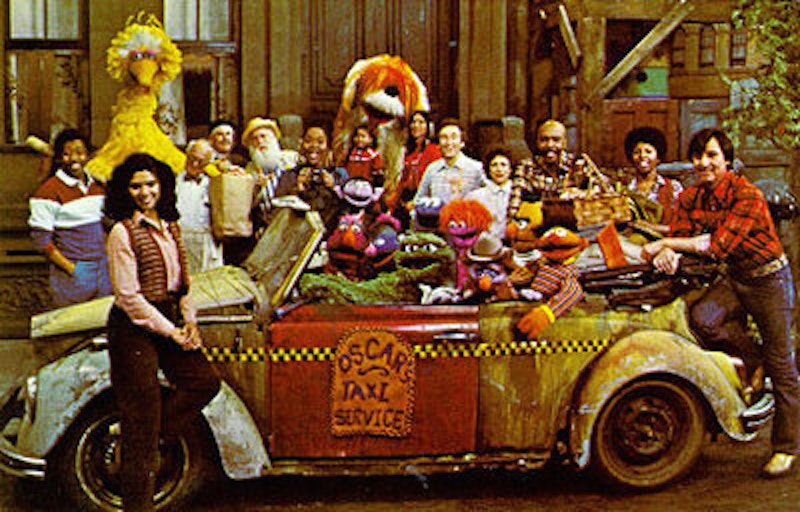 Before cable television, our TVs had four channels (and a few fuzzy ones on UHF). The three networks (ABC, CBS and NBC) held down the main clicks on the dial alongside a spot for public television. Sesame Street and I were born the same year, 1969, so I grew up with the show. This year we both turned 45. I still get excited to see the Sesame Street float at the Macy’s Thanksgiving Day Parade—it’s unbelievable how many of the cast members haven’t aged. Here are just a few of the great things to love about my childhood favorite show.

1. The musicality. Sesame Street is like a nearly half century old Broadway musical that still packs the house every night. The songs, especially some of the originals (“One of These Things Is Not Like the Others,” and “C is for Cookie”) are imprinted into the memories of many generations of kids of all ages.

2. The Count, who taught us math in vamp-tastic style.

5. Their website has a “Classic Memories” section which is cool though it unfortunately over-features Elmo. True Sesame old-school enthusiasts like myself don’t consider the over-commercialized, over-hyped Elmo a classic since he wasn’t part of the original cast.

7. The Twiddlebugs, who live in matchboxes and whatnot on Ernie’s windowsill, practically invented upcycling.

8. They flirted with the idea of making Cookie Monster healthy and turning him green and making him eat broccoli, but they never got out of hand with it. Now he just has to share cookies, but he still gets to eat them.

9. We learned to appreciate the people in our neighborhood (while Bob wore a purple velour turtleneck) even though they were still using the sexist terms “fireman” and “postman”; I’m sure Sesame would go "firefighter" and "postal worker" today.

10. Does anyone else remember that “1-2-3-4-5” funky, trippy pinball animation thing? Ah yes, of course there’s a YouTube video. THAT.

11. But before that was the red ball. Old school.

12. The simplicity of The Honkers.

13. The parodies and spoofs they’ve done of television shows and movies over the years are hilarious. The writing of the show is consistently brilliant.

14. On Sesame Street, we learned that races are all equal.

16. That opening song “Can you tell me how to get to Sesame Street?” creates a feeling of nostalgia like no other in our Generation X hearts.

17. Oscar the Grouch is the best character, fictional or non-fictional, of all time (which reminds me, I need to say "SCRAM!" more.) I mean, his worms went to the moon.

21. Sesame Street pioneered a lesson lost on Barney and Dora the Explorer and hundreds of other kids’ shows: parents will watch something that entertains them as well as their children. The humor and writing on SS can be appreciated by viewers of any age.

22. That this guy made such a great video compilation of Sesame Street memories.

23. We learned about being healthy. Sponsored by the letter H.

24. Ernie and Bert may share only a bedroom and not yet a bed, but they were gay before it was cool.

25. You can consider visiting the moon, but you really wouldn’t want to live there.

27. We learned the alphabet. COLD. (That typewriter.)

29. Jim Henson is one of the greatest artists and performers of our era.

30. Sesame birthed The Muppets; also fun to watch on many a childhood Sunday night.

31. They taught us how things were made before there was a whole channel for learning about stuff.

32. Ask hundreds of movie stars, musicians and other celebrities: you haven’t arrived until you’ve appeared on Sesame Street.

34. When Mr. Hooper died, we had to learn that sometimes people we love don’t come back.

35. We learned to appreciate art and colors.

36. Although I’m still annoyed at them for making Snuffalupagus real when he was supposed to only exist in Big Bird’s imagination, at least we learned for a while that having an imaginary friend was okay.

37. Those of us who worked in the food service industry learned how to be a great server from Grover.

38. Do you remember the Mahna Mahna guy? He was a bearded hipster before they existed.

39. We learned a little Spanish.

40. Seriously, what’s up with 90 percent of the original cast members still being alive and on the show? Fountain of youth at the 123 Sesame Street spigots.

41. Guy Smiley and his “Here is Your Life” series: carton of eggs, oak tree, loaf of bread.

42. Sesame Street is still relevant. This hilarious “Hip Hop Hooray” video, though technically a Muppets thing (Beaker!), features old-school Kermit in his trenchcoat and microphone; ever the consummate journalist and rapper.

43. It may have been an educational program, but we never watched it for that reason. Learning can be fun. You hear that, schools?

44. Life lesson: Sing. Sing a Song. And don’t worry that it’s not good enough for anyone else to hear.

45. It’s a puppet show that’s been going on for nearly half a century, and I hope it’s still around to see its 100th anniversary, too.