Ninjas and pirates are so last decade. 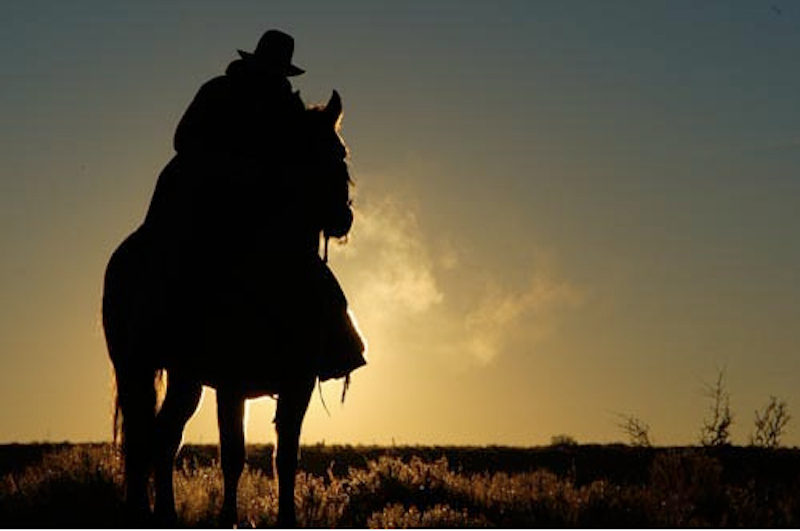 It’s been a very slow boil, like a pot of beans over a flickering ember of a campfire in the California desert, but cowboys are going to become the next “thing.” Mark my words. This runs deeper than our pop culture proclivities: it’s all just a reflection on the squirming weirdness that our collective subconscious retains about who we are, reduced to the simple language of fictionalized characters, metaphorical and digestible.

I don’t know where it began, but I recall us collectively falling in love with were the ninjas: creatures of subterfuge and secrecy, anonymity and ruthlessness. Sure, the animated Ninja Turtles were goofy, pizza-eating rapscallions, but the comic book Turtles were ruthless, angry beasts. Ninjas were one of the earliest characters on the Internet (if you don’t count the less widespread fairy-and-dragon community, and honestly, who does?), this great big weirdness in which anyone could be anything they wanted in nearly absolute secrecy. It was a fascinating kind of escapism that left little trail back to the truth, and even that faint path could be obscured if you were crafty enough. Then, the fascination wore off, and the trails became easier to follow, and the anonymity of night and streams of data were no longer enough to sate us.

Then came the pirates: men of equal ruthlessness, and an insular sense of specific honor among themselves, but possessing a willingness to break their codes in the interest of greed. There’s no secrecy about the actions of the pirate: they steal, and they steal by using cannons and bombast in broad daylight, not a quiet sword through your back. The brashness and mayhem matched the rise in file sharing and pirate movies starring Johnny Depp. We entered a psychological place where greed and acquisition were justified by some unspoken code and sense of entitlement, and it was intensified until we collapsed, and an economic recession pulled these standards apart. There was nothing left to steal.

Then came the zombies, who are omnipresent today. Zombies are creatures that amble around with a single-minded hunger after losing everything, and a unique need to perpetuate their existence, though they aren’t alive in a traditional sense: the only thing that matters is survival, and they’re not doing it very well. We’re crawling along, searching for the next glimmer of hope in a landscape that has been robbed of meaning and purpose. You really can’t get any worse than being a zombie. Maybe this seems like a bleak forecast, but it’s difficult to feel otherwise when you’re working long hours and multiple jobs in order to have enough to survive.

We’ve hit the bottom of the pop culture spectrum of quirky character demographics. Sure, vampires are a bit more vital than zombies, but the vampires that we’ve been given aren’t really vampires: they glimmer, own nightclubs, and just kinda suck. As the prophetic rebirth of 2012 approaches, the next great hope is the cowboy.

What better model for a return to the values that will save us? Cowboys are men of the Earth, men of honor, and men who are unafraid of working hard for their survival. I don’t think it’s an exaggeration to say that the world is entering a desperate place and that we’re poised to collapse upon ourselves if we continue to push deeper and deeper into the harmful cycles we’ve been trained to follow: a broken university system that doesn’t prepare people for employment, employment that rarely contributes to the good of mankind, and the perpetual vomiting of poisons and divisive anger into our planet and each other.

Let’s say that 2012 is actually going to be a time of great change. Let’s presume that the collective consciousness of our planet is aware of the supernatural (or very natural) threat that’s going to strike us in 2012, even if they don’t believe it, and that this day has a universal, emotional significance for nearly everyone on Earth. Maybe this momentum due to a belief in a false event is enough to spur us into change. When a thought becomes large enough, can it actually create a genuine shift towards unity? Have we ever faced such a pervasive threat of complete and total annihilation before? I’m pretty sure that everyone can agree that an apocalypse wouldn’t be cool. Who could weather the storm if all of our modern comforts fell apart?

The only answer is the cowboy, and the good old belief that the Earth is enough to sustain us, and eliminate us if it needs to. We’re in a closed system, and scientifically, the Earth will work to equalize itself, so we need to work alongside it. Zombies, ninjas and pirates wouldn’t last the weekend. Hand me my spurs.