Who Is Paul Krugman Voting For?

Like the politicians they cover, media professionals have personal agendas that clash with their public personas. 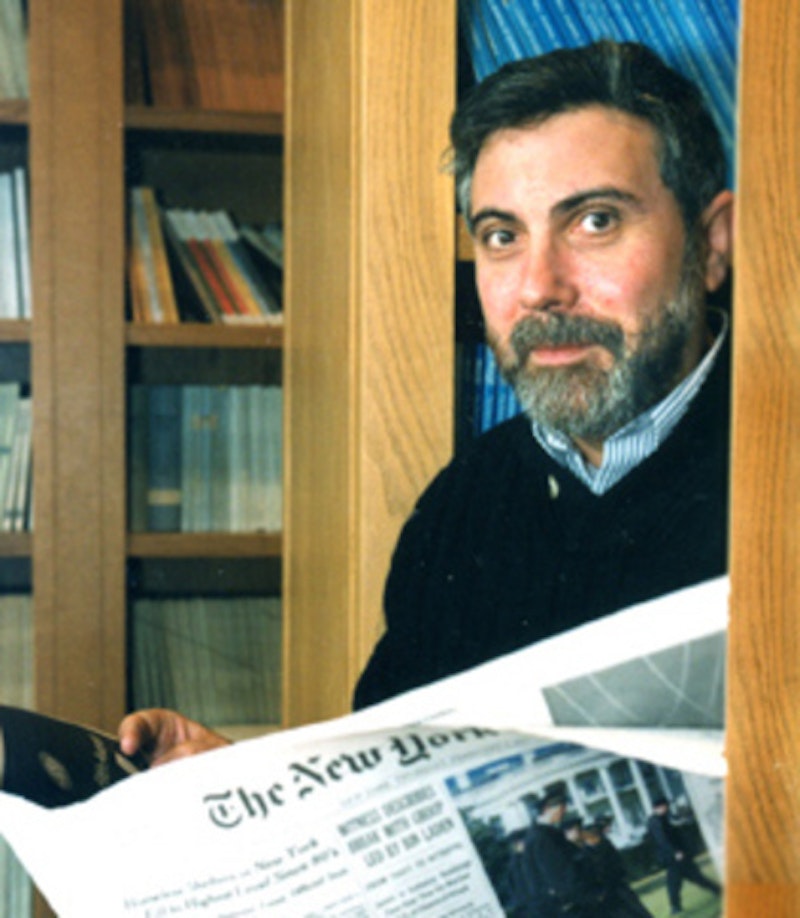 This isn’t a trick question: Who do you think New York Times op-ed columnist Paul Krugman will be voting for in November? It would appear, at face value, to be a slam dunk that Krugman, the relentlessly angry economic populist who writes for the Times twice a week—only that newspaper’s polite stylebook rules prevent the Princeton professor from issuing broadsides that would put him in the over-the-top bonkers company of Keith Olbermann, Rush Limbaugh, Sean Hannity and Lou Dobbs—will triumphantly pull the lever for Barack Obama, and help rescue the United States from the miscues, real and perceived, of the Bush administration.

Krugman dumbfounded a large percentage of his adoring readership this spring when he hammered Obama again and again during the first-term Illinois senator’s bitter primary fight with Hillary Clinton, but confronted with the possibility of John McCain winning the general election, it’d be inconceivable that the pundit would ally himself with the bad guys.

I’m not so sure. It’s counterintuitive, certainly, and obviously not an admission Krugman would make in public or private conversation—not at all dissimilar to voters telling pollsters they’d support a black candidate and then do the opposite in the ballot booth—but you can never be too cynical about the motives of the men and women who comprise the ridiculously bloated mass media. An Obama victory would, at least if he keeps his campaign promises, result in an overhaul of a tax system that he, and Krugman, insist rewards the extraordinarily wealthy while shafting the middle class and underprivileged. It would be a return to the relative economic equality that Bill Clinton—for whom Krugman has nothing but praise on this score—instituted during his first term as president. In fact, when it was clear in late April that Hillary Clinton was all but vanquished, Krugman had this advice for Obama: “Let’s hope that once Mr. Obama is no longer running against someone named Clinton, he’ll stop denigrating the very good economic record of the only Democratic administration most Americans remember.”

However, in the grand tradition of Looking Out For Number One, Krugman might ask himself, “How do I prosper from an Obama presidency?”

The columnist/professor undoubtedly has an annual income—over $200,000—that will put him on the Democratic hit list; although even if he minded paying higher taxes, and who really knows about that, the affluent have access to accountants and tax attorneys who can soften, if not eliminate, the blow. More importantly, if Obama, Harry Reid and Nancy Pelosi run roughshod over a bedraggled Republican minority in Congress starting next January, passing legislation that Krugman agrees with, how in the world is he going to fill his Times quota of 800 words twice a week? Even if he nibbled and quibbled at the margins of a Democratic agenda, making penny-ante criticisms, it’d require a complete makeover in Krugman’s public persona—he didn’t start at the Times until Clinton’s last year in office—and after eight years of material handed to him by Bush, Cheney and all the other liars, cheats and frauds that are the bread and butter of his joyless columns, his track record isn’t long enough to know if he could make the transformation from the grouchy old uncle to an exuberant, cheerleading Obamacan.

In fairness, Krugman’s predicament—at least by my reckoning—isn’t his alone. It’s no secret in the media world that conservative Fox News has dipped in ratings the past couple of years (not as precipitously as Bush’s, but the station has lost ground to CNN and even the amateurish MSNBC), so it’s also fair to wonder who Rupert Murdoch is pulling for in the election. If his past were any indication, it’d be Obama—although fundamentally conservative, Murdoch’s primary allegiance is to his own bottom line.

Likewise for Limbaugh: he’s become such an institution, that most people don’t remember that his listenership exploded during Clinton’s eight years in office. And Olbermann (not to mention less pretentious television personalities like Jon Stewart and Stephen Colbert) will have difficulty mustering his daily throat-clearing of indignation if he actually agrees with the president. So, I’d put those liberals down for McCain. (Not so for “Talking Points Memo” blogger Josh Marshall, John Judis, the Nation’s staff and The Atlantic/Washington Monthly crowd, who are annoyingly self-righteous in their hate for anyone associated with Bush, do come off as sincere. As for the brawling Daily Kossacks, your guess is as good as mine.)

But Krugman’s a far more interesting case; one, because despite his persistent the sky-is-falling-and-the-next-Great-Depression is upon us fulminations which so delight his high-brow (and often wealthy) proponents, the man is not the buffoon that cable television practically requires its talk show hosts to morph into. While patrons of the liberal salons in Manhattan and Washington might get a hoot out of Olbermann’s outrageousness and ostentatious self-aggrandizement, Krugman is Taken Seriously, an oracle who is spoken about with great reverence.

I find it fascinating, and quite admirable, to witness the political schism between the Times’ very liberal editorial page and Krugman. Members of the editorial board, however hypocritical they may be, are certainly Obama voters, and, more than that, echo the candidate’s message of the urgency for a post-partisan era in Washington. On Aug. 25 a Times editorialist bemoaned, for about the 100th time this year, the gutter politics that define modern presidential campaigns. “It is only August and the race has already become too nasty.” The writer goes on to mostly blame McCain, but challenges Obama to “inspire hope and a sense of unlimited possibility.”

Krugman, on the same day, has a different take: “The Obama campaign… doesn’t need to convince voters either that he’s the awesomest [he really used that word] candidate ever or that Mr. McCain is a villain. All it has to do is tarnish Mr. McCain’s image enough so that voters see this as a race between a Democrat and a Republican. And that’s a race the Democrat will easily win.”

It could be that Krugman’s desire for another Republican administration to lacerate over the next four years is subconscious; at least that’s the charitable explanation. But I don’t think so: there’s no doubt in my mind that Krugman believes in the economic theories he champions week after week, but an Obama win will strip him of a very powerful platform, and politicians aren’t the only ambitious men and women in the public eye.