Seeking compromises between the status quo and LGBTQ liberation hardly helps at all. 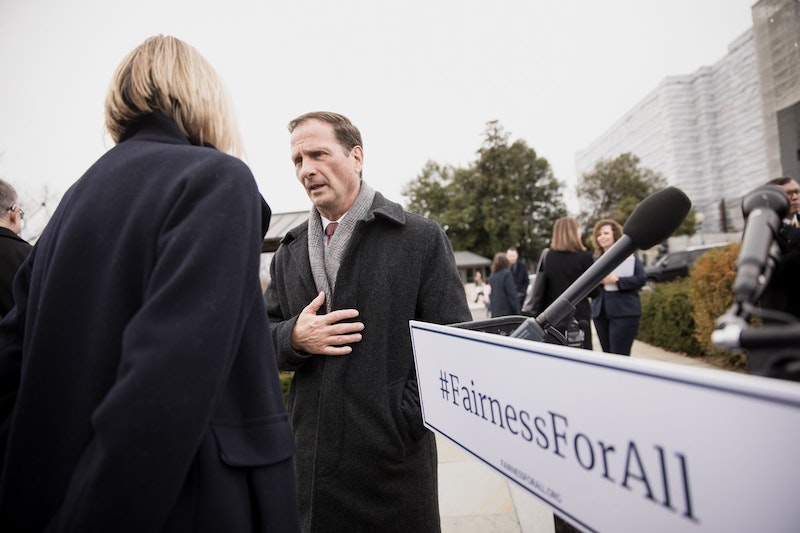 Last Friday, Rep. Chris Stewart introduced the Fairness For All Act which seeks a compromise between LGBTQ rights and religious liberty. According to Vox, the bill will protect LGBTQ people from housing and employment discrimination, but “there would be exceptions for medical providers with religious objections to providing transition-related health care to trans people, and some gender-specific spaces like bathrooms could bar trans people from access.” The bill will also give religious organizations the freedom to discriminate against LGBTQ people in adoption, foster care, and education.

Civil rights organizations such as the Human Rights Campaign, GLAAD, and the NAACP among others released a joint statement condemning the bill shortly after it was introduced. “This legislation is deeply dangerous for many reasons,” the statement reads, “mainly because it would erode protections that already exist for people based on race, sex and religion, rolling back protections that have been on the books for decades…. Our nation’s existing civil rights framework already strikes the right balance when it comes to the government’s interest in protecting religious freedom and advancing nondiscrimination, and it is wrong to put into law a different system of protections for LGBTQ people and their families.”

The controversy over the Fairness For All Act is similar to India’s trans rights bill. The Transgender Persons (Protection of Rights) Bill, passed by the Indian Parliament on Nov. 26, prohibits anti-trans discrimination in education, employment, and healthcare, among other areas. However, the bill also requires trans people in India to register with the government in order to be fully recognized. Not only that, but a trans person won’t be legally recognized as their true gender unless they can prove they’ve surgically transitions, which can be very expensive. “This is in contradiction of the right to self-determination mandated by the court,” 23-year-old trans man Vihaan Vee told the Washington Post. “This is almost like forcing our bodies into surgery.”

Here in Talbot County, MD, the local LGBTQ community is fighting against the Board of Education’s nondiscrimination policy for not being inclusive enough. On October 16, several members of PFLAG Mid-Shore attended a Talbot County Public School Board meeting to voice their concerns about the BOE’s plans to readopt an old student nondiscrimination policy which would eliminate the terms “sexual orientation” and “gender identity” and list “sex and gender” instead. By not explicitly listing sexual orientation and gender identity, the nondiscrimination policy can create loopholes where anti-gay bullying and denying trans students access to facilities that match their gender identities are allowed. The Board seemed interested in the concerns, but voted on readopting the old policy without the inclusive language anyway.

The Talbot County Public School BOE recently faced a lawsuit when St. Michaels High School trans student Max Brennan sued the Board for his right to use the boys’ facilities. The lawsuit ended last year with a settlement that granted Brennan his wishes, but it was just for his situation. Nothing about Brennan’s case prevents Talbot County public schools from barring other trans students from using the facilities of their choice, and the non-inclusive language in the old student nondiscrimination policy doesn’t help.

Seeking compromises between the status quo and LGBTQ liberation hardly helps at all. Policymakers must listen to LGBTQ people’s needs and concerns. Without doing so, systemic homophobia and transphobia will continue in a never-ending cycle of lip-service and half promises that only serve to make authorities feel better about themselves.