What Would Make Me Vote for McCain?

Here are some things the tanking Republican could do that might allow young voters to take him seriously. 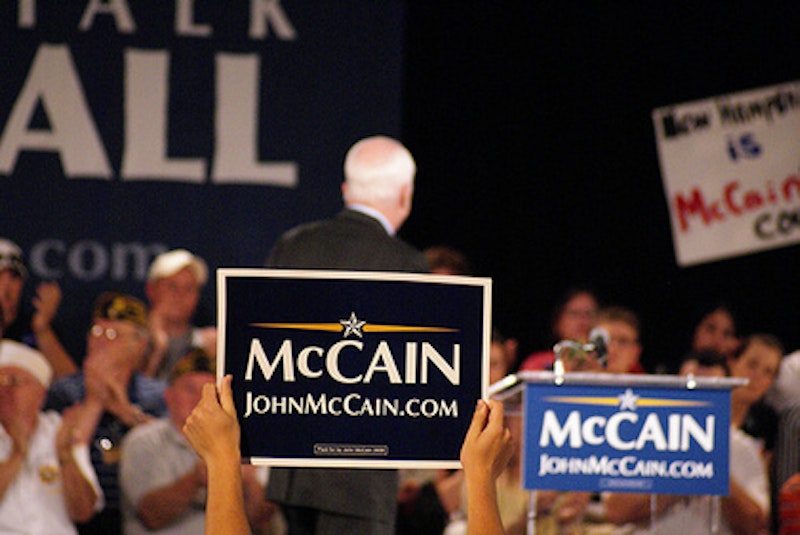 I remember very distinctly the patriotic goosebumps I got last fall driving down Huron St. in Ann Arbor when I thought about the coming election. There was a chance, however unlikely, that I would get to live through a real brawler between two political heavyweights, the first election in my lifetime where I would be undecided at the outset. If only my candidates were picked.

In one corner stood a man I heard about first from a photographer who used to work at the Daily, a man with a name I couldn't remember who was running for Senate in Illinois and, thanks to the single-track mind of Alan Keyes, might actually win. He did. And when I saw him give the keynote address at the Democratic National Convention in 2004, he was my candidate. Senator Barack Obama. The cheers in the Fleet Center were even louder than they were on television. And now that man was doing what we all wished he would've done four years prior—run for President.

And in the other corner stood Senator John McCain, a man whose career I respected and politics I admired, whom I wanted desperately to win in 2000 and whose campaign was dealt a defeat by my fellow South Carolinians, to my great embarrassment. But now he was back in the ring, in part due to that same fickle state. You'd be crazy even to pray for something so far-fetched. Political goosebumps.

I don't think I was alone in that feeling. Nor was I alone in the deep disappointment that followed, when McCain's campaign dipped into Rovian tactics that were proven to bring victory, no matter if they compromised his character in the process.

Now, with the second debate in the past and the Armchair Electoral College employed by the major news networks already deciding the election for Obama, we have time to ask a very serious hypothetical: What would make me vote for McCain?

Pronounce "Senator" as three syllables, not two
I'm okay with McCain calling Barack “Mr. Obama” or even “that one,” but I cringe instinctively when he blunders through Obama's proper title. I'm not asking for an Alan Keyes level of articulation, but at least strive for something higher than Lou Holtz, won't you, “Sen-nor” McCain?

Re-Hire Mike Murpny as your Campaign Manager
A large part of that Straight Talk magic that we saw on the campaign trail in 2000 was due to the very candid Mike Murphy (you may remember him being rather too candid about Sarah Palin without realizing his microphone was on). Murphy knew how to talk to the press and, more importantly, how to let his candidate talk to the press. With him went the sense of devious fun that always seemed to follow John McCain. Now, only the deviousness remains.

Fire Sarah Palin
Forget that the Palin-Biden debate was ruled a tie. Remember that the standards for a Palin “win” were so low she could have forced a tie by detailing how to properly field dress a moose, if only she was coherent while doing so. Admit to the American people that politics can sometimes be more about image than substance. Elected officials shouldn't resemble the average American, they should resemble the best American. I want McCain to find someone who fits this description.

Explain how politics work
In his 27 years in the Senate, I'm sure McCain has stories of backroom deals, of good bills bloated and sabotaged with amendments, of frustration and corruption and small glimpses of triumph amid the bureaucracy. After 27 years, I'm sure McCain has mastered the minutiae more than most—certainly more than Obama. I want to hear what Obama doesn't know and will likely never learn in the Senate. McCain has experience and I want to hear about it.

Now, I admit the possibility of McCain doing even one of these is even more far-fetched than his South Carolina win. This time, the Armchair Electoral College are probably right—this won't be McCain's year, just as 2000 wasn't. After this second chance, he won't get a third.

But this means that McCain will go back to the Senate, where he'll be just as self-effacing as always, and just as effective. And let's be honest—this is exactly where we all want John McCain. Probably, this is where John McCain, the real John McCain, wants to be too.