Secession: Maybe Not a Bad Idea

Lincoln's healing efforts aside, perhaps the U.S. should be two separate countries. 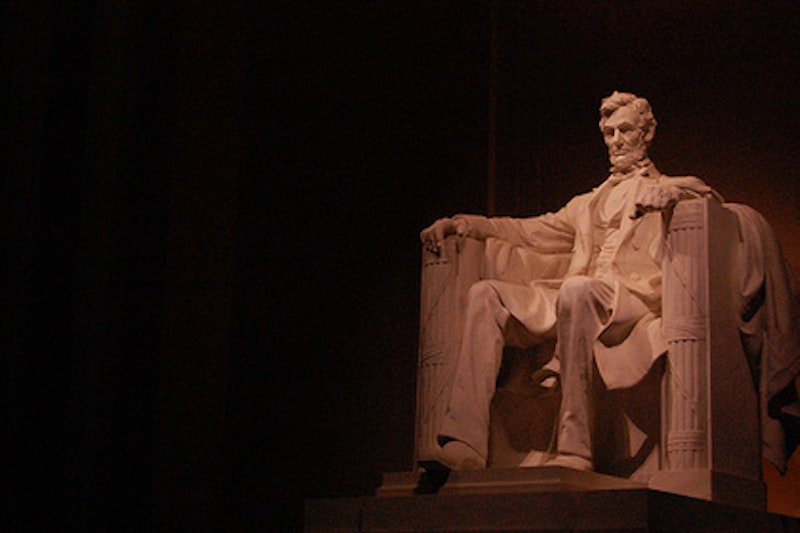 You know things in our great nation are in a mess when people start talking smack about Abraham Lincoln. There are a few figures in American history who are the bedrock of our greatness and beyond reproach: men like Washington, Lincoln, FDR and King. For leaders taken too soon in the height of their greatness like Lincoln and King, it seems even more gauche to question the consequences of their passions so late in the game.

Yes, honest Abe (a Republican, let us remember) had the courage to officially end slavery and champion equal rights for all Americans. Sure, he rose from utter poverty and overcame bouts of crippling mental illness (in an age without Xanax) to rise to the highest office in the land. True: despite his “one year” of formal education he wrote eruditely and gave thoughtful and rousing speeches that children from Plymouth Rock to Pebble Beach (myself included) have been forced to memorize to this day. He may or may not have been the first famous American figure to have a goatee.

My question is this: what didn’t Lincoln do? Why, in the last few weeks, have I heard people, in quasi-jest, chide Lincoln for one crucial decision that would forever change the shape and nature of our country for centuries to come.

Secession, I mean. The ludicrous idea that, yes, this massive and incredibly varied land could (and perhaps should) exist as two independent nations—The Union and The Confederacy; similar in their democratic origins, but quite different in their policies towards more sensitive and moral quandaries. Slavery for instance. Was Lincoln, as a leader, perhaps too giving, too optimistic, or even deluded in his idea of how united our country could and should ever be?

Offensive and random as it may sound, let’s swap out slavery for another ticklish and visceral topic: abortion rights. In general the red states oppose them and the blue states seek to keep them.

Looking back, it would seem obvious that the party that was deemed most “conservative” at the time (in this case, Stephen Douglas’ Democratic party) would have the most conservative view on the subject at hand—in this case that slavery should be protected and not abolished. White farmers had every right to keep African men and women on their property to harvest their crops. Hard to argue with them since our own founding fathers had hundreds of slaves on their properties too. Today, likewise, the conservative right says that abortion and the act of choosing to terminate a pregnancy should be utterly illegal.
The conservative “thing to do” in Lincoln’s time was to oppose giving African American slaves the right to be free and the conservative doctrine now is to oppose giving women the right to choose. The frightening thing is, both sides, in both times, were utterly convinced that their way was the “right” way. As in what God would want.

Here’s the big question: Should one half of the nation be forced to adhere to policies that the other half deems barbaric? We’ve seen the pictures of fetuses torn from wombs on billboards before—it is scary and does merit deep consideration when it comes for making real laws. But for many of us who may have had a “close call” in a relationship or even had a friend or family member experience the harrowing moment when this abortion “choice” had to be made, we know first hand that abortion is anything but a callous “easy-way-out” or a band-aid to cover up a debauched, promiscuous lifestyle. Things happen and the final decision is just what I mentioned: harrowing. Still, to think that half of the country or more believes that women (or their loving partners for that matter) shouldn’t even be free enough to make a choice at all? This is a fundamental break.

Again, let’s talk two countries—both able to represent the fundamental beliefs of their constituents. Why should one half of the nation’s moral compass be trumped by the other? Why should the science-crazy blue states be ruled by the religiously faithful red-state morality if the blue states lose just one state in the Electoral College during an election? Here’s another thought, Mr. Lincoln: What if the country is simply too large and diverse of opinion to unite? And finally, I’ll ask you: why must we unite at all?

In this year of arguably the most important presidential election in United States history, with North and South again splitting into bitter shades of red and blue, have Abe’s well-intentioned but dim-witted chickens come back to roost?
Let’s talk about the South for a bit. For red-state conservatives this is both their bread and butter voting bloc, their myth center and their breeding ground for enthusiastic, hard-spined, church-going common folks who keep our nation “real” with their country-fried, small-town, old-fashioned family values. Family values, you say, Mrs. Palin? But Dixie leads the nation per-population in violent crimes, gun crimes, drug crimes, hate crimes, truancy, illiteracy, domestic abuse, rape, and divorce. Concepts as banal as global warming and evolution, long ago proven in the scientific community, are defiantly ignored or even denied in evangelical rural communities in favor of Christian story-book theories like creationism which believes the earth is no more than 4000 years old.

Backwards, we say? Who am I to say that God is not looking over my shoulder? How can science-minded Chicagoans or New Yorkers or Los Angelenos convince a religious Mississippian their way is the wrong way? And maybe their way isn’t the wrong way, it’s just their way.

In all seriousness, it would seem that the South, (that is, the eternal red-state) is just a tad behind the times. While the rest of the country begins to slowly pass legislation that, somewhat grudgingly, gives basic rights and protections to pariah groups—blacks first, then working women, homosexuals, same sex-couples, the handicapped and so on—the eternal “Red” state grumbles and groans at the thought of ever doing the same.

Problem with Abe was that he was clingy. Like an overly protective father, he didn’t let the rebellious South leave home when it wanted to. Like an overly-protective father, he wanted to keep the whole family of young states together for better or worse. Let’s be honest: in every family there are bad seeds—the delinquent sons who blame their mothers and fathers for all their bad habits, who blame teachers for their ignorance and blame society, once they get slapped down, for their lousy place in it. They steal and maim and kill and continue, each night, to eat happily at mom and dad’s supper table because, no matter what, they are still part of the family, right?

Wrong. When is enough enough? Abe insisted that we keep the 11 states of the Confederacy as part of our “united” nation—despite the history of institutionalized bigotry, militaristic, Christianity-inspired-policies (“With God, Our Vindicator” being their motto) and an economy built almost completely around the concept that men could force other men, women and children, who they captured, to work for free until they died. When cancer is detected in the body the natural thing to do is to cut it off, zap it, burn it, get rid of it. Or in Abe’s case, just let the suckers go. So why did he fight so hard to keep the Confederacy attached to the Union’s body? Would Illinois and New York and California not survive without Alabama, Georgia and Florida?

As November approaches and we ready ourselves to cast our votes—I wonder what things would be like if Lincoln had let the country become two countries. Would it still be two today? Would we be better or worse? Maybe there would have been more civil wars, maybe certain states wouldn’t know which side to align with. Probably it is absurd to even think about when there are far more pressing matters at hand.

For the first time in my life, I speak to my fellow countrymen and when they tell me they are gung-ho Republican, gung-ho swift-boat vote, gung-ho Iraq, gung-ho anti-gay marriage, gung-ho pro-life, gung-ho creationism in schools, gung-ho McCain-Palin, (gung-ho bleeding red) I look at them and wonder—who are you? Do I know you? Can I even talk to you? How could I really be close to you? And these are my friends and neighbors. This is my family. We root for the same sports teams, eat at the same cafes, go to the same doctors. We live in the same country. And yet?