What it Means When a City Loses its Paper 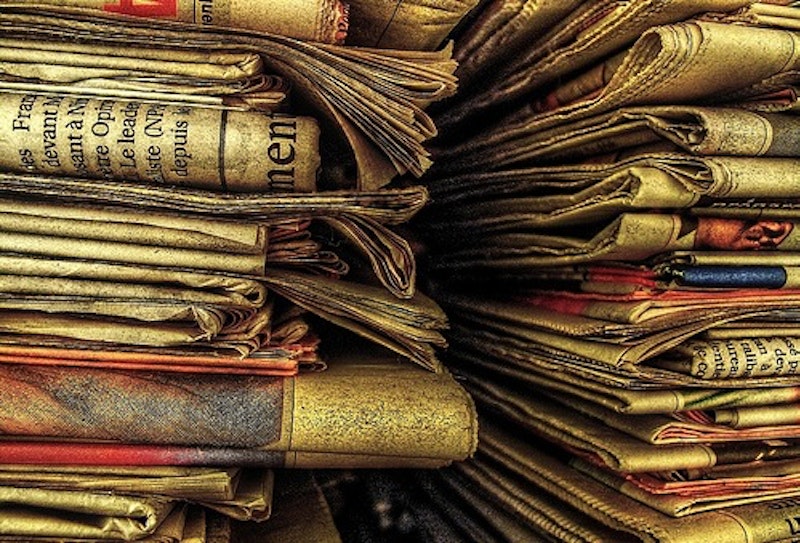 The newspaper that wafted onto your doorstep this morning, with a featherweight whisper instead of yesteryear's thud (indeed, if one did at all), is headed for an antiquary museum. The cultural anthropologists who deal with this stuff tell us that the print product is deader than a pterodactyl.

The Sun is not alone. The New York Times lost seven percent of its paid daily circulation and The Washington Post lost six percent of its paid readership. The circulation of USA Today, journalism's shake-and-bake newspaper, lost 17 percent because a cutback in travel has affected its airport and hotel sales. The only paper to gain circulation was The Wall Street Journal, up one percent to the top of the heap. At the same time, Newsday has begun charging $5 a week for its online content, similar to a model that failed and was abandoned by The New York Times several years ago.

Consider this thought for a moment: When the printed media is gone, and the freelance loonies, citizen reporters, bloggers, pranksters and YouTube crazies take over, who's going to be watching the scalawags and the government apparatchiks. Case in point: The Sun's ferreting out of the City Hall slush fund that's supposed to help underprivileged people but instead helped to underwrite Mayor Sheila Dixon's inaugural. (One of the foundation's major benefactors was uber builder Willard Hackerman, who was in line for a major no-bid contract which was pulled from the Board of Estimates' agenda a week before the story appeared. Somebody smelled something.)

There was a long-ago time, in the Mad Men era of the 1960s, when the Sun was ranked by Time, itself on the endangered list, as one of the top 10 newspapers in America. Today, the Sun, with an immediate metropolitan circulation area constituency of about three million, isn't even listed among the ABC's top 25 newspapers by circulation numbers.

Without newspapers, Oprah will reign and People will set the American agenda. Think of a world of information dominated by Sean Hannity, Glenn Beck and a few other screwballs who use their First Amendment rights to contaminate the news pool by conflating opinion with fact. That's how petri dish rumors, without editors and fact-checkers, are incubated and assume a life of their own outside the dish.

What happened to newspapers over the last 20 years is complicated. But briefly, for a business that deals with the new and the now, newspapers missed the biggest story of the last two generations even though it was right in their face. People no longer read. They scroll. And in the process they miss half the content. But OMG! Nobody really cares. Lately, though, there's been a sudden recognition that newspapers are a cornerstone of an informed society. The scaled-back news coverage, to one degree or another, by every newspaper, large and small, has an impact far beyond their immediate readers. And that is a greatly diminished news pool which feeds other news organizations, primarily radio and television, which rely on them as a source of information because they have nowhere near the news staff that papers employ.

And when the overall news pool is reduced, the entire community is less informed than when the news industry is sparking on all cylinders. The two costliest ingredients in the newspaper business are reporters and newsprint. The Sun, like most other newspapers, has lost many of its veteran reporters through a series of buyouts and has cut back significantly on its news coverage and presentation.

Through the slow and tortuous death of newspapers, however, others have prospered handsomely. Newspapers, primarily, spend small fortunes to support reporters and editors who provide the content for other news outlets such as Google, Yahoo! and The Huffington Post, who've profited, to one extent or another, at newspapers' expense. Newspapers have vowed to put an end to the pilfering of news content, if they can figure out how without damaging themselves.

Among the first to publicly declaim a newspaper's bedrock value to the community was Sen. Ben Cardin (D-MD). Cardin proposed what amounted to a government bailout by using the nation's tax code to provide relief for small community newspapers. His idea was to create a non-profit category, sort of like a 501(c)3, for newspapers if they met certain conditions, i.e., they would not be allowed to endorse candidates. He was followed by Sen. John Kerry (D-MA). Finally, hearings were held in the House of Representatives to consider the future of newspapers. They were sparsely attended. One witness was Baltimore's David Simon, a Sun reporter before he gained fame as the creator and producer of The Wire television series and who lamented the death of newspapers of record.

Next there appeared a recent lengthy report from Leonard Downie Jr., former executive editor of The Washington Post, and Michael Schudson, a professor at Columbia University's School of Journalism. Their proposal for newspapers' salvation incorporated Cardin's idea of the tax break as well as subsidies from foundations and philanthropists for local reporting; a redirection of public radio and television toward local reporting; using college and university as institutional sources of local reporting; creating a national fund for local reporting; and the increased use of government and non-profit organization information for analysis and reporting.

But there is a chilly wariness toward even whiff of a relationship of any kind, especially financial, between government and the press. In Baltimore, for example, there is an undercurrent of criticism within the journalism fraternity of The Jewish Times for accepting a low interest relocation loan from Baltimore City to underwrite its survival as a niche publication and its most recent request to suspend payments on the principal of the $150,000 loan.

Yet newspapers are up against not only their own fragile mortality but also the here-and- now fascination with electronic gadgets that abbreviate and compact information that takes less time to read than a haiku. There is a tactile pleasure to the inky printed product that just can't be replicated by the Internet, or Kindle or a Blackberry. The success of the morning newspaper used to be tied directly to the breakfast (and other habits) of America. So be angry, be offended, let your blood occasionally boil. But be careful what you wish for. A major city without a major metropolitan daily newspaper is a greatly diminished city. Just think what the scalawags would get away with if there were no one watching.

Frank A. DeFilippo has been writing about politics for many years as an award-winning Maryland State House and political reporter, White House correspondent for the Hearst News Service and as a columnist and contributor for several newspapers and magazines as well as a TV and radio commentator. DeFilippo has reported from six national political conventions.