Too Complex for the Highlight Reel

ESPN's black-and-white journalism sells, but it's too simple for politics. 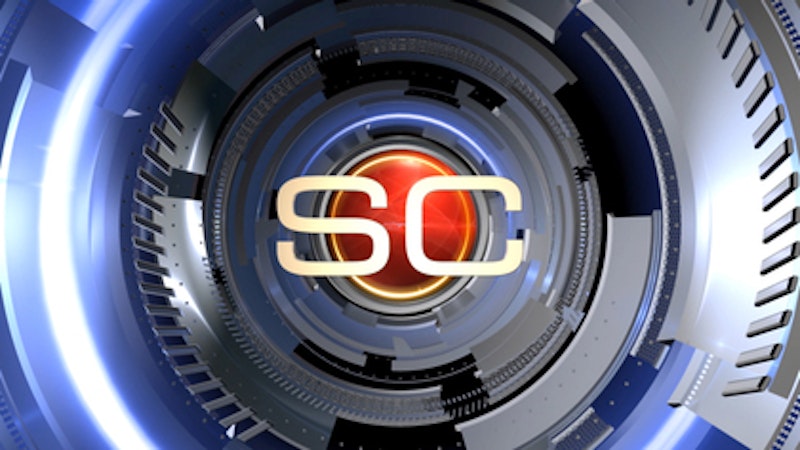 There is a sublime kind of genius at work in the production concepts of ESPN. At virtually any time of day a viewer can tune into one of ESPN's many media properties and, within 15 minutes, see some sporting issue neatly cleaved into two opposing perspectives. Sometimes one commentator is forced to provide yes-or-no opinions in a contrived exercise, like the (I'm not making this name up) Coors Light Cold Hard Facts "Six Pack" of questions. More often the contrivance is presented as a debate between two experts. The questions are arbitrary, the answers typically meaningless and speculative, but the experts know their role and play it well. They yell, and insult each other, and try their hardest to never agree. Entire half-hour shows with flourishes like point values, flashy graphics, and running clocks are built around the idea of the dueling commentators.

This constant bombardment of short, snappy bits of synthetic argument is ESPN’s genius. Philosophers from the time of the ancient Greeks have observed the deep human need to have the world explained to us in black and white, good and bad, yes and no. ESPN has taken this old insight, applied it to the information-rich world of sports, and strategically married it to the ecology of modern media. Who had the best draft pick, the Falcons or the Raiders? Are last year's Red Sox the greatest team of all time, yes or no? Nobody involved cares about whether the answers to these silly questions are correct or not. What's important is that sides are taken clearly and concisely enough that the meager attention spans of the audience grasp the terms of the argument without realizing how artificial the set-up is.

As a result sports commentary on ESPN ends up mirroring sports itself and opinions can be divided as clearly as competing teams on the playing fields. This communications style is harmless and even a little fun when the subject is as innocuous as sports. But, as contemporary media technologies continue whittling away our ability to concentrate for more than five minutes, the ESPN-ization of the media is skewing our ability to communicate as a society. Unaccountable and flashy opinion-makers that construct false dichotomies for the sake of argument are fine for football. They’re not acceptable when we need national discussions on complicated issues touching on history, politics, and culture.

For example, suppose we needed a discussion on the electability of America’s first black president. A discussion where we talk about the changing identity roles a black man must navigate as he advances in a white-dominated career; talk about the shifting company he keeps at different points in his life as he grows into a public figure; talk about the occasionally contradictory groups he must appease as he necessarily seeks to be both a product of black culture and to transcend it. Add in a little psychology about the “blackness” of a man of mixed race who grew up across the Pacific rim and whose decendents weren’t slaves. Then talk about the meaning of latent racism and how to deal with it. That’s a discussion that doesn’t break down cleanly into two opposing soundbites. That’s a college semester’s worth of discussion, and our media appears to be structurally incapable of having it.

In our short-fused, artificial, two-sided media environment, anything that takes more than a paragraph to explain gets buried. Anything best understood as shades of gray instead of black against white becomes muted. But oversimplifications, codewords, and outright lies that are consistently repeated stick. Savvy political figures understand this ESPN effect and use it to manipulate the public conversation. It’s been a feature of the 2008 presidential campaign so far, and despite Barack Obama’s remarkably successful efforts to rise above the normal constraints of political discourse, his opponents will continue to hammer their “message” as methodically as a mechanic smoothing out a fender.

Say you’re threatened, scared, or otherwise made uncomfortable by the prospect of a President Obama. You think that associating him with our nation’s historical distaste for angry black men will hurt his campaign. Here’s what you do: find a major media outlet. Set up your own artificial yes/no argument by asking whether Obama must “answer” for attending Rev. Jeremiah Wright’s church. Then say yes, ignore Obama’s actual answers, and reference Wright’s angry black bogeyman statements. It’s like having your own Coors Light Six Pack of Questions, except that you’re undermining democratic discourse instead of breaking down a playoff game.

George Will, country club conservative: “Wright's paranoias tell us something—exactly what remains to be explored—about his 20-year parishioner.” Ah ha! Something dark and mysterious is out there to be found, like Kurtz exploring the Congo.

Michael Gerson, moralizing former Bush speechwriter: “A smart, passionate pastor such as Wright naturally wants his views to influence his own congregation. He has every right to ask Obama, ‘Have you just now noticed my most basic beliefs? Have you really been asleep in the pew for 20 years?’" See, Obama can’t disagree with Wright, or at least he shouldn’t if he’s a good Christian.

Ed Koch, crotchety old Clinton supporter: “He has not explained why he sat in the church's pews for 20 years without complaint.” That’s not true: Obama delivered an entire speech explaining that.

The kamikaze campaign controversy piloted by Obama’s old pastor is the latest example of a multi-faceted issue of national importance getting distorted in the media for political advantage. Judging by the results in North Carolina and Indiana it obviously hasn’t derailed his campaign. But we haven’t seen the last of Rev. Wright, or other examples of “the politics of division and distraction” as Obama put it in his speech Tuesday night, because division and distraction are operationally fundamental to the modern news media. Division and distraction is its bread and butter, the key to a desperate bid for eyeballs and advertising dollars when so much information is now available for free. Traditionally campaigns, especially losing ones like Clinton’s and McCain’s, are happy to ply the media with disciplined message politics. Obama’s campaign isn’t perfect, but as a candidate he’s shown with issues like race and the gas tax that sometimes principle overrides easy answers.

ESPN’s genius works. For the past decade the sports network has been remarkably profitable, carrying once dominant sister companies ABC and Disney on their back. ESPN has made itself essential to the lives of practically every sports fan and professional athlete by building an empire where nuance is sacrificed for the sake of simplicity; entertainment outweighs accuracy, and the biggest sin is to leave your audience with an ambiguous conclusion.

But sports are diversions, something that can be endlessly and simply argued about becuase the results of a game don’t cost 4000 American lives in Iraq. Games don’t have anything to do with the executive branch’s erosion of the rule of law, or economic policy favoring the rich at the expense of the poor, or the legacy of racism. Those issues are decided by politics, and in politics sometimes the truth doesn’t fit onscreen in a colorful banner graphic. It’d be a welcome change if our leading media outlets realized the difference.