This Time It’s Tolkien Versus Trump

And it doesn’t look good. 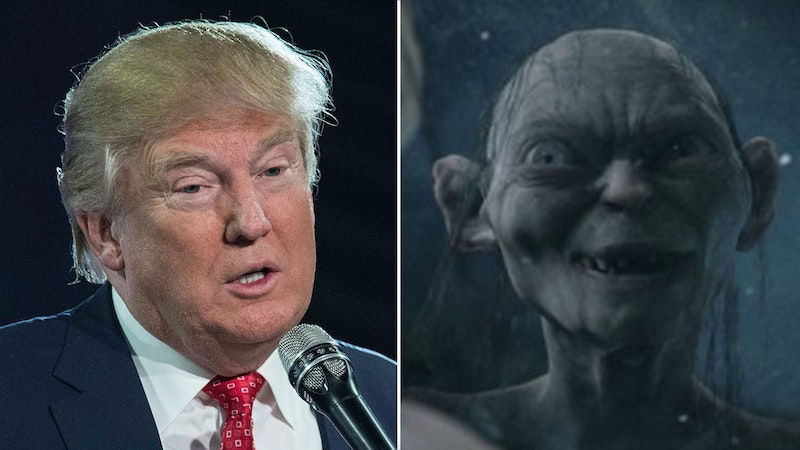 A while ago I wrote about George Orwell and how he would’ve despised The Lord of the Rings as mere snobby bullshit and Christian propaganda. For the wrap-up I reflected on the irony of the situation. Lord of the Rings is probably the most beloved novel ever written, and it does celebrate the values of a Christian conservative. But its millions and millions of copies are sold in a world that J.R.R. Tolkien would’ve found disappointing if not horrifying. After all, I said, look at Donald Trump, and I proceeded to suggest that “when we hear about the power of ideas and stories, we might notice that this power doesn’t always click in.”

The obvious answer is that Donald Trump tells stories and peddles ideas. The Apprentice told the same story over and over, a story about Trump’s shrewd judgment and tough character. During the 2016 election cycle, candidate Trump repeated this story plus complementary material about the dumbness and crookedness of the people in charge. Next thing you know fools voted him into office, and the conservative movement trotted along after the fools. Accordingly, I must refine my proposition… I meant smart ideas and good stories, he said helplessly. At least the people who toot about this stuff do. I reference Percy Shelley (“unacknowledged legislators of the world”) and every MFA grad or professor who has discoursed on the power of “Story,” capitalized, as opposed to story, the thing prized in screenplays. Oh, now and then the tooters may point to Superman or Star Wars as prize examples. But the song is all about the litterateurs’ caste, and the caste chiefly packages frissons and subtle insights. These things have their value, but perhaps they don’t have so much in the way of power, as in the power to shape people’s beliefs and behavior.

Consider the LOTR–Apprentice match-up. The written tale’s champion in this battle, meaning Professor Tolkien, was himself from outside highbrow literary circles. He was an intellectual, but not in any way that fit with their outlook. The literature he read and cared about the most had dwindled away half a millennium in the past. Worse, the literature he produced seemed very much like fiction and not literature at all. When he wrote, Tolkien wanted to entertain—not just that, but definitely that. Tolkien the author wanted his fellow professors to sit up straight and grip their pipes while he read them his pages on Khazad-dûm and the fight against the Balrog. Just the names alone must’ve been deal-breakers for so many respectable litterateurs in London and, eventually, New York. Expected to take that business seriously, they’d feel their self-respect shrivel and revolt.

Or they would have if these reputable memoirists, poets, and crafters of searching, mordant fiction had ever reached that far in the book. I bet most of them never started. W. H. Auden might glom onto the saga in his eccentric middle age, but liking this kind of thing meant being a big kid. The people who were creating and appraising the approved sort of fiction didn’t want to read about adventure and neat stuff, or about a simple battle between good and bad. The prevailing mode was “paradox, tension, and ambiguity,” to borrow a phrase from Alfred Kazin. Tolkien left out the ambiguity and skipped the paradox, and his metaphors displayed zero tension: the Ring plopped comfortably across the immortal human impulse toward self-seeking. Moral tension in the book took the form of Frodo Baggins, a small English gentleman with hairy feet, struggling to keep intact in himself the virtues taught by English schoolmasters. Loyalty, courage, and self-control might be palatable when Ernest Hemingway tricked them out as existential authenticity and presented some exotic real-world place as his backdrop. But Lord of the Rings set forth the values plainly and in a setting that had to dumbfound sophisticated readers. Decent modernists could only gape at this coelacanth work, one with no use for anything that literature had learned except for paragraph breaks, quotation marks, and some transmuted provincial realism that got the book going.

Most of the period’s approved poems, memoirs, and mordant fictions are forgotten now. Lord of the Rings, that middlebrow monstrosity, lives on. Still, I don’t blame the highbrows for their preferences. Picking apart a psyche does tend to be interesting; celebrating good character often isn’t, even when the character’s tested. Adventure’s fun but only for a bit, and neat stuff depends upon who’s defining neat; the intellectuals may have their own sense of what novelties and diversions will buck a person up. Indeed, though my definition extended to a name like Khazad-dûm when I was 12, it doesn’t quite get there now. But when the next producer of flossy word-art (I know that sounds bitter) pronounces on the subtle power of the written dream, let them reflect that they’re not at the business end of the apparatus. The big work is being done lower down, and judging from Trump vs. Tolkien it gets bigger as the altitude drops. A middlebrow out-influenced the intellectuals, and then a brute out-influenced the middlebrow.