Why do some conservatives insist on praising dead Democrats? 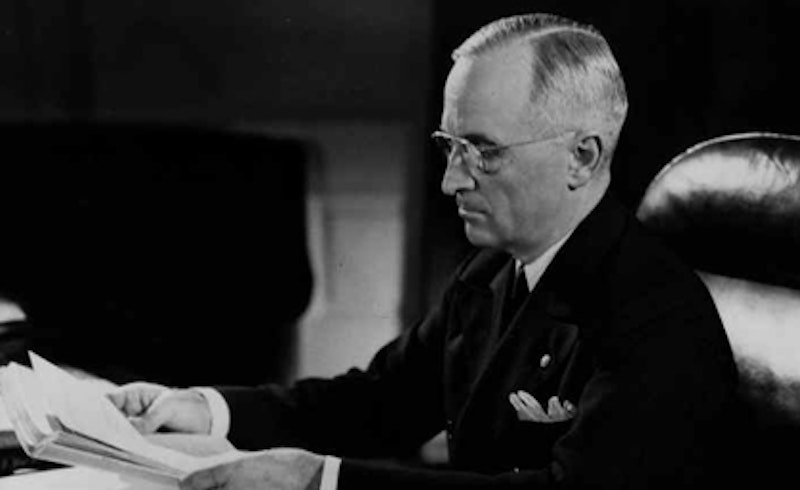 Listen to Sean Hannity’s radio show on almost any day and you will hear him engage in a rhetorical trope that grows more annoying with every rote repetition: “FDR, Harry Truman and JFK!”

Hannity’s habitual invocation of three Democratic presidents from the middle of the last century is intended to depict these Great Americans (to use another mind-numbing Hannity tic) as bipartisan symbols of patriotism, embodying a noble legacy that today’s unpatriotic and ignoble Democrats have betrayed.

Such paeans to “good Democrats” might have served a partisan purpose for Republicans 20 or 30 years ago. The liberal consensus collapsed in the 1960s and 70s, putting into play millions of disgruntled Democratic voters disgusted by the misguided blunderings of Hubert Humphrey, George McGovern and Jimmy Carter.

In order to be elected in 1980, Ronald Reagan needed to appeal to lots of those ex-Democrats, including many older voters who, like Reagan himself, had actually once voted for Franklin Delano Roosevelt. Portraying his Democratic rival as unworthy of the mantle of the sainted FDR was a way of subverting partisan loyalty in the opponent’s camp. To be truly loyal to the principles of FDR, Reagan suggested, long-suffering Democratic voters must reject the ridiculously incompetent Carter.

Roosevelt, Truman and Kennedy had asserted a robust and confident American role in world affairs. FDR led the nation through World War II. Truman presided over the dawn of the Cold War and battled the communists in Korea. JFK managed the difficult task of presenting himself in the 1960 election as a more militant anti-communist than Richard Nixon, and promised in his inaugural address that America would “pay any price, bear any burden, meet any hardship, support any friend, oppose any foe” in the “long twilight struggle” against the Soviet menace.

Compared to these flag-waving warrior Democrats, Carter simply didn’t measure up, nor did Walter Mondale in 1984 or Michael Dukakis in 1988. Had it not been for the collapse of the Soviet empire after 1989, which diminished the importance of defense and foreign policy in most voters’ minds, Bill Clinton might never have been elected in 1992.

It was during the 90s, however, that Republican tributes to the holy trinity of FDR, Truman and JFK became ubiquitous, thanks to Newt Gingrich and Rush Limbaugh. Gingrich openly praised Roosevelt’s political skills and, when he became Speaker of the House in 1995, emulated FDR’s “first 100 days” template in pushing the GOP’s Contract With America. Limbaugh not only praised Roosevelt, Truman and Kennedy on patriotic grounds, but frequently pointed out that JFK cut taxes as president.

Limbaugh even went so far as to praise arch-liberal Hubert Humphrey, who had advocated nationalized health care as early as 1948. In his 1993 book, See, I Told You So, Limbaugh wrote: “Humphrey was the last of his kind ever to be nominated by the Democratic Party. . . . He was anti-communist. He was pro-American. . . .  But one could never question Humphrey’s patriotism, nor his support for traditional American values.” (I tend to share Hunter S. Thompson’s appraisal of Humphrey as “a shallow, contemptible and hopelessly dishonest old hack.”)

Of all the dead Democrats who are now routinely praised by Republicans, none is less deserving of such plaudits than Harry S. Truman. In discussing Sarah Palin’s sudden emergence from obscurity last week, Peggy Noonan wrote: “But there was a man who came from nowhere, the seeming tool of a political machine, a tidy, narrow, unsophisticated senator appointed to high office and then thrust into power by a careless Franklin D. Roosevelt, whose vanity told him he would live forever. And yet that limited little man was Harry S. Truman. Of the Marshall Plan, of containment. Little Harry was big. He had magic.”

Magic, bah! Truman was woefully unprepared for the presidency and was so immensely unpopular that he quite nearly destroyed all the goodwill the Democratic Party had accumulated during Roosevelt’s presidency.

Noonan euphemistically calls Truman the “seeming tool of a political machine,” but there was nothing “seeming” about it. Truman was a creature of Boss Tom Pendergast’s viciously corrupt Kansas City regime. Pendergast’s mobster cronies turned Kansas City into “a seething cauldron of crime, licensed and protected,” as one federal judge declared. When it came to vote fraud, Pendergast’s electioneering tactics made ACORN look like Girl Scouts. Truman’s 1934 Senate election was won with a campaign of terror by the Kansas City gang that left four men dead. One of the seldom-mentioned scandals of Truman’s presidency was the early parole in 1947 of four members of the Chicago mob who had been busted on federal conspiracy and corruption charges. A year later, the mob repaid the favor by helping swing Illinois for the Democrat, as Sam Giancana’s brother boasted: “Boy, does Truman owe Chicago . . . . Jesus, we had to beg, borrow and steal to swing the son of a bitch. . . . No way the man doesn’t know who got him elected.”

Truman’s status as a Cold Warrior is not exactly flawless, either. Truman withheld badly needed support from Chiang Kai-shek’s anti-communist forces in China—thus making Mao’s conquest easier—and in the Korean War famously refused to allow U.S. forces to bomb the bridges over the Yalu River that were the communist supply line to China.

Meanwhile, Truman also blocked efforts to uncover Soviet espionage and subversion. To this day, most Americans don’t understand that Sen. Joseph McCarthy’s investigations began in response to a Truman administration cover-up. M. Stanton Evans documents this clearly in his McCarthy biography, Blacklisted by History. The FBI had identified dozens of security risks in the State Department and other key federal agencies, but in March 1948 Truman signed an executive order denying this information to congressional investigators. It was an election year and Truman obviously wanted to put a lid on the scandal. The administration’s policy of non-cooperation made it impossible for Congress to find out what had been done about these cases, many of which involved genuine Communist Party members, a few of whom actually were Soviet agents.

It is now customary to denounce McCarthy as a demagogue, but no one could ever out-demagogue Harry Truman in his 1948 campaign. “The Republicans have begun to nail the American consumer to the wall with spikes of greed,” he said, branding the GOP “gluttons of privilege,” and calling his mild-mannered Republican opponent, Thomas Dewey, a “fascist.”

Perhaps Sean Hannity genuinely admires such vicious and dishonest rhetoric, and Peggy Noonan really does mean to praise the eloquence of the same Harry Truman who told a rally in Iowa, “This Republican Congress has already stuck a pitchfork in the farmer’s back.” Maybe I’m just blind in not seeing how the conservative cause is advanced by Republican hosannas for a virulently partisan Democrat who vetoed the Taft-Hartley Act.

Sixty years after Truman was re-elected with a plurality of the popular vote, surely there can be only a few octogenarians who still think of themselves as Truman Democrats. Why attempt to conjure “magic” with Truman’s name in 2008? Did Reagan campaign for the White House in 1980 by citing Warren G. Harding?

A bad precedent is being established. In another decade or so, Republican pundits might begin praising the achievements of that bipartisan, patriotic exemplar of conservative values, Bill Clinton. God help us.